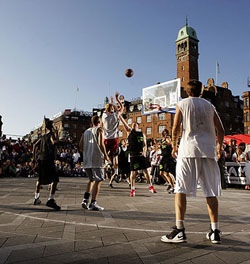 Down all game, four-time GAM3 (pronounced “game”) tournament champions Schemeteam fight their way to a 2-point advantage over upstart Brooklyn10.

Brooklyn10’s red-headed wingman drops a right elbow jumper in traffic to balance the board.

Schemeteam inbounds to Stickman, their jet-propelled point guard. Stickman dribbles near mid-court, waiting for the chance to strike. The crowd smells blood, holds its breath.

Stickman swings the ball to the left wing as star forward Andre Foreman drifts past the arc, steps cleanly into the pass, pivots, turns, fades, and fires with form as cold and precise as a ticking shot clock.

It would have been a classic duel on any court, in any borough, in any city, in any state. What made this one special is that it took place in Radhuspladsen, Copenhagen’s central square. This past weekend, Danish non-profit GAM3 hosted its seventh annual tournament, the largest streetball tournament in Scandinavia, marking another growth year for Danish streetball. Danish streetball? you ask. Yes, friends. It may not be played above the rim or with the same level of style that you would find at the Rucker or West 4th (watching the games was a bit like viewing the streetball version of NBA footage from the 50s—fundamentally sound fakes, rolls, and

cross-overs were a little short on individual flair) but skills, heart, and a solid stream of beats were in full effect.

Sitting in the overfull stands, you got the sense that in a few years a very serious crop of ballers will put Denmark on the playground map. In addition to 20+ courts of continuous hoops and a bangin’ sound system were an impressive break battle featuring bboys from France, Denmark, and Spain and a girls’ pop-and-lock dance troop. Friends, ask anybody in the full-all-day bleachers at center court: there is something to this streetball scene in Denmark.

The Thursday before the big day, Simon Prahm, GAM3’s co-founder and managing director, told me that one day he sees the GAM3 tournament blooming into an international event “like the original Olympics, for amateurs. You won’t need to have a sponsor for your water and you won’t have to train for nine months a year.” Just as in its current manifestation, the tournament would have different skill levels that entrants could choose from. The idea is to keep the level of competition in balance with the fun and to encourage participation.

It’s just this combination of ambition and accessibility that allows the GAM3 tournament to heat up the stones of the Copenhagen’s central plaza with style and camaraderie. Now in its biggest year to date with 144 teams in 8 divisions, the tournament draws squads from Jutland (the big land mass in Demark connected to Europe), Germany, Paris, London, Beruit, and, once in a while, the States. Male and female participants range from 12 years old and up with 3-on-3 and full court games taking place simultaneously at two locations in the city.

While Prahm notes that the arrangements for the tournament are “a little cheap,” he knows GAM3 is still in its rise. Their budget recently swelled to close to $3 million courtesy of the Ministry of the Interior. Construction is underway on an indoor facility behind the GAM3 offices. The converted warehouse building will feature several asphalt courts, a mezzanine equipped with a dj booth, dance studios, and a parkour studio. The plan is to have Jordan (as in No. 23) cut the ribbon later this year. So, while GAM3’s focus remains on the kids at the local court, they are thinking big, knowing that that is what got them this far.

Streetball has become an international sensation with notable tournaments in France (Quai54), Germany, Spain, and Japan. Denmark, via GAM3, brings something new to the world’s local court: service and integration. To understand how pressing are the issues of immigration and integration in Denmark all you have to do is ask the nearest Dane (you may have to visit Denmark or take my word for it). Thus, while entertaining, the tournament is merely the most visible part of GAM3’s larger mission to facilitate play and cooperation between social and ethnic groups. For their efforts, GAM3 won t

he Danish government’s integration prize last year. It’s refreshing to hear Prahm point out that “integration is a two way street” and that they are initiating studies to see how they can improve their outreach and perfect their mission.

Since its founding in 2002, more than 38,000 participant have shown up for GAM3 in Denmark and the Middle East. They operate clinics at outdoor courts throughout Denmark as well as in Cairo and Beirut. At these clinics, coaches with strong characters and basketball backgrounds teach kids the fundamental of streetball. Many of these kids don’t have regular access to sport so GAM3 has resolved to “bring the street to the kids.” Prahm acknowledges, “It’s hard to get the hard-knock kids” but adds that “we might get their younger brother or sister.”

The idea is to recruit a cross-section of society and have them compete with and against each other; kids in tough neighborhoods are just as desirable as kids in the suburbs. As far as the somewhat paradoxical notion of initiating a formal clinic for the teaching of streetball, Prahm insists that it is a practical measure. “The kids are not going to go with boring,” he notes. So GAM3 uses the cultural capital of hip-hop to bring kids in and to keep the atmosphere hip. They try to keep it youthful, too; the average age for a coach is 25. When I asked Prahm whether or not GAM3 ran the risk of becoming too successful and going square, he laughed and said one way he kept up was by being paranoid about just that. “Once you turn 9 you stop being cool.” But he also pointed out that “kids understand that it’s not just about being cool. It’s also about life.”

If you grew up in Denmark then you’d know that basketball wasn’t the likeliest means to GAM3’s ends. As Prahm put it, the three major sports in Denmark are soccer, soccer and team handball. Growing up, he chose hoops as a way to form an identity. But thanks to the appeal and marketing potential of hip-hop and by extension str

eetball, hoop has become a way to reach out to young people in Denmark, Lebanon and Egypt. Who cares if basketball is still a niche sport? Prahm points out, “If you make 0-10 layups you actually have the highest potential for improvement. Improvement is addictive.”

Keeping the small world of Danish hoops thriving and expanding is Schemeteam (ST), a crew of schemers, MCs, bboys, promoters and designers who sponsor a team in the men’s and women’s elite division. This year, they captured the women’s elite division as well as the dunk contest and the break battle. ST represents the pinnacle of Danish street culture. They have a clothing line and regularly host parties in Copenhagen. Their relationship to GAM3 is a symbiotic one. As Rufi Malik, a GAM3 clinic coach, original ST member, and assistant coach for this year’s squad put it, “GAM3 got our name out there.” The GAM3 tournament serves as the perfect vehicle for ST to prove their clout.

All the fans are looking for is a good time, and ST seemed destined to deliver on all counts. Conversely, the more the schemers can promote their gear and talents and expand the market for hip-hop culture, the greater pool of interest GAM3 can draw from. ST donated prizes in several divisions and their logo was stenciled over several of the backboards at Israel Plads (the secondary site for games) where ST member Adonis was MCing keeping the crowd informed and entertained. If Malik and Prahm can turn their dreams into reality, Danish streetball will keep improving and eventually produce a squad that can actually take down ST For now, they are proving that streetball and schemin’ have local appeal and worldwide potential. Lookout world, they’re on their way!

As for the finale: fades, fires…net.

Schemeteam did it again! You should have been there, but I have a feeling if you wait a little longer, GAM3 will come to you.