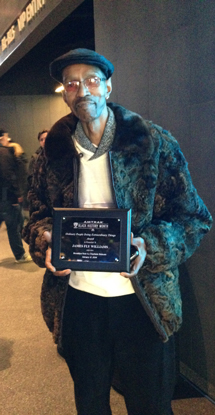 There was a different type of ‘Brooklyn chant’ echoing through the Barclays Center on a Wednesday night this month.

The Brooklyn Nets’ month-long Black History Month celebration took place for the final time this year, and featured a significant member of Brooklyn’s basketball history—a legacy that set the stage, or cleared the court, for the basketball community’s warm welcome of a professional team into the borough a year and a half ago.

Family and friends cheered as NCAA, ABA and street basketball legend, James “Fly” Williams, was called to center court shortly after the Nets began dominating the Bobcats in the second quarter. Escorted by Brooklynettes Siobhan and Nefertari, Fly—adequately dressed as dapper as his namesake—smiled as he was presented with the Brooklyn Nets “Ordinary People Doing Extraordinary Things” award.

Though widely recognized for his tremendous skill and panache he brought to NCAA, ABA and playground basketball, this night, Fly was applauded for his work with the youth of Brooklyn and the Brownsville Recreation Center. Fly explained: “It’s about the kids. They may not have ever came to a game before, but they came today so that was a big thing. I’m not big on recognition these days. I’m glad they got recognition today by being able to come to the game.”

Nike, a notable supporter of Fly, helped to give the students an experience they’ll never forget. They immortalized the event by creating 100 commemorative t-shirts bearing the honoree’s name and No. 35 jersey number, which is also the amount of tickets they provided for the community of family and friends Fly serves, to attend.

Special guests in attendance included Rick Telander, Jack “Black Jack” Ryan and Bobbito Garcia. Telander, sports writer and author of Heaven is a Playground, flew in from Chicago to attend the momentous occasion. Heaven is a Playground features Fly along with Nets legends and fellow Brooklynites Albert and Bernard King. Fellow streetball royalty Black Jack Ryan, also born in Brooklyn, drove in from New Jersey to be a part of the celebration as well. Black Jack was also a co-star with Fly in the critically acclaimed pickup basketball documentary Doin’ it in the Park, co-directed by streetball sage/player/announcer/coach Garcia.

Bob Costas, who was a young broadcaster at the Spirits of St. Louis while Fly was on the team, could not be in attendance for the occasion because of his Sochi Winter Olympic duties. Costas still shared his sentiments: “I will always fondly recall what a dynamic and exciting player Fly Williams was as a member of the ABA’s Spirits of St. Louis, and how much I enjoyed calling the games in which he played. But, to see what he has now made of his life, and how much good he has done and continues to do for others, makes me proud to be his friend.”

While fans came up to him asking for photographs and autographs during the halftime break, Fly reacted to the evening’s events: “This is better than playing here. Just knowing Brooklyn was in the house and that I got recognition from the loved ones around the hood, is what it is. I’m a little overwhelmed it will probably hit me when I’m by myself, at home.”