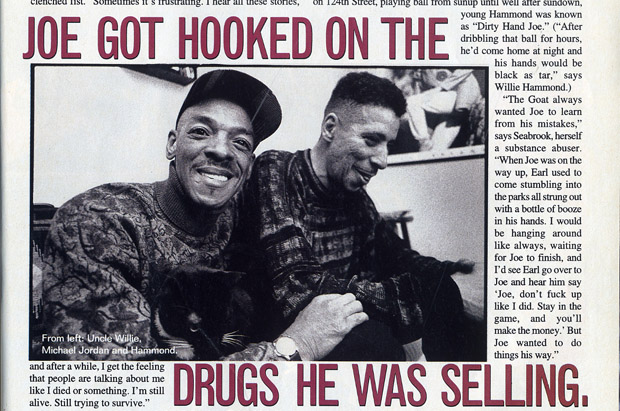 Across the street from the Polo Grounds Towers, the looming projects which stand where the New York Giants once roamed, a bent old man dressed in a brown baseball cap, a filthy turtleneck sweater and torn blue jeans hobbles onto the basketball court. Holding a garbage bag filled with video cassettes, he looks more like a beggar than a fallen basketball king returning to his asphalt throne.

“Yo chief, you blind or somethin’?” asks one of the angry players, sticking the basketball beneath his armpit and turning the palms of his hands up to the clear, brisk October sky. “We playin’ a game, man. Drag your sorry ass outta here!”

As the other players look on, the stranger, a tall, slender black man, light-skinned, with a short beard, heads for the sidelines and gently drops his garbage bag. But much to their surprise, he whirls the bag around and hobbles back onto the court. He looks to the empty bleachers and seems to draw strength from the memories of standing ovations and chants of ‘We want Joe, we want Joe.’  “I need some dollars,” he says softly. “Who wants to play me?”

“Yo motherfucker, stop wastin’ our time,” says one of the youngsters. “Go do your bummin’ somewhere else,” says another.

But the stranger, his tired eyes measuring the dimensions of the court the way a pool hustler measures the angles of his favorite table, breaks into a scam he’s been rehearsing for years before they were born.

“Don’t nobody here want to take my money,” he asks.

“Let’s see some money,” demands one of the young men.

“Losers show money ‘cause losers got to pay,” says the stranger.

“Your rock,” says the stranger, ripping the ball from the young man’s hands, palming it, waving it in his face as if he were trying to hypnotize him, and sticking it back in his chest. “Believe me little brother, I still have the home court advantage.”

“C’mon Rob, bust his ass says one of the young man’s friends.

“Yeah, c’mon Rob, show me something,” says the stranger. He leans in over the foul line and plays his man tightly. Now it’s his turn to flip his palms toward the sky, but not in anger. He’s simply playing good defense.

As the other players gather around the perimeter, the trash talking heats up, and the game begins. The young man, a lanky six-footer with a Jordan-era bald head and baggy shorts, fakes a jumper then explodes rightside toward the rim. He seems to have an easy layup, but just as he releases the ball, the stranger, with the same Afro he wore back in the days when he battled Julius Erving on this very court, gets a piece of it. The ball hits the side of the rim and pops back out. The stranger leaps high again to grab it along the right baseline and momentarily holds up. On offense for the first time, the stranger pushes his head forward as if he intends to drive for a layup, sending the young man off his feet and out of position. Free to shoot, the stranger glances at his opponent, smiles, and lets loose a soft 10-foot jumper that sees to hang cold air for two, maybe three generations before it finally falls through the cords.

As the game continues, the stranger begins to pull away. Reverse layup, baby hook, a two handed set shot, three straight jumpers from the foul line. “Who the fuck is this guy?” someone asks from courtside. Soon, its 12-0 and obvious to the young men that something is rotten in the state of West Harlem. Late in the game, the stranger leads 30-6, and needs just one basket to ice the contest. But as he pulls away for a game-ending jumper, a voice cries out from beyond the chain link fence.

“Yo, Joe Hammond, give that boy a break, man, don’t take his money.”

The young man calls time-out, realizes he’s been had by a ghost with a crossover dribble, drops his head and puts his hands over his knees.

“You’re Joe Hammond?” he asks. He puts his hand in his right sock and pulls out a crumpled $20 bill. “Here’s your money, man.” No disrespect.

From across the street comes a honk, and another voice cries out, “Yo, Joe, what’s up baby?” Hammond looks up and sees a Mike Kookoo in a black jeep, with Mingo Mason riding shotgun. “They used to come to the games when we were kids,” says Hammond. “I used to look out for them. Now they look out for me.” The two men rush to Hammond’s side. “You need a lift, Joe?” says Kookoo, with a smile.

In Harlem, and in many other neighborhoods in New York, the mention of Joe Hammond’s name, or even the sight of him lumbering across his old domain with a grbage bag slung over his shoulder instead of a duffel bag, still brings a smile to the face of anyone who saw him play in the 1970’s, back when he electrified crowds with soaring dunks, precision shooting and whopping scoring totals. Back when he made enough money selling dope and shooting dice to tell the Los Angeles Lakers to take their $50,000 rookie contract and shove itup their purple-and-gold-wrist bands.

“Those were the glory days,” says Hammond, walking over to pick up his garbage bag. “I had so much shit going my way, I thought it would all last forever. But here I am twenty years later, flat broke and selling bootleg video tapes on the street for a living. I blew my chance, man. I look back now, and I realize that I was just another knucklehead.”

At the age of 19, without ever having played a minute of high school or college basketball, Hammond , son of a New York City transit worker, born and raised in Harlem, had already achieved professional status with the Allentown Jets of the Eastern Basketball Association, and was touted by NBA scouts as a future star in their league. If you wanted to see the 6’4” guard do his thing on the basketball court, you traveled to Rucker Park on 156th Street and Eighth Avenue, where playground stars, college All-Americans and most pro players during the off-season played for some of the most theatrical basketball ever.

“In his day, Joe was on a par with guys like Dean Meminger and Tiny Archibald,” says Don Adams, the basketball coach at Taft High School in the Bronx, who was the only coach Hammond ever had at the amateur level. “And for his size, he was better than they were. Pound for pound, Joe Hammond was the greatest basketball player ever to come out of Harlem.”

Fathers still tell their sons about the Rucker League’s most famous game in 1970, when Hammond’s Milbank squad played against a team called the Westsiders. Milbank, a neighborhood team, was composed mainly of playground phenoms like Hammond, Pee Wee Kirkland, Eric Cobb (the Elevator Man), Joe Thomas and Jake Ford. The Westsiders, a group of professional players, were led by the Doctor himself, Julius Erving. Their roster sparkled with names like Charlie Scott, Billy Paultz, Mike Riordan and Brian Taylor.

On that day, thousands streamed into tiny Rucker Park for the highly anticipated showdown. Those who couldn’t get seats climbed the chain link fence surrounding the park, perched themselves on tree limbs or stood on the hoods of cars to get a glimpse of the action.

“It was mind-boggling, considering all the great players that were in that park,” says Peter Vecsey, now a basketball columnist for the New York Post and an NBC analyst, who coached the Westsiders. “Stuff like that, with pros and playground athletes competing in tournaments, would never happen today because teams have too much money invested in their players. It was a once in a lifetime thing, nothing like I’ve ever seen before.”