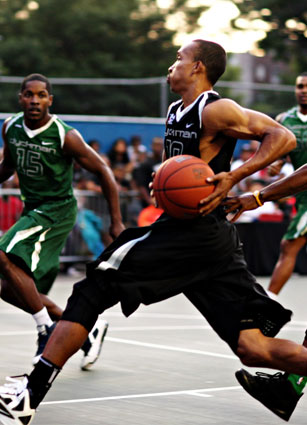 Entering the Dyckman Playoffs, Team NIKE had a lot to prove. A team criticized a few weeks ago for its unfair assembly of firepower and talent was now seen as overhyped and overrated. But that’s the nature of this business. When you represent the title sponsor in the most highly anticipated streetball tournament of the summer, past performance holds no weight. Just as in professional sports, there’s only one relevant question: What have you done for me lately?

In Team NIKE’s case, not anything they’d want to share. A heated loss to Ooh Way Records followed by a heartbreaking defeat to Michael Beasley and Team 914 left Team NIKE on a slippery slope. Would these losses ignite a catastrophic free-fall, or would Bingo and Co. use their recent failures as motivational fuel for a playoff turnaround?

If this past Wednesday was any indication, it’s safe to say the latter. In its first game of the Dyckman Playoffs, Team NIKE defeated and deleted the Rosedale Trailblazers, 80-62.

“It was a great win for us,” said Team NIKE head coach Bingo Cole. “We struggled in the first half a little bit, but then got it going and didn’t look back. We have no choice but to move forward from here, and we can’t wait to get back on the court.”

Team NIKE started strong, as Adris “Too Hard To Guard” DeLeon connected on an and-one layup to open to game. Al “Shep” Sheppard then followed with a layup of his own. With Team NIKE up 5-0, Coach Bingo enabled the full-court press. The Phil Jack of streetball was already aiming to force his opponent into submission, but as he soon realized, it’s not that easy.

Former UCONN guard Jerome Dyson (20 pts) sliced through NIKE’s defense, converting on back to back coast-to-coast layups, followed by an off-the-backboard alley-oop to teammate Kyle Hunt. With Dyckman on its feet, Rosedale was gaining momentum with a 16-8 lead. At that moment, Bingo knew he had a problem. His solution: feed the paint.

“We tried to get the guards going but that wasn’t working,” Cole said. “Then I said ‘screw it’ and just fed the ball to Vern, Quentin and Anthony. And it worked out.”

Coming out of halftime, The Boys In Black tightened up their pressure defense and executed a simple offense: pass into the paint and cut through. The beneficiary of it all: Al Shep.

Shep, who finished with a team high 16 points to go along with six rebounds, two steals, and one block, made his presence felt with perfectly timed cuts which turned into easy layups.

“It’s playoffs time,” Shep told NikeBasketball.com. “It’s time to turn it up on all levels.”

After Shep converted on three consecutive baskets to give his team a 53-43 lead with 14 minutes left, DeLeon made a trio of buckets himself, increasing the lead to 16.

After trading baskets down the final stretch, time was closing in on Rosedale and it was clear Bingo and Co. would live to see another day. With under a minute left, a one-handed hammering dunk from Vern off an alley-oop from Kee Kee put Team NIKE up 80-62, and the refs called it from there. This was a win Team NIKE absolutely had to get, for both the obvious reason of advancing to the second round and also to get back on track in hopes of accomplishing their one and only goal: winning the Dyckman Championship.

“I know we’re gonna win it,” Cole said. “I can just feel our intensity and desperation right now. If we play together, we’ll bring home the trophy.”

Catch Team NIKE in the second round of the Dyckman Playoffs tonight against 914 at 7 p.m.