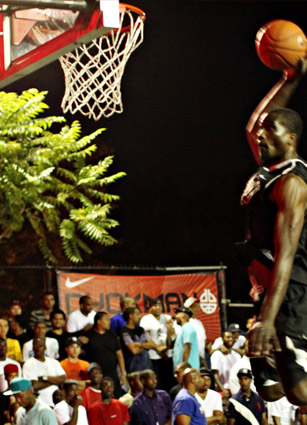 When you’re a powerhouse team, complacency is inevitable; at some point, guys are going to ease up. If word of an inferior opponent surfaces, your squad may take its foot off the pedal and enable cruise control. It’s normal, it’s expected, but it’s a critical mistake.

After watching Team NIKE sweep veteran United Brooklyn and defending champions Takes No Prisoners, the Boys in Black eased up for their showdown with a youthful but polished JTA team. In its closest game thus far, Team NIKE defeated JTA 62-54 at a packed Dyckman Park this past Wednesday.

“The win was certainly tough,” said Team NIKE head coach Bingo Cole. “We kind of slept on JTA. The guys thought it was going to be a ‘coast game’, but there’s no such thing. Our team now realizes anyone can beat us if we don’t show up.”

JTA came out of the gate firing on all cylinders. It was a collective effort, but the strong start was undoubtedly ignited in the paint by Alvin Moufous, a hard-nosed banger who attacked the rim with no remorse. After Vernon ‘Vern’ Goodridge slammed home a two-handed dunk to start the game, Moufous responded immediately with a dunk of his own. He finished with 11 points, seven rebounds, two steals, two blocks, and two assists.

“Alvin was tough draw in the beginning,” said Anthony ‘I Robot’ Glover. “He got a lot of rebounds and kind of set a tone.”

To counter Moufous, Coach Bingo resorted to all of his assets, using Glover, Vern, and B.J. ‘The Beast’ McFarland to gradually wear down the one-man-show.

“We just played physical with him,” Glover sad. “We wanted to stop him from getting to the rim. We had three big bodies, and a lot of fouls to use. We’re replaceable, so we just used our fouls and kind of took him out of his zone.”

“We have weapons,” Bingo added. “Vern is like 6-9 shot blocker and defender, and alters shots to change the game. I Robot is strong down there, and nobody is gonna move him. And The Beast, is, well a beast.”

In addition to Moufous, JTA had former UCONN guard Craig Austrie, who contributed with 15 points. But as usual, no guard at Dyckman was more effective than Adris ‘Too Hard To Guard’ DeLeon. DeLeon was quiet in the first half with zero points, and it showed as Team NIKE went into the break with a narrow 31-30 lead.

“I knew I had to be more effective in the second half,” DeLeon said. “My teammates had the confidence to keep feeding me, and I wanted to deliver.”

And deliver he did. DeLeon finished with 12 points, three assists, three rebounds, and two steals, and set the tempo in the second half.

“Austrie is a good player,” DeLeon said. “He did his thing in the first half, but I knew I had to come back with something in the second half. My number got called and I came through, it’s that simple. If my team needs me, I’m gonna be there.”

DeLeon and Quinton ‘T2’ Hosley (14 points, six rebounds) made crucial plays down the stretch to help Team NIKE stay undefeated. DeLeon’s crossover and Hosley’s inside-outside threat left JTA in a flux. If they converged on the guards, the big-men would take advantage. If they laid off, Team NIKE would be too hard to guard. Literally.

Keydren ‘Kee Kee’ Clark (five points) put the game away with a pro-level crossover move to the basket, finishing over two JTA defenders.

“Any given night anyone can be our leading scorer,” Bingo said. “Our guys just want to win the game. We’re not worried about scoring, just winning.”

“I would probably bring in heavy hitters too,” Bingo said in regards to the rule. “And I’m expecting that to happen down the line. We just have to play the best basketball we can play for ourselves. We need to stay as a team, and I think we will.”

Catch Team NIKE in its fourth game against Mann Up this Wednesday at 8 p.m. at Dyckman Park on 204 & Nagle.