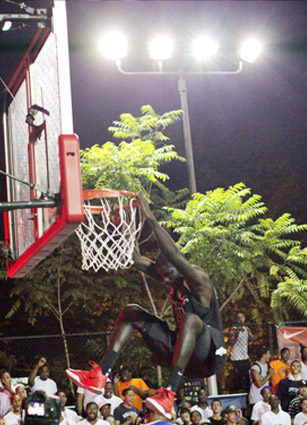 In its fourth game of the Dyckman season, powerhouse Team NIKE sent another message to the rest of the city, this time defeating Mann Up, 89-64. The super-squad [literally] imposed its will, forcing Mann Up to throw in the towel as the lead was getting out of hand.

With more than two minutes left on the clock and Team NIKE well ahead, Anthony ‘Africa’ Pimble caught an alley-oop from Keydren ‘Kee Kee’ Clark and jammed it over an unaware defender. The fans at Dyckman immediately flooded the court and Mann Up was forced to call a time-out they would never return from, as they elected to end the game, tapping out in a 25-point submission.

“This was a great win for our team,” said Team NIKE head coach Bingo Cole. “Last week we kind of slept on JTA, and we almost got beat. This week we showed that we can’t take any games for granted, no matter who our opponent is.”

‘Kee Kee’ Clark led the way for Team NIKE, finishing with a game-high 24 points to go along with 5 assists and 3 steals. From the onset, the 5-9 Harlem native (Rice HS) went to work, weaving his way smoothly through traffic for crafty layups and nailing several pull-up 3-pointers. Clark’s performance reinforces what Coach Bingo has stressed since the squad’s inception: on any given night, any Team NIKE player can take over a game and steal the show.

“It felt good for our team to click on all cylinders and get this win,” Clark said. “It was good to get back and find my groove with my teammates. It just shows how deep this team is. We have so many guys that are capable of going off on any given night, at any given moment.”

“We’re a very unselfish team,” Cole added. “Every time we play it will be someone’s night. Tonight it was Kee Kee and Shep’s time to shine. They were unstoppable.”

As Cole alluded to, Al ‘Shep’ Sheppard made a strong contribution, scoring 17 points and grabbing 7 rebounds. The 6-6 wing was a mismatch for the opposition, as he jetted past Mann Up’s forwards and backed down their smaller guards.

“One thing about Team NIKE is that if someone is hot, they will give him the ball,” Cole said. “These guys are evolving from teammates to brothers.”

“Our big guys are used to playing against Kelly,” Cole said. “He plays summer ball all year, so everybody knows how to guard him. He’s a tough matchup, but you gotta force him to the right and get him frustrated.”

Off to a sizzling start, Cole is confident his team will continue their strong play. His strategy from here on is to keep the game simple and avoid unnecessary adjustments.

“Right now, I’m just letting the guys play,” Cole said. “If we hit a bump in the road, we’ll fix it. These guys are playing together everyday, so I think we’re only going to improve.”

The next two weeks will help mold Team NIKE’s legacy at Dyckman. Next up is a hungry R2K team led by former Tennessee center Brian Williams. And in two weeks, Dyckman will welcome a stacked Ohh Way team (Corey ‘Homicide’ Williams, Ron Artest, Dwight Hardy, Jeremy Hazell, etc) in what is expected to be the biggest streetball game of the summer.

Despite the tough schedule ahead, Coach Bingo is confident his army of 10 can get the job done.

“We’re not gonna bring in any NBA players or stuff like that,” Cole said. “Our guys already told me that they want to face the challenge. They’re on this team for a reason, and it’s time to prove they were the right selections.”