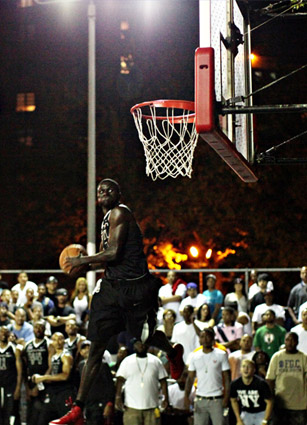 At this point, it’s routine. Pregame motivation fueled by unwarranted trash talk, suffocating defense in the first 10 minutes, isolations, pick n’ rolls and fast breaks to stretch the lead, and a banger by Africa to put the nail in the coffin. Literally.

In its fifth game of the Dyckman season, Team NIKE improved to 5-0, dismantling Rodney Park 90-46.

Adris ‘Too Hard To Guard’ DeLeon ignited the rout by scoring on the first play of the game and then locking up on defense. Team NIKE put its clamps on, recording 10 steals in the first 20 minutes en route to a 59-17 halftime lead.

“It felt like they had 10 guys out there at once,” streetball legend and Rodney Park member Kareem Reid told NikeBasketball.com. “They’ve become a dangerous team. They cover a lot of ground quickly, and it feels like they get a hand on every pass.”

At this point, Team NIKE’s depth has overwhelmed all of its opponents. As the game got out of hand with a series that went something like dunk-layup-dunk-dunk-three for Team NIKE, Anthony ‘Africa’ Pimble put the icing on the cake, with a windmill slam that once again brought the crowd to the court and the opposition to submission.

“Our chemistry was great tonight,” DeLeon said. “We were focused and played together. Hopefully we keep this up next week.”

Next week can’t come soon enough. In the most highly anticipated streetball game in recent memory, Team NIKE will take on the ‘other’ powerhouse, Ooh Way (pictured below).

Ron ‘Metta World Peace’ Artest. Corey ‘Homicide’ Williams. Dwight Hardy. Jeremy Hazell. And anyone else they decide to suit up, as permitted by the open roster rule.

The Drew League in L.A. has been dope, and the D.C. Goodman League is cute, but no streetball tournament in existence rivals the passion and intensity of Dyckman. Not to quote LeBron, but this stuff is more than a game.

It will undoubtedly be Team NIKE’s biggest challenge to date, and the fans will be rooting for an upset. But despite all the external pressure and chatter, DeLeon and Coach Bingo are confident in their team’s ability.

“Ooh Way is going to be tough, but I think we’ll be able to pull it out,” DeLeon said.

“We have the biggest game in New York City next week,” Bingo added. “Right now, I’d say 90% of the people think Team NIKE’s going to lose next week. But I think we’re gonna shock the City.”

But it works both ways.

I had clear vision of Team NIKE brutally murdering Rodney Park, sitting alongside former St. John’s point guard and Big East Player of the Year candidate Dwight Hardy. To say the least, Hardy was confident that his Ooh Way team will beat Team NIKE. Ooh Way has an ocean of experience, and has matched up well against Team NIKE’s roster individually. Can they match up as a team? We’ll find out in a few days.

“We’re so motivated it’s crazy,” Bingo said. “I appreciate all the haters out there. My guys are motivated now, so it just makes my job that much easier.”