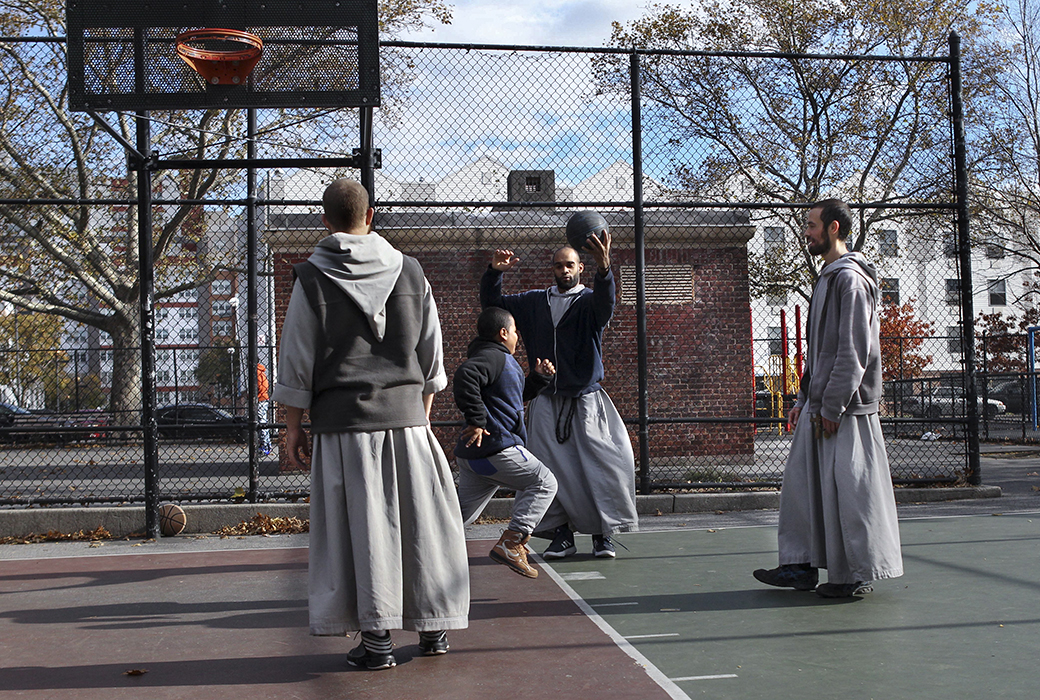 From a distance, the cadence and rhythm sound like any other open gym run. Kanye West’s “Follow God” is pumping over the portable speaker, rubber soles are skidding on the hardwood surface and casual basketball directives—“Get back, get back. I got ball!”—reverberate off the stark cement walls.

But this is not your typical open gym run. The song and setting have deeper meaning here. When you step inside the double-red doors of the St. Francis Youth Center, a recreation hub carved out of the old St. Adalbert’s Parochial School in the Melrose section of The Bronx, hoops and holiness converge.

Beyond the statue of Jesus at the gym’s entrance and up a short flight of stairs, three Franciscan Friars of the Renewal, fitted in ash-gray religious habits and sandals, are chopping it up with a group of 20-somethings getting ready to play pick-up. They joke, they banter, they compare early NBA MVP candidates.

To an outsider, it makes for a unique dynamic and display. A group of Friars and locals, from different walks of life, bonding through basketball. To those in the circle, the open gyms are tried and true, a well-worn tradition of 33 years and running.

It all started back in 1987, with $800 and the approval from Cardinal John O’Connor, then Archbishop of New York. The Friars set up shop in a neglected Polish parish on East 156th Street and Melrose Avenue. Their mission was simple: to serve and live alongside the poor by establishing homeless shelters, soup kitchens and community programs. Their method, however, was hard: To accomplish all of this, while meeting their own needs, through begging.

And this was the South Bronx of the ’80s, a different era with a different level of urgency.

“They called it Fort Apache back then. People selling drugs on the streets, gunshots all the time. Empty parking lots, burned-out buildings, burned-out cars. It was rough,” says Fr. Mark-Mary Ames, a point guard-turned-priest from Orange County, CA, and Friar since 2009, who oversees the open gyms today.

Ever the facilitator, Fr. Mark-Mary sees the game as an organic way to engage with the community, both then and now.

“Basketball from the very beginning was common ground. It was a bridge, and it was a way for us to connect as monks… guys from one background living and serving a community where we didn’t grow up.”

More than a platform to evangelize, the St. Francis Youth Center is a refuge from the temptations and dangers of the streets, including increased gang activity, and drug and substance abuse that plague the neighborhood. For those who participate in the run, it’s a blessing and brotherhood.

“I’ve been coming here for 20 years,” says Celso Gotay, a lifelong Melrose native. “This program is big for the community. It’s a family. We hang together, battle together, have fun together. The Friars pour themselves into their work, they teach us about the faith and are always there for us. This program has kept me off the streets and out of trouble.”

Francis Lino, a pharmacist technician and unapologetic Kobe Bryant fan, has been involved with the youth center and open gym initiative since he was 7 years old and credits the Friars with reinforcing his faith.

“I did all of the after-school programs. The church part of the program as well,” Lino tells SLAM. “It’s been great. Life is similar to the game of basketball. It’s always changing. You have to make adjustments. You’ve got to learn from it, grow from it. When you don’t have the strength to go through it, you have God.”

For the Friars, that’s all they have and all they need. All by choice. This is their vocation. It’s a lifestyle of sacrificial service; they live and serve together as brothers of one family.

“I’m so convinced of the value of playing a team sport and taking on a team identity,” Fr. Mark-Mary continues. “Even in the spiritual life. It’s not just me and the goal, but it’s us and our success. It’s always communal. Becoming a Friar, becoming consecrated to God, is like taking a charge, diving for a loose ball, or guarding the guy nobody else wants to guard. It’s sacrificing yourself and dedicating yourself so that the whole team wins. And yeah, I love it.”

“A lot of our ministry involves personal encounters. It’s about getting to know the person in front of you, restoring whatever their physical and spiritual needs are. But that requires teamwork and making a connection. Basketball makes that initial connection easier and more real.”