It doesn’t bother Cam Reddish. Not at all, really.

He doesn’t seek the attention or crave the spotlight. He doesn’t need your approval or recognition. He isn’t concerned with highlights or headlines. He doesn’t do it for that.

You can sleep on him if you want—that’s OK. And if your focus is mainly on his Duke teammates—that’s alright, too.

It won’t bother Cam Reddish. And it certainly won’t change him.

“I’m just going to continue to be me,” the 6-8 forward, who’s projected as a top pick in the 2019 NBA Draft, tells us. It’s mid-February and practice at Cameron Indoor Stadium has just wrapped up. Reddish is sitting in the media room right off the iconic court, reflecting on his journey and pondering what the future holds.

When Cam’s freshman season at Duke began a few months ago, something was off. He’ll admit that he wasn’t eating well or taking good enough care of his body. He constantly felt weak and tired. He was getting sick a lot.

“It was just a lot of stuff people don’t necessarily know about,” Reddish says, adding that it was impacting his confidence and performance on the floor. “I was going through it and I was fed up.”

He had to get back to him.

That process began, as always, with family—his parents, Zanthia and Robert, and younger brother Aaron. Their support has helped him through similar battles in the past and motivates him on a daily basis.

His dad played two seasons at Virginia Commonwealth University from 1989-91 and passed on his passion for the game to Cam. He and Zanthia have traveled everywhere basketball has taken their son—all across the United States and overseas to places like Egypt with Team USA. They’ve been a part of every step of his path to Durham, NC.

“I couldn’t ask for better parents,” Cam says. The minute adversity hits, he knows that he can turn to them.

Reddish’s difficult college transition also led to a strengthening of his faith. He started praying more and continues to listen to a preacher prior to games. He concentrated on his development and maturity outside of basketball.

“Just growing up, really,” he explains. “Trying to become more of a man and take care of myself.”

And of course, he got in the gym. That’s where Reddish feels most at home. He apparently tripled-down on the amount of time he was pouring into his craft, zeroing in on his defense specifically. That, to Cam, is the next evolution of his skill set.

Reddish smiles when asked about the work he’s put in since joining the Blue Devils, as if to suggest: You wouldn’t believe me if I told you.

“When you get to know people, you understand what their medication is or what their language is,” says Steve Tulleners. He’s an assistant coach and the associate director of admissions at Westtown, where Cam attended high school, and has served as a mentor for the last five years. “For Cam, a way that he can clear the static in his mind is to get in the gym.”

“When I call him, nine times out of 10 he’s headed to the gym or just leaving the gym,” adds his mom, Zanthia. “When I talk with his assistant coach [at Duke], he’ll tell me, Yeah, we get in the gym early every day before we have practice.”

Basketball, faith and family—it was these factors that steered Cam back to himself. He’s a quiet, soft-spoken 19-year-old, at least until he fully opens up to you. He enjoys video games (2K right now, because he’s trying to boost his MyPlayer) and chilling with teammates. His music rotation varies depending on the day, but he’s big on Playboi Carti and Gunna.

The truth is, though, Cam just loves to hoop. Everything else—the hobbies, the MyPlayer, the social media apps, the hype that naturally engulfs his team—it’s all secondary. He is passionate about the game to an extreme. He wrote in a piece for The Players’ Tribune that basketball isn’t simply a thing he does, it’s his “heartbeat.” And that’s been the case since the very, very beginning.

“Literally since he was an infant,” Zanthia says. “Basketball has always been his everything.

The obsession only intensified as he got older and started to dream of reaching the NBA.

“I’d say 97 percent of the days that we were in school, that ball, at 6 in the morning, was bouncing,” recalls Tulleners, who would hear Reddish enter the Westtown gym early.

“We’ve been blessed to have some kids come through our program,” Tulleners adds, “[but] not one kid, before or after, has even touched that type of extra effort, that extra work.”

Reddish was in there by himself most mornings, and no one compelled him to be. In fact, several did the exact opposite. Cam would have a test coming up and advisors would urge him to sleep more, saying he would not be allowed to work out if he didn’t get his eight hours in bed.

“When it comes to basketball, he loves it so much that I don’t know if it’s work for him,” says Zanthia. “It’s just something that he enjoys doing. [What’s] unique to him is that he really enjoys the process. Some people want to be in the game and [enjoy] all of the stuff that happens when the lights are on. But Cameron enjoys being in the gym, working on his craft, seeing himself improve, pushing himself.”

That genuine commitment has brought about a number of accolades. Reddish was named Mr. Basketball in Pennsylvania and a McDonald’s All-American his senior season. He averaged 23.8 points and 7.6 rebounds on the Nike EYBL circuit and finished ranked No. 3 in the Class of 2018 by ESPN. He committed to go to Duke along with the No. 1 and No. 2 recruits, RJ Barrett and Zion Williamson, as well as a top 20 player in Tre Jones.

His style is best described as smooth. The quick jab-steps, the long strides to the rim, the pull-up threes from way beyond the arc—everything looks effortless. He has the versatility to guard nearly every position on the floor and is a natural scorer from all three levels, which makes him such an exciting NBA prospect. Though he frequently plays off-ball at Duke, allowing Barrett, Williamson and Jones to set up the offense, he was mostly a PG until this point in his career.

“I think I’m just an overall pretty good playmaker,” he says. “That’s my main strength. With or without the ball, just making plays.

“I don’t think I need the ball too much to be effective. But at the same time, I do like having the ball in my hands.”

It’s true, Cam has made a real impression with far fewer touches than he’s accustomed to. As of this writing, he’s averaging 14.3 points and has dropped 20 or more on eight different occasions. He’s come up huge in the clutch over the course of the season—the highlight being a game-winning three against No. 13 Florida State back in January. Still, on a roster with two others touted as top future pros—Barrett and Williamson—Reddish has occasionally gone overlooked. For the most part, he’s been the third option on the Blue Devils, which has contributed, along with his reserved personality, to claims that he’s too passive. Tulleners believes it to be an unfair characterization.

“Short of his parents, I’ve probably watched the most Cam Reddish basketball of anybody on the planet these last five years,” Tulleners says. “His basketball IQ is so high that he often knows where the ball should go and what pass to make and when to pick and choose his spots, and that’s been misconstrued as a passive demeanor as opposed to being comfortable with who he is.

“[His greatest strength] is his ability to understand when and where to impose his will on a game.”

Take Duke’s improbable comeback against Louisville as an example. With his team trailing by 23 in the second half, Reddish hit four threes in the final 10 minutes, including the game-tying shot and the game-winning free throws. He can take over, but he doesn’t always have to. Sometimes his role on such a gifted squad is to facilitate, space the floor and knock down the open jumpers as they come.

Through it all, the criticism and lack of limelight could not be less of a worry to Cam. In many ways, it’s actually a blessing. He doesn’t want to have to deal with that. It’s not where his comfort lies and ultimately serves as a distraction. He came to Duke in the first place because it provided, in his mind, the greatest opportunity to progress as a basketball player. That’s his focus.

“I’ve been challenged every day in different aspects,” he says. “I’m playing against the best players in the country, and obviously the coaches are pushing me to be the best every single day.”

There have been numerous instances during his life, including the onset of his Duke career, when Reddish wasn’t feeling himself. Like most teenagers, especially those under intense pressure to live up to high expectations, he’s been down and discouraged at times. His parents have repeatedly offered the same piece of advice amid those struggles, something Cam carries with him everywhere.

“To never stop,” he says. “They just told me to never give up. I’ll never forget that.”

More obstacles will arise and more doubters will emerge. The journey will have ups and downs and often shift course rapidly. But as long as Cam stays true to who he is and what he’s passionate about, then he knows he’ll be fine.

“I know what I’m capable of doing,” he says. “I don’t need people’s validation or anything like that.”

And whether you’re watching or not, one thing is certain. 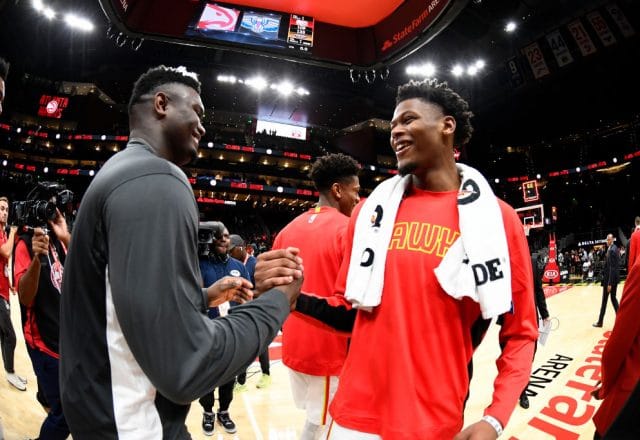 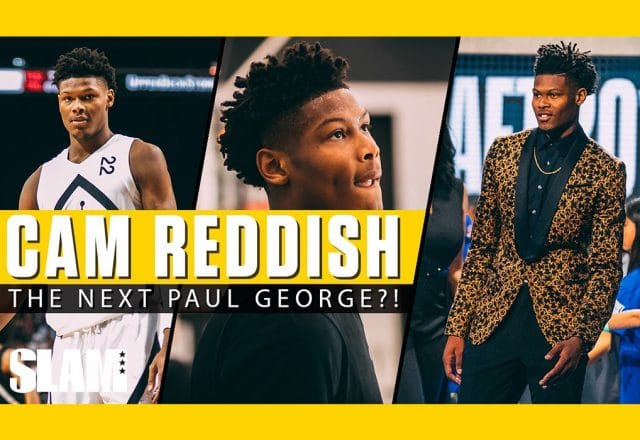 Is Cam Reddish the Next Paul George? 🧐 Hawks Got a STEAL! 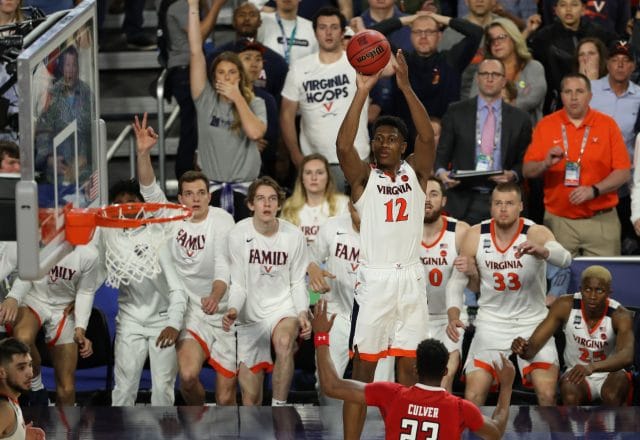 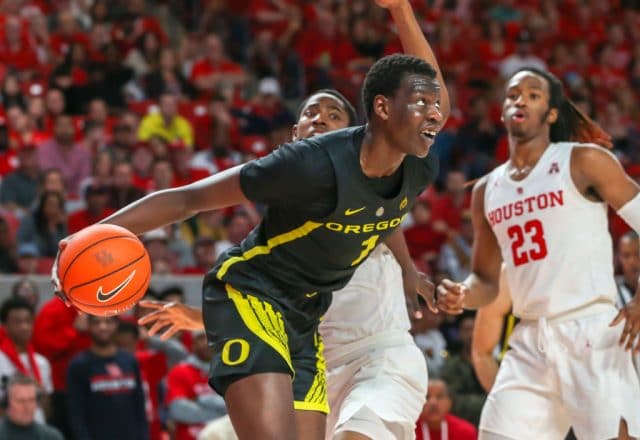 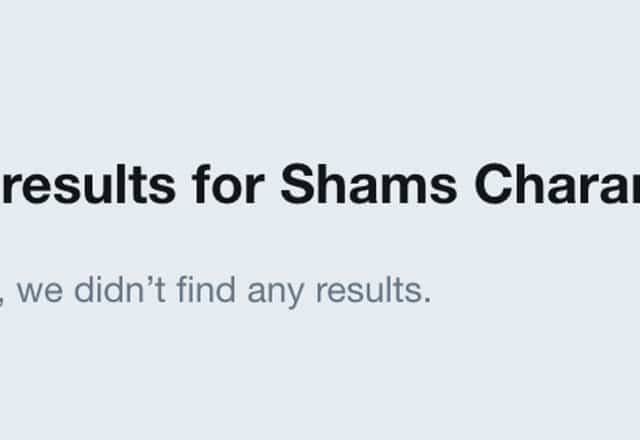