THE JOURNEY: Jonathan Kuminga Is Living Out His Hoop Dreams 🙏🏽 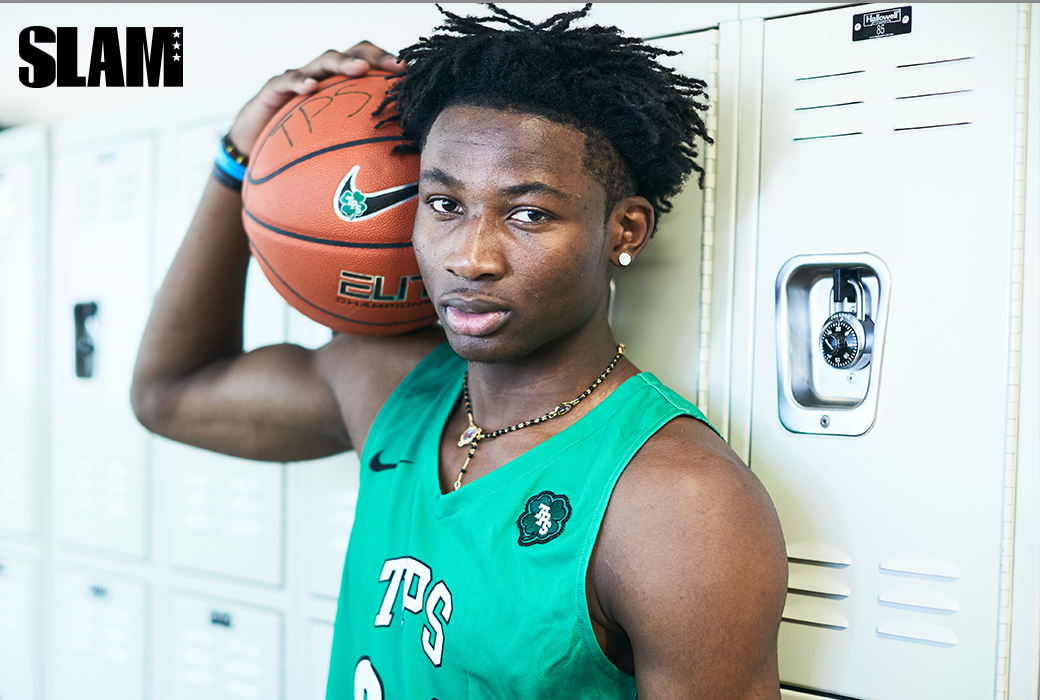 Sitting in an empty gymnasium on a Wednesday afternoon in late September, Jonathan Kuminga is catching his breath after participating in a series of scrimmages as part of The Patrick School’s open gym fall sessions.

The school’s walls depict the rich history of its basketball program, which dates back to when it was located in Elizabeth, New Jersey, under the St. Patrick High School label. Kyrie Irving, Michael Kidd-Gilchrist, Al Harrington and Samuel Dalembert are among the NBA players who came out of there over the years. But in 2012, amid an ongoing battle with declining enrollment, the school shut down all operations. The following fall, a group of faculty came together to reopen the institution as an independent program known today as The Patrick School, which now operates out of Hillside, NJ.

Kuminga, sitting at half court and looking around at all the retired jerseys hanging above the gym’s large windows, reminisces on his journey, which has taken him from the Democratic Republic of the Congo to West Virginia to Long Island, NY, and now to the Garden State in a matter of just three years. It’s a path that has allowed him to truly experience both ends of the spectrum when it comes to access to resources.

“First of all, there is no money. There is no food,” says Kuminga of life back home in the Congo. “When I started playing, we used to walk far away to find [a court]. There aren’t gyms all over like you see here. [Here], you walk down two blocks and you find a gym, a park. You gotta walk like 45 minutes to get to wherever you gotta go to play [back home]. And then after that, you gotta make sure you get back home on time because [there’s] so much stuff out there. You might even find some people that are just going to see you on the road and stab you, try to kill you. It’s kind of dangerous.

“It [helped] me because I’m doing that walk every day. Even my team back home, I was the young kid on the team—they started taking me to every trip because they liked that I was motivated to do that walk to come play.”

Basketball is deep-rooted in his family’s history. His parents hooped. His cousin, Emmanuel Mudiay, plays for the Utah Jazz. His other cousin, Omari Gudul, currently plays professionally in Romania for SCMU Craiova after having also played in France, Spain and Bulgaria. His older brother plays at Texas Tech after transferring from UNLV last spring.

Kuminga says that he’s had a basketball around him ever since he could remember. He hooped for a local team back home. Eventually, it became clear that not only did he have a passion for it, but also had the skills to make something out of it. He was told that he needed to go play in the United States in order for him to reach his full potential. And so, at the tender age of 13, Kuminga boarded a U.S.-bound plane to follow his dreams—even though that meant having to be thousands of miles away from his family.

“That decision wasn’t that hard because when I used to play back home, our team used to go all over but not out [to other countries],” recalls the 6-8 forward. “We used to go around the country, so leaving my parents wasn’t that hard. The last day I heard I was going to come over, I made that decision. I was like, I gotta man up. I gotta grow up. I’m going to see them one day, so I just gotta come over and continue to reach my goal.”

After arriving in the States and playing at Huntington Prep (WV) as a freshman, the five-star recruit began to draw the attention of scouts and college coaches. He transferred to Our Savior New American in Centerreach, NY, for his sophomore year and averaged 25 points, 5 rebounds and 5 assists, including an event-record 40-point performance at the Slam Dunk to the Beach showcase. He was ultimately named the MaxPreps National Sophomore of the Year, and after a strong showing in the Nike EYBL circuit this past summer, he is now rated as the No. 1 junior in America on ESPN’s rankings.

“Back home they see me all over. It’s a big thing. They’re all happy for me. Everybody is super hyped, posting me all the time. That motivates me, too,” says Kuminga. “When I left home, I told my mom I was going to be number one in everything I do. I worked hard. That’s how I got to this point.”