ALL 👀 ON ME: Mikey Williams Is Coming for the League

If you saw Mikey Williams hooping under the sun on a San Diego blacktop, you may not recognize him. He’s tall for his age at 6-3, but his height isn’t necessarily off the charts. Like most of the kids in his neighborhood playing outside, he uses the court as an oasis to kick back and enjoy the game at its purest form. He laughs, talks trash and hollers at friends passing through.

A year ago, Williams was just another SoCal hooper on the rise.

Things changed when he joined the North Coast Blue Chips and played alongside Bronny James. Cameras flooded the baseline for his first game at the Charlotte Convention Center in North Carolina; seconds into warm-ups, Williams threw down an East Bay dunk.

“Who’s this kid?” was the unanimous response from the sold-out crowd.

It took less than a day for Mikey Williams, who was three weeks removed from his 14th birthday, to become a household name. He received life and basketball advice from LeBron James and had Quavo pull up to sit courtside at one of his games the following week.

As the buckets poured in, so did Williams’ following—he currently has 750,000 followers on Instagram and more YouTube searches than several of the top seniors in the country.

For a 14-year-old who has spent most of his life homeschooled, the blast to prominence was relatively uncharted territory.

“I don’t even go to the mall no more,” he says, noting that picture requests are often overwhelming. “Sometimes I just want to chill.”

When he is out, though, he never turns down fans who ask for a photo opportunity—it was a vow he made two summers ago after seeing an eventual NBA lottery pick turn away fans at EYBL Peach Jam.

A mixture of nature and nurture pushed Williams to the point he’s at today.

The competitive, dawg-like demeanor he carries on the court is one his mother, Charisse, and life-long coach, Terry Tucker, have seen in him since the beginning.

“Mikey’s competitive. He doesn’t like to lose,” Tucker says. “He was like that as a baby. If he didn’t have the ball, he’d go get it.”

As Williams grew into his elementary years, it was clear he had a fearless fire.

“He was getting into fights almost every single day,” Charisse says. “Usually, though, it was against the bigger, older kids—he’d stick up for the kids getting bullied.”

“When I was in first grade, I was beating up fourth graders,” he adds with a wide grin.

When he was pulled out of school, his parents, both athletes themselves—Charisse won a California Interscholastic Federation softball championship and his father, Mahlon, was a hometown hero while hooping at Sweetwater High School—pushed him to basketball to channel that energy.

Williams’ introduction to hoops was an outdoor court at the apartment complex he grew up in. There, it was a necessity to keep your head on a swivel: a “Beware of Rattlesnakes” sign sits behind one of the backboards and Williams said he’s seen bobcats from the court, too.

“I don’t know if playing outside made me a better player,” he says, “but it definitely made me a tougher one.”

Over time, the raw athleticism and grit he developed playing outside evolved. Nowadays, the gym at San Ysidro High School—the school he’ll make his debut for in June during the new NCAA live period—is where he’s seen his game move to an elite level.

Despite recovering from a minor knee injury, Williams has been working out three times per day.

“Some people think the gym is punishment,” he says. “Being in the gym is the best thing ever— it’s my version of having fun.

“This beautiful place is my home,” he adds while gesturing to the banners hanging on the wall. “My house is my second home.”

His work on the hardwood is serious business—his intensity level is always on full tilt.

Williams doesn’t go to the gym because there’s nothing else to do—his Instagram direct message inbox is never empty, and there’s plenty of invites to go out with followers who want a slice of the clout that comes with being associated with a high-level hooper. 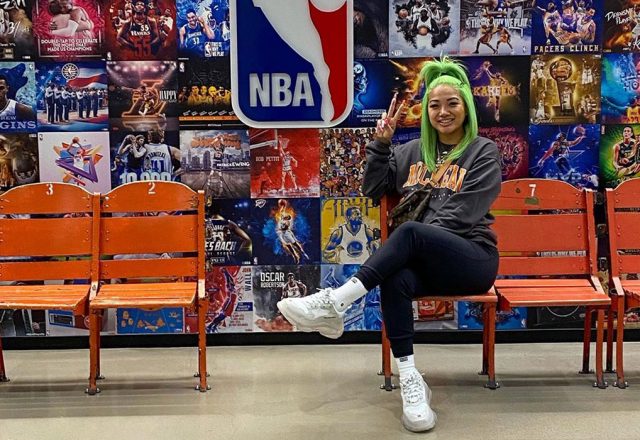