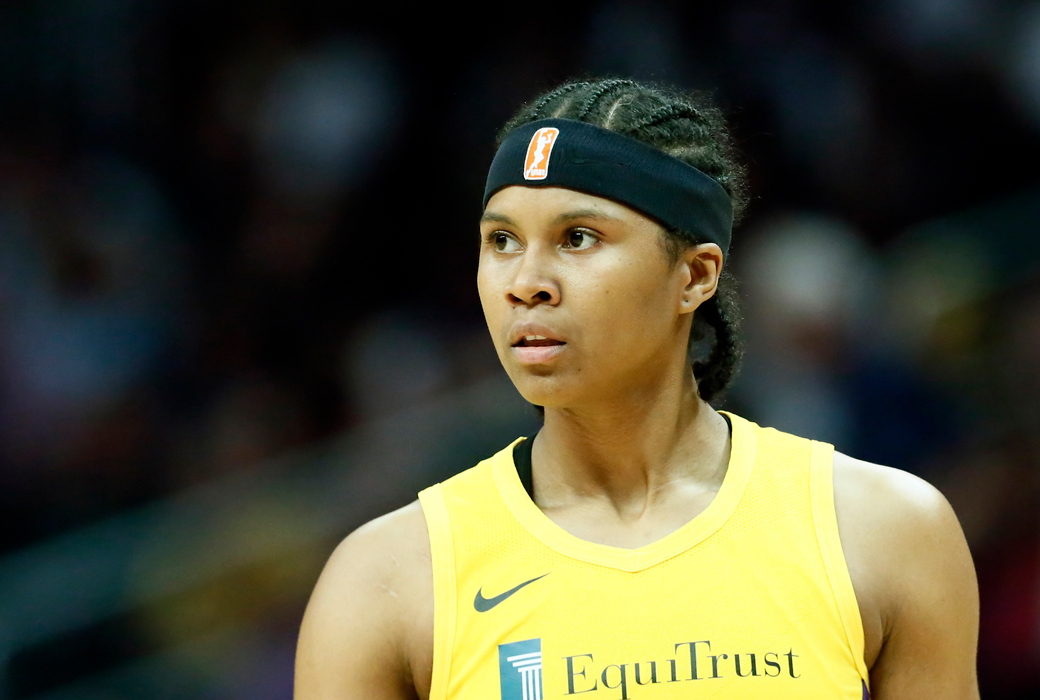 It was the middle of the night when I found out. The day before, we were celebrating at my family’s house. It was a nice, sunny day on the 21st of May.

I had just moved into my apartment with the Mystics. My cousin’s girlfriend lived right around the corner from where the apartment was. So that night before we left, he was supposed to ride with us. And he ended up staying in Alexandria. He was like, “Y’all can just go ahead. I’m going to stay in Alexandria tonight.”

So nobody really knew where I lived except my cousin’s girlfriend. She showed my family the way to my apartment. My younger sister had called me, like, “What apartment number do you live in?”

I was frozen for a minute. And was in shock. Then I just was super angry.

It lasted a good minute. Maybe a couple of hours where I was just pacing back and forth in the hallway. Once my family left and I was still at the apartment, they had called one of my teammates to stay with me for a little bit. Then it actually hit me. I got real sad after that.

Ju and I started playing together when we were 6. He went out and was playing for a little rec league team. I was just excited to go play. It was an all-boys team, all-boys league, so I went and played with him. He was a ball hog. He wanted to shoot every shot. I was the get-the-rebound player because he was smaller than me growing up. I was always the bigger one until we got to maybe eighth or ninth grade, then he sprouted a little bit. He could pass it a little bit, but it was rare that he would pass it. He thought he was Allen Iverson. We watched basketball all the time, but he just loved AI.

Growing up, for us, because of where we lived, it was super close-knit in our area. A lot of Black people. We just started to really see the police brutality side—police bothering my older cousins, making threats. It was early on, when we started getting into our early teenage years, when we started to witness it.

And then eventually, the neighborhood started to change. There were more and more white people coming into the neighborhood. So they didn’t really know us like that. We were kids. We’ve always been that way, playing in the street. We played football in the street, we played tag around the neighborhood. And the people who were there while we were growing up, they didn’t have a problem with it. But when the new people started moving in, they wanted to call the police and say the music’s too loud. That type of stuff.

We just learned to stay out of the way. We grew up playing basketball. That’s what kept us out of the streets. As long as you were an athlete, they kind of knew who you were so you were OK. But if you weren’t, that’s when you were in trouble. When you were out there and they didn’t see you as an athlete or somebody who they could look to in the community, that’s when things changed for you.

All these places were rivals in Alexandria. Like, what was the best area in the city? So my cousin, he was that one person that could go to any place and be OK. He was an athlete—he played basketball in high school but not all the way through. So when that happened, everybody in the city came together just because he was one of those people that had that type of energy where everybody loved him. The whole city came together and supported us and made sure we felt like everybody was with us throughout the whole process from when he got killed.

That next day, we had the whole street where we grew up blocked off. Because he got killed two or three doors down from where we grew up, from where my mom’s house was, everybody was right there in that area for hours. Every day you came out there, there were people standing out there on that corner where he got killed. Balloons, teddybears, all types of stuff. And even when it came to getting the cop arrested, everybody was doing their part, speaking out during that time. [The officer, Craig Patterson, was convicted and sentenced to six years in prison for the murder of Julian Dawkins.—Ed.]

You can’t fight a battle like that by yourself. If it’s just your family, it’s going to be a lot harder than if the whole community is backing you. Or a whole state. Or a whole country. If you’ve got more than just you fighting it, you’ve got a better chance of succeeding.

As long as you’re doing something, you may not have a big platform, but if you’re speaking and talking to people about it, and you’re trying to do something to move the needle and make some change, just keep doing it. Your platform doesn’t have to be great. You could touch one more person. That one person touches another two people. As long as you’re touching somebody to try to create change, you’ve just got to keep doing what you’re doing.