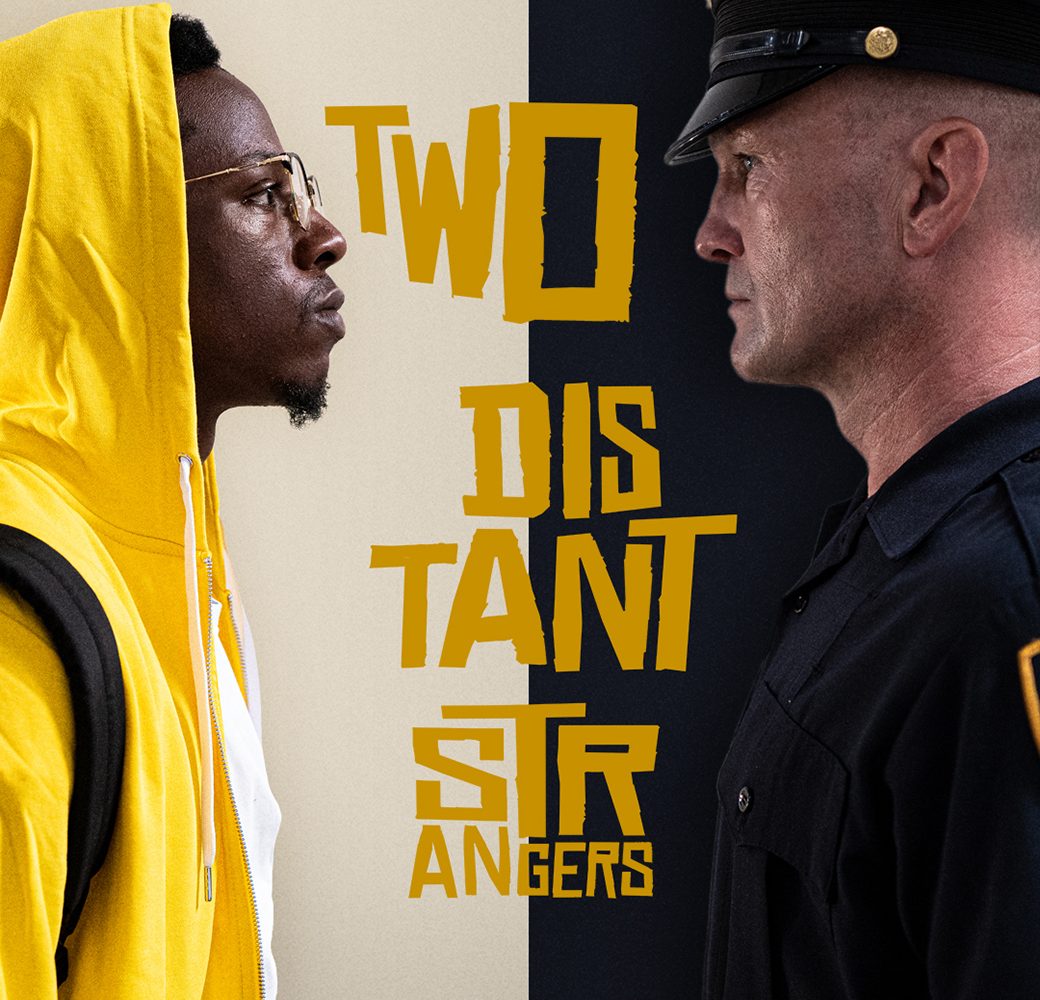 There are films that entertain, and then there are those that make you think, feel, and most importantly, look inward.

Two Distant Strangers, a short film starring Joey Bada$$, Andrew Howard and Zaria, tells the story of Carter James, a Black cartoonist that, after spending the night romantically with a young woman named Perri (played by Zaria) heads home to feed his pit bull when he gets stopped by a white police officer (played by Howard). What happens next is all-too-familiar: Carter gets tackled to the ground and strangled at the officer’s hands.

Written by Emmy-winning writer and producer Travon Free over the span of five days in July of last year after Free had attended the Black Lives Matter protests following the police killings of George Floyd and Breonna Taylor—he brought the script to Oscar-nominated Martin Desmond Roe with hopes to tell this important story.

“He just immediately was like, ‘that’s an incredible idea, we have to do it like right now,’” Free said over a Zoom call.

With the support of an array of executive producers including Kevin Durant, Mike Conley, Rich Kleiman, SLAM’s Vice President of Special Projects Samir Hernandez and even producer Sean “Diddy” Combs, the film is honest, raw, and heartbreakingly real.

There’s a sense of nervousness throughout the short, invoked by Carter’s agony every time he wakes up and realizes he has to face the same fate. While many films and shows have used the concept of a time-loop cinematically, such as Russian Dolls on Netflix, Two Distant Strangers uses it to emphasize a point: Carter’s reality is the harsh reality we, people of color, are all living in.

“As black people as black men and women, we see these stories all the time of people being murdered by the police and often times with no weapon or not trying to do any harm or trying to get away,” says Free in a Zoom call. “All those scenarios where it’s like the person should be alive no matter what they are trying to accuse them of, they should be alive. So when you see those stories at least for me you know, I go through the cycle of emotions of like anger and sadness and internalize all that pain.”

Carter’s story is a fictional portrayal of the real-life tragedies that have actually happened to people of color such as Eric Gardner, Tamir Rice, and, in December, Casey Goodson Jr., like James, was trying to get home after going to the dentist and Subway but was shot and killed.

Two Distant Strangers throws the heavy truth at you and makes you sit, watch, and feel that weight. And, as Conley wrote on Instagram, “this film creates opportunity to start more meaningful conversations, create change, and continue involvement in these issues.”

SLAM caught up with Free, Conley, Durant, Kleiman and Tim Jordan, who works with Conley, to learn more about the film, the script, and how it felt to be a part of such an important project:

SLAM: Tell me about the thought process behind the film, and how you came about writing the script? When did you begin writing the script and what prompted you to make a movie about police brutality? I read that you wrote the short in five days, after participating in Black Lives Matter protests.

Travon Free: After around that time it was like Brianna [Taylor] it was George [Floyd] it was Ahmaud [Arbery] and like so there was like three of them so close together that, you know, it felt like we’re living that cycle so often, so close together Because I work in film and TV and movies are my reference point for everything, I immediately latched on to Groundhogs Day and I was like you know I feel like there’s a way to tell this story, using this story device that can allow people to have some insight into what it feels like to, to be us what it feels like to have to go through this cycle of emotion so often.

Tell me about the reason for portraying this like a time loop, where the same scene keeps happening over and over again?

Travon: I wanted Carter to be some representation of all of us, I wanted everyone to be able to see everyone in Carter whether it was like me, Samir, Mike, Tim, anybody even, even you know young women, even though he’s like a  male character because you know as much as this happens to, to black men and women, we often see the videos of, of young men being killed by the police repetitively. I made it so that he was such a normal guy, but you know he was doing things that in some ways could arouse some level of suspicion but are still very normal things and should be left alone for like smoking a cigarette or carrying a lot of cash and things of that nature. Those aren’t crimes, but you know those are things that instigate interactions with the police sometimes depending on where you live, and I wanted him to feel [how] every day, black men women feel today. For people to see that you don’t have to do anything, you can just be a normal person with, you know, your money that you earn from work because some people do get paid in cash and whatever the case may be.

As an Executive Producer, Mike what made you want to get involved with this project and what were your earliest thoughts about the concept of the film?

Well, initially when it was brought to me by Samir and Travon, it was they knew who they were bringing it to man, they brought it to the right person.

It was a film that I visualized as you know, reality for so many of us. With my background being in Memphis, and, you know fighting for social justice, it was right up my alley and it was something that I wanted to support in any way possible to be able to you know see this film through it.

What were everyone’s thoughts and emotions when watching this film. It’s definitely heavy.

Kevin Durant: From the minute we saw the script for this project, we knew it had the potential to be very powerful and we wanted to be involved. Getting to see it come to life on the screen was an intense experience – I also had the opportunity to screen it for my teammates and coaches at the Nets, and I think everyone came away with the same feeling that I did that the film is telling a really important story about the Black experience, but in a way that is real and raw and not at all preachy.

Tim: Um, I was originally sent the script by Samir to connect to Mike and when I read the script—it was a Saturday morning and I never will forget: I opened up the file, and I was about to cook breakfast. Reading 15-20 minutes, reading the script, like with the doors of my refrigerator open because it was that captivating, it was that good. And for the first time I saw the film, I felt like initially like, this is exactly how I envisioned it, and then, it was, this is exactly how I feel. Like, this is the perfect expression of all of the emotions that I was struggling through on a personal level.

‘With everything that was going on and just realizing like, on a random jog, I got angry in the middle of a jog I felt my face like scrunched up and I’m like what’s wrong with me? I realized it was because of how people, it was after Ahmaud Arbery that I could see how people are just even looking at me and it was like because I’m black their even looking with fear or concern like dang, people were scared for me in certain situation it feels like. I just don’t want to be looked at as that. I want to be seen but I don’t want to be noticed in that way just because of the color of my skin.

Zaria said, “This is where we can point people to when we don’t want to explain to them or we’re tired.” I just think it’s really really impactful and the world truly needs to see this film.

Mike Conley: Yeah, me as well. I think it was a combination of all the years you know, kind of put together in one short film of all the instances in which, from outside looking in, if you’re not African American you immediately think of what the individual might have done wrong in those situations to give themselves you know give the police a reason to soot. And it’s been so hard to explain how that just isn’t reality for us like the reality is: you see somebody smoking a cigarette or just asking questions like being able to ask a cop “why are you pursuing me this way” or like “what is the reason for your interest in me” and all these things that lead to such tragic moments. I think that’s huge to kind of show that visually for the general public and people to [help them] understand what my uncles and my grandparents taught me, like sometimes when you get pulled over you just pray, man. There’s nothing you can do sometimes [but] just pray that everything comes out right like you can show your identity you can do everything you want to do in the right manner and still get shot or have something come out of that.

So it’s just, it was a great way of portraying it and allowing I think all of us to kind of exhale a little bit that we have this film to be able to show all those examples.

For you, Rich, how does it feel to be involved in this project—and then to see it come to life?

Rich Kleiman: Travon is such a gifted writer that it was really easy to visualize how incredible this film could be from the very first read of the script. It was an honor to be involved with the film from a very early stage and to help fund its creation, and the results are better than we ever could have expected, particularly with a team that was able to film successfully during the more challenging days of the pandemic.

Every time I watch this film, I feel more proud to be involved—I think the storytelling and the acting are bar none, and the message stays with the viewer for a long time.