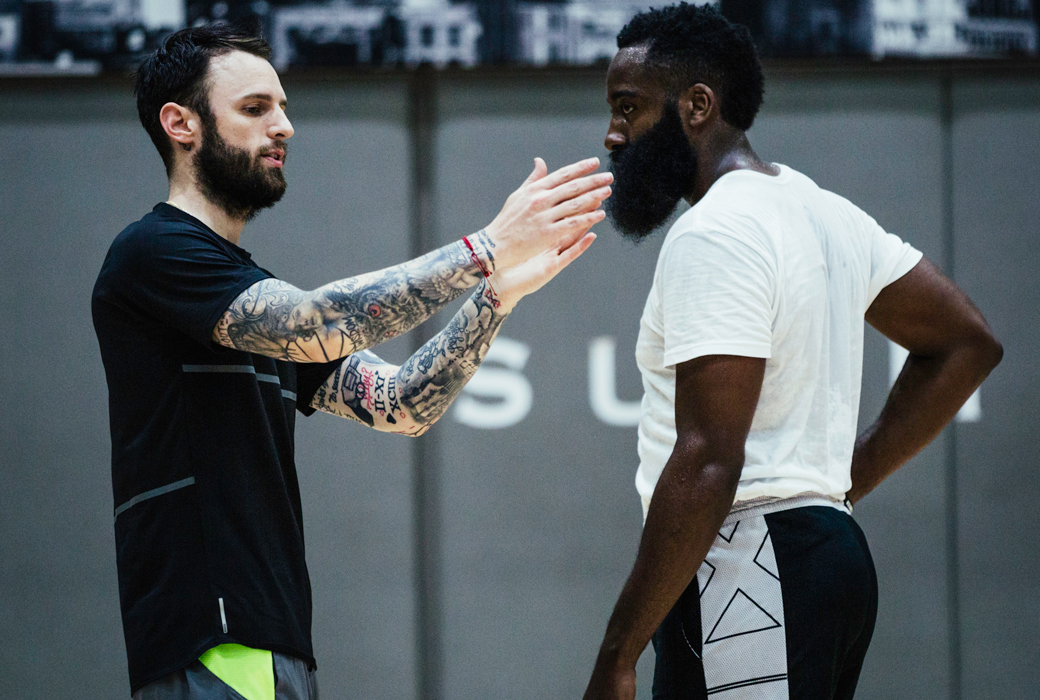 It started discreetly, that’s why trainer Chris Brickley called his NYC open runs “Black Ops.” Now everyone who follows basketball knows about the ridiculous pick-up games and workout sessions that happen in Brickley’s gym over the summer. Here, we get the insider breakdown of another year of Black Ops Basketball. — Ed.

Cole lived in the gym. He would put in 60-90 minutes on the court pretty much every day. Even when he was off, he would come by and observe guys like CJ McCollum and Donovan Mitchell work out. He really is a student of the game. He’s hungry.

One of my favorite workouts is an 18-minute shooting drill. It consists of 18 straight minutes of 3s. For nine of those minutes, the player is on the move; and for the other nine, they stand still. James Harden had the summer record with 265 makes. CJ McCollum finished second with 261. Those numbers are ridiculous!

When Ty played in the Black Ops runs, he controlled the game. He was hitting threes from almost half court and also making his teammates better. One day, he won every single game (nine straight). Ty is going to have a big rookie year.

J. Cole played in a handful of Black Ops runs, but one of the days was particularly memorable. Sharing the court with nine NBA guys, he hit 3 game-winners and shot 7-8 from deep.

Heading into Team USA tryouts, Donovan would come in the gym every morning with a chip on his shoulder. He logged double sessions a lot of days, too. He was extremely focused and pushed himself to be as ready as possible for USA. His work was rewarded by his great play in the World Cup.

James would work out daily and he’d run suicides on his own afterward. One day, following a tiring session with two other NBA players, James still got on the line and knocked out his suicides. Averaging 36.9 points per game doesn’t just happen. Tremendous work ethic is required.

Melo worked very, very hard this summer himself, but he also helped others get better. He did individual sessions and played one-on-one with Cole Anthony, Kyle Kuzma, Julius Randle, Donovan Mitchell and Terrence Clarke. He shared his knowledge and taught them how to do specific moves. Melo showed his maturity and his leadership qualities. He didn’t have to do those sessions. He did it because he wanted to pass on his wisdom to the next generation.

Imagine these two in the same backcourt. It’s a coach’s dream. It started in Louisville, when Mitchell and Trae worked out together and played pick-up against the Cardinals’ men’s basketball team. Then when we started the Black Ops games, they ran together and it was a scary site. They have great chemistry.

TJ played in a few Black Ops games and was unstoppable. He can score in a number of ways and he’s highly underrated on a national scale.

The North Carolina crew is very close. Not only would they play on the same team during Black Ops runs, they would also work out together at night.

Adrian Griffin Jr was the youngest player to ever play in a Black Ops run. He was 15 years old and he was on fire. His first outing, he scored over 20 points and played like a grown man. Everyone left the gym impressed. Terrence Clarke also put on a show. His handle reminds me of Jamal Crawford and he’s very skilled. Kentucky got a great one.

James and Russell worked out together and I said, ‘First to win 10 drills wins the workout.’ It literally came down to the last shot. It was 9-9 and the last drill was 50 threes on the move. James got 35. Russ was at 34-49 and the last shot would have tied James to send the workout into overtime, but he missed it.

Any time Russ is on the court, he brings a whole different level of intensity. I love it.

Oubre really had 16 dunks in a single Black Ops run. And he had a beanie on when he did it, too. The internet ran with it. #BeanieKelly