SURGICAL SUMMER: Rico Hines Is Pushing Hoopers to the Next Level 💪 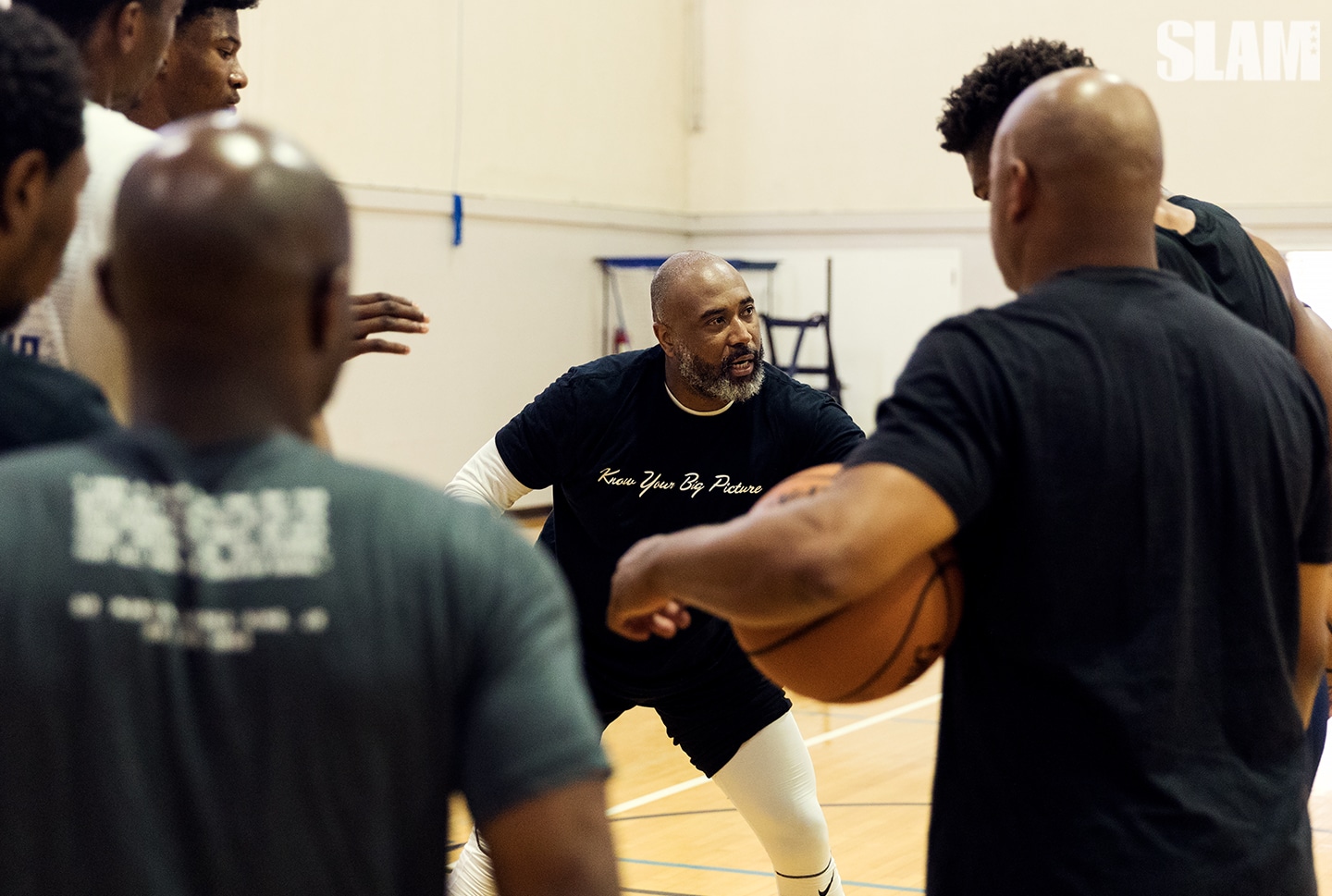 Rico Hines compares player development to boxing. When a fighter is preparing for a bout, he believes the training regimen should include sparring in order to get a feel for opponents and sharpen the skills needed. Same rules apply in basketball. No amount of cones or chairs does a player who’s looking to elevate their game any justice without live competition.

“I’m a big believer in playing,” he says. “I didn’t believe in guys working 1-on-0 because I already seen this blueprint work even before I got to UCLA.”

Hines, 41, is at the helm of the top offseason pick-up runs for NBA players. Located on UCLA’s campus, the games there date back decades. First organized by Magic Johnson, this was the spot for seasoned vets or incoming college guys looking to play against the best competition in the city.

“When I signed to come play here in ’96, this placed was filled with Hakeem Olajuwon, Magic Johnson, Penny Hardaway and Kobe Bryant,” Hines says. “It was such a tradition—and you had to come be a part of it.”

Hines brought back that tradition of having the League’s best come through Westwood during the offseason in 2016. Three courts—winners, losers and losers-losers—with games played up to seven. Once the game-winning basket is scored, the only way the game ends is when the player makes a free throw. Hines, with a whistle around his neck, oversees everything, calling fouls and counting down from 10 to make the game fast paced.

One day, it might be Kevin Durant and Devin Booker on the same team putting on a scoring clinic. And another it’s James Harden and Russell Westbrook going at each other as if it were the postseason. LeBron James was in attendance multiple times last year, too.

“Every time [Kevin’s] here, he’s trying to get better that day,” Hines says. “I really respect him for that.”

Hines’ runs have drawn attention online—just search social media and you’ll find an endless amount of content that’s been packaged for feeds on a daily basis.

“Real basketball people knew,” Hines, who joined Instagram in 2017, says about the runs. “I just wasn’t doing the social media.”

Hines played for the Bruins from 1997-2002. He began working out players on campus while rehabbing a torn meniscus during his junior year. Over the course of 14 years, Hines has worked as a player development assistant with the Golden State Warriors (2006-10) and was on the coaching staff at St. John’s (2010-15). From 2016-19, he served as an assistant coach for the G League’s Stockton Kings (formerly the Reno Bighorns) and was recently promoted to player development coach for the Sacramento Kings.

On a Wednesday morning in late May, Hines is working with Thomas Bryant, a second-year center from the Wizards. Bryant’s working on a series of dribble combos at the top of the key, followed by a floater in the paint. The latter part of the drill consists of more combos, pick-and-roll situations and relocating to the corner for a three-pointer.

“I like that shit,” Hines says, acknowledging Bryant’s ability to extend his range.

Bryant moves outside the block and is instructed to finish off the point guard’s penetration as Hines plays help defense. After a handful of possessions, the two begin to jaw in a friendly manner back and forth—Bryant when he finishes through contact, and Hines when he occasionally gets a steal—as the teacher and student are doused in sweat.

“I thought it was a good fit because of the way he trains and pushes people,” says Bryant, who has known Hines since high school, after his workout. “He keeps it really real with you and teaches you everything you need to know and want to put into your game.”

Hines is hands-on during his sessions. In an individual or a group setting, he takes pride in being meticulous and making sure everything—from the dribble to the footwork to the finish—is on point.

“I think it’s my passion for the game,” Hines says on what sets him apart. “I’m not giving guys a basketball to do a million ballhandling drills.”

Another player who spends his summers at UCLA is Pascal Siakam. Hines has been front row for Siakam’s development since he was contemplating leaving New Mexico State for the Draft in 2016.

“It’s awesome, man,” says Hines of the progression. “One thing about Pascal is that he’s always had a winning, contagious basketball spirit. He just always made winning basketball plays, had a good basketball IQ, played hard as hell and gave a fuck about winning and losing.”

Siakam joins Monta Ellis as Hines’ second MIP. With a résumé and track record that speaks for itself, Hines will continue to devote his time to those who want to take their game to the next level.

“Give me three of your summers—early in the morning, weights, then come back in and play and shoot at the end,” he says. “If we do that for four months, I guarantee you your confidence will be sky high.”