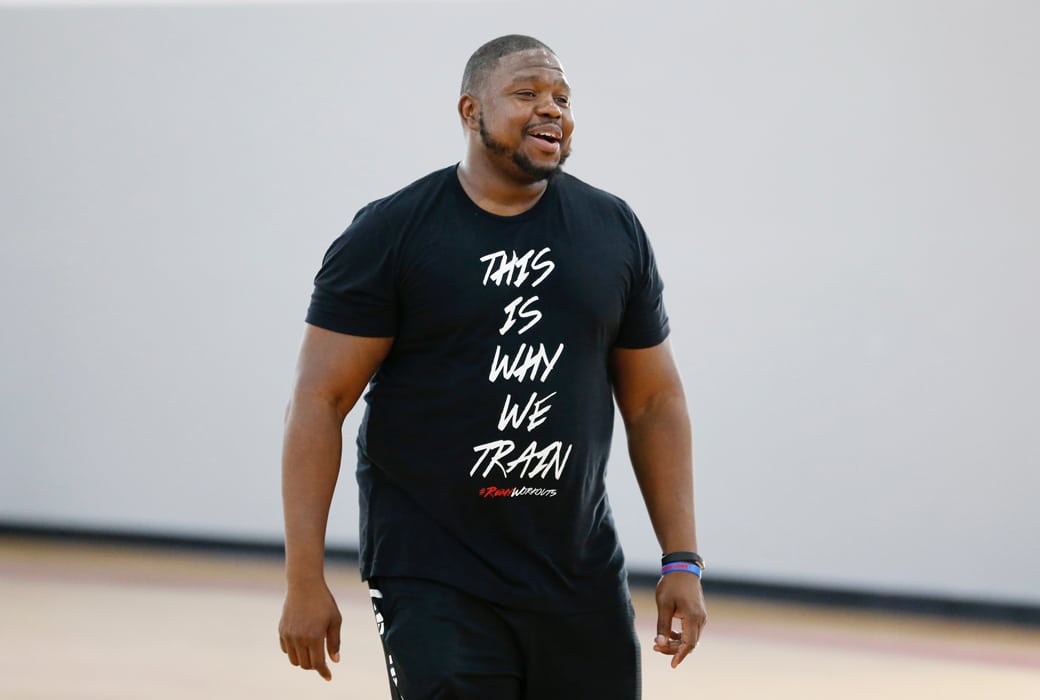 Skim his Instagram account and you’ll know everything you need to know about Stanley Remy’s place in the game today. There he is in Miami with Dwyane Wade, helping the future Hall of Famer extend his NBA career. There he is with Duke freshman-to-be Vernon Carey, helping the scary good prospect prepare for his. There he is in China with CJ McCollum on an offseason sneaker tour. The list goes on. If you want to know who’s helping to keep your favorite player sharp right now, there’s a pretty good chance it’s Stan.

What his IG won’t tell you is how Remy became arguably the game’s most trusted skills trainer. He’s happy to do that himself—assuming you can find some time on his schedule between workouts.

The short version: Remy grew up hooping in Miami Gardens, a good but not great player who eventually wound up playing NAIA ball at Morris College in South Carolina. But even in high school, he started showing signs that his real impact would come before the actual games were played. He recalls a time his squad was set to face a team in the playoffs it had already been blown out by twice that season, so he convinced his coach to let him draw up a new game-plan. His squad won the rematch by double digits.

It was around that time, hooping at a local LA Fitness, that he met Keyon Dooling, who was about five years older and just starting out his NBA career. The two hit it off, quickly linking as friends and workout partners. Inspired by that connection, Remy was a sophomore in college not long after when he decided he’d found his calling.

“I started training my own teammates. I said, Hey, this is what me and Keyon work on in the summer, this is what got me so much better. It was one player, then two players, then 10 players. And I knew that when I finished college, this is what I wanted to do for a living.”

It’s been more than a decade since Remy left college and began gradually building up a client base and reputation. Dooling played a huge role, lending him both credibility and copies of his NBA playbooks, which Remy studied religiously. Eventually, Dooling even agreed to let Remy help refine his jumper; when Dooling was asked in interviews the following season about his improved shooting, he shouted out Remy for the cameras. Not long after, the calls started coming in.

“Other NBA players started contacting him like, Who’s this guy you’re talking about?” Remy says. Soon, guys like Rasual Butler, Udonis Haslem, James Jones and more were showing up at that LA Fitness, hoping to benefit from Remy’s instincts and vision. Explaining his success, Remy emphasizes his focus on translatable skills—“I’m very in-game situational, things that can be implemented right away,” he says—but mostly, it’s about being able to relate.

“The main thing is understanding how NBA players think,” he says. “It’s understanding how they live, how they talk, hanging out, going to dinner with them, and how they’re receptive to information. Every player is different, so you can’t teach everybody one way.”

There’s no doubt his personalized approach is working. The playoffs were a prime example, as Remy found himself flying between Philly, Toronto, Milwaukee and Detroit to work out Jimmy Butler and Andre Drummond, all while keeping tabs on his home base in Miami, where clients range from other NBA players to college and high school ballers. He’s growing similar sessions in Orlando, Los Angeles and Atlanta, with plans for more, building toward the day when he hopes to employ “30 trainers who are better than me.”

Don’t bet against it. Another peek at his Insta offers ample reminders that Remy is doing something special. More often than not, you’ll see a comment from Dooling whenever Remy updates his followers on who he’s helping next: It’s that time of year that made you legendary my bro. Go get em and can’t wait to support you all summer champ. Keep building the brand fam.