Though a few highly talented players will take all or some of the summer to rest, the WNBA still provides a whole bunch of reasons to pay attention in 2015. 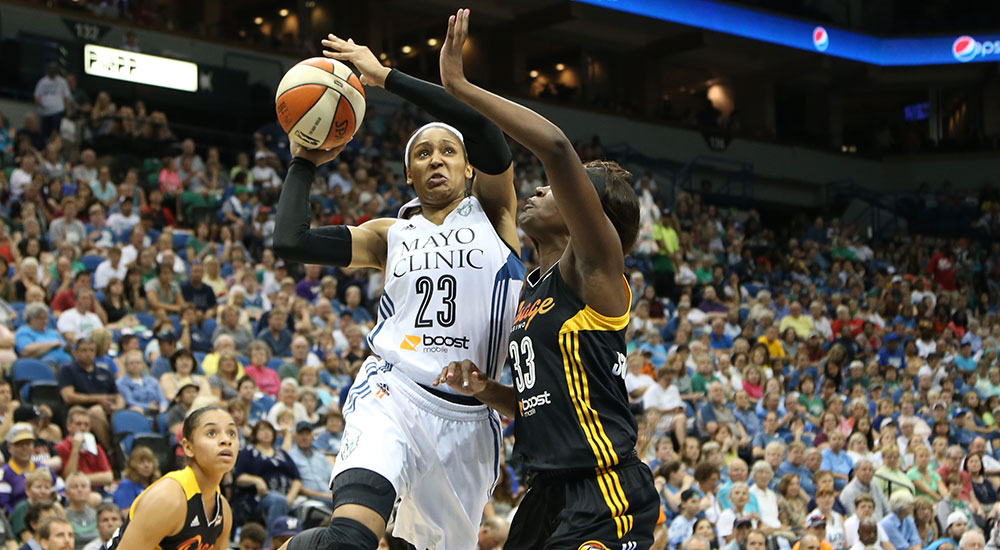 It’s been hard to keep track of the WNBA this offseason. Diana Taurasi, Candace Parker and Penny Taylor are healthy scratches for all or part of the summer, and Sylvia Fowles may join them, but the W is still the best women’s basketball there is. Check out our predictions, with last year’s record and place in parentheses.

1. Washington (16-18, tied for second): In a conference filled with questions, the Mystics may have the fewest. Emma Meesseman is an emerging star (just 22) at power forward, the backcourt is solid, Kia Vaughn is serviceable at center, and if either Armintie Herrington or Kalana Greene lay claim to the small forward spot, Mike Thibault has enough pieces to maneuver his way to a first-place finish.

2. Atlanta (19-15, first): Wisdom says the most important position is PG, and the Dream jettisoned theirs, Jasmine Thomas, who got most of the minutes last year. Word is Celine Dumerc will not return to the league. That leaves rooks Samantha Logic (is she quick enough?) and Brittany Hrynko (is she consistent enough?) to run things. The rest of the lineup, led by Angel McCoughtry, is quality, so a solid performance at point guard from Shoni Schimmel (pg. 62) should put the Dream back on top.

3. Indiana (16-18, tied for second): The Fever have a lot of players in their prime but the question is whether that prime is good enough to get Indiana back over .500. One reason for the uncertainty is that the team’s best player, Tamika Catchings, waved goodbye to her prime long ago, and this will be her last season as she turns 36 in July. Like ATL, though, the pieces could fall into place, and Indiana could surprise. Or not.

4. Chicago (15-19, tied for fourth): Will she or won’t she? It says here Sylvia Fowles won’t return (she supposedly wants a trade), and that pushes the Sky down a notch. With the 6-5 Olympian, Chicago would have been the heavy favorite in the East and had a good shot at a title. Elena Delle Donne is one of the best, Cappie Pondexter could be rejuvenated by a return home, and the rest of the roster has enough juice to give the stars room to work.

5. New York (15-19, tied for fourth): Bill Laimbeer got two first-round picks, but it’s unclear if either (Brittany Boyd and Kiah Stokes) will be difference-makers this year, or ever. Otherwise, the Liberty have Tina Charles, tremendous when motivated, Epiphanny Prince home (when she’s not fulfilling overseas obligations) and well, not much else.

6. Connecticut (13-21, sixth): If Chiney Ogwumike hadn’t hurt her knee in Europe, the Sun would be in the mix. Without her, though, they need to have Chelsea Gray make her delayed debut (she sat out last year with an injury) in grand style, and some pretty good players (Alyssa Thomas, Alex Bentley, etc.) figure out how to be very good. It could happen, but without Ogwumike and consistent outside shooting, the Sun could find it hard to rise.

1. San Antonio (16-18, tied for third): Dan Hughes always gets the most out of his teams, and this year, he has a lot of pieces in place for a surprise run. Kayla McBride, Danielle Robinson and Jia Perkins are very good; Jayne Appel, Danielle Adams and Sophia Young-Malcolm do their part up front; and if Alex Montgomery can again shoot better than 40 percent from three, the Stars could shine very brightly.

2. Los Angeles (16-18, tied for third): The big question is when Candace Parker will return—and forgive Sparks’ fans if they replace “when” with “if,” as CP3 doesn’t need the money, has a bad knee and like all the other elite players, knows she won’t get any time off in 2016, an Olympic year. Even without her, though, this is a very strong team, with solid Jantel Lavender and exceptional Nneka Ogwumike up front, good guards (Kristi Toliver, Erin Phillips and Temeka Johnson) and a vet in Alana Beard.

3. Minnesota (25-9, second): The Lynx have been blessed with incredible injury luck in recent years: Only once in the past three seasons has a starter played fewer than 29 games, but all those starters, except Maya Moore, are now 31 or older. Healthy, this is the best team here; but the law of averages says that the Lynx are due to be unhealthy in 2015.

4. Tulsa (12-22, tied for fifth): The Shock have been giving youngsters big minutes in recent years, and the growing pains are evident, but it looks like they’ll give that scenario another whirl by tossing No. 2 overall pick Amanda Zahui B. into the mix. Courtney Paris is fine at that spot but limited enough that the combination of Skylar Diggins, Odyssey Sims and Glory Johnson aren’t quite enough to challenge the league’s best. But if Zahui is indeed wowie, the Shock could live up to their name.

5. Phoenix (29-5, first): That thud you hear is the mighty Mercury coming back to earth. Taurasi is taking the summer off (with financial encouragement from her Euro team), Aussie vet Penny Taylor is doing the same and Erin Phillips is in L.A. Yes, Phoenix still has the very great Brittney Griner and the very good Candice Dupree, but unless 6-5 DeWanna Bonner can play all three perimeter positions, it’s going to be a long summer.

6. Seattle (12-22, tied for fifth): The basketball gods smiled on the Storm, gifting them Jewell Loyd with the No. 1 pick, but new coach Jenny Boucek still has little to work with. Sue Bird is 35 with bad knees, Lauren Jackson isn’t playing, Camille Little is gone, and only undersized Crystal Langhorne is a quality player in her prime. Then again, Breanna Stewart awaits the lottery winner next year, so maybe the skies aren’t completely dark.