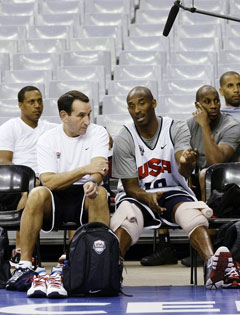 Christy Winters Scott is an analyst for ESPN, CSN, and Fox TV, high school basketball coach and member of the University of Maryland’s Athletic Hall of Fame. Today, Christy digs into what representing the USA means for members of the men’s and women’s national teams.—Ed.

As 2012 Summer Olympic Games are set to commence, my mind has been consumed with how each athlete feels about their individual journey. Both the men’s and women’s national teams were in Washington, DC, recently, and I couldn’t help but wonder how representing the United States of America at the Olympics impacts their mental preparation for a Gold medal.

When I posed the question to All-Star guard Kobe Bryant, he responded, “It is a special moment for all athletes who participate in the Olympics because of the beauty of competition.”—profound words more about the respect of the opportunity than the pressure of bringing home the gold.

When I posed the same question to All-Star forward Swin Cash, she stated, “There is nothing like wearing U-S-A across your chest, and knowing that you are representing your country. There is a strong sense of pride that consumes you when you are out there competing, and it gives you that extra edge.”

Each of the aforementioned athletes have won a Gold medal at the Olympic games. But at their age, 33 and 32 respectively, this may be their last hurrah.

Swin Cash, who competed in her first Olympic games in 2004, could not compete in the Beijing Games in 2008 because of a back injury. The London Games will be that much sweeter for Cash,

who will be playing for her former collegiate coach at Connecticut, Geno Auriemma: “I’m able to dictate that this will be the last time for me at the Olympics. It feels really good to say that I want to go out with a bang.”

Had he attended college, Kobe would have played at Duke, for USA Basketball coach Mike Krzyzewski. How ironic for both Cash and Bryant to have a long history with their respective USA coaches. There is most definitely a comfort level there for all parties involved.

Auriemma has said recently, that he is now coaching a “complete player,” and woman, on and off of the court, in Swin Cash. He recruited Cash for her potential, and now has said that he has the opportunity to coach the “finished product.” Coach Auriemma will also have six former Huskies on the USA roster in London. He has said that he now has six “assistant coaches” on the floor, and that this will be the most rewarding experience of his career. I believe it.

For Mike Krzyzewski, when asked about recruiting Kobe from Lower Merion High School in Philadelphia, he spoke with confidence about the near catch of young Kobe Bryant for his 1996 recruiting class. “Had Kobe not decided to enter the NBA Draft early, he would have been at Duke,” Coach K said.

On the court, it’s clear to see that Kobe has the high level of respect for Coach K. He has undoubtedly seen a similar evolution in Bryant as Auriemma has found in Cash.