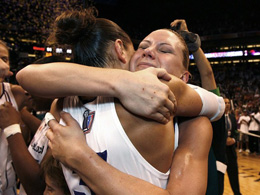 “What’s up, Ben?!” Ketia Swanier asked me. If you’ve met Ketia, you know that she has maybe the nicest way of saying hi of anyone you’ll ever meet. Maybe it’s that Southern drawl and polite tone she has when she speaks.

I remember that day it like it was yesterday. It was early October 2009 at about 10:15 in the morning. It was a relatively chilly day in Phoenix – only about 90 degrees. The Phoenix Mercury and Indiana Fever were in the midst of holding their final media session before Game 5 of the 2009 WNBA Finals. The series was deadlocked at two games a piece. Phoenix won Game 1 in overtime (in what many consider the best WNBA game ever), Indiana took Game 2 in Phoenix and Game 3 back home in Indiana, and Phoenix responded in Game 4 to tie the series at 2-2 with a 90-77 win.

The championship would come down to the deciding game in Phoenix, winner take all.

I was on my way to talk to Temeka Johnson, Cappie Pondexter, and Diana Taurasi when I stopped by to say hello to Ketia Swanier. Ketia and I talked movies for a few minutes; the recent flicks we’ve seen and others we look forward to viewing, and then proceeded to discuss what everyone else was talking about — Game 5 of the 2009 WNBA Finals.

I had just finished up speaking with Lin Dunn, Katie Douglas, and Tamika Catchings of the Indiana Fever and had to hurry over to the Mercury players and coaches. Media availability was only about 20 minutes for each team so there was a scramble to get everything you needed from both sides. Obviously, the Fever didn’t want to come back to Phoenix for Game 5, but every single player and member of the coaching staff felt comfortable and confident they could come away with a win on the Mercury’s home court. In typical Tamika Catchings fashion, she was visibly grateful that she was a pa

rt of something so special and even had the opportunity to play for a WNBA Championship. Catchings is always fantastic to speak with and gives amazing insights to the game, but there was a different vibe that day that was unmistakable and unlike any of the prior games. Both teams were slightly less jovial and increasingly more focused. Suddenly, it was all very real — players and media were beginning to realize that Game 5 could cap the greatest Finals series in WNBA history.

As I made my way over to the Mercury’s side, I chatted with Temeka Johnson and Mercury assistant coach Bridget Pettis about recent books they read and offered a couple of my recommendations. At this point, I just wanted to lighten the mood at bit since the players and coaches were getting asked the same questions over and over again by the media. They must have heard, ‘What will it take to win Game 5?’ a dozen times each.

Meek and Bridget were always easy to speak with and more than willing to give up a few minutes of their time to the media. They both were friendly as ever, but their minds were at another place all together. Honestly, if I were in the Mercury’s or Fever’s position, I wouldn’t want to talk to media at all. I’d much rather shut off the rest of the world and take some time to bask in the moment, knowing this might never happen again. I’d be a nervous wreck! Still, the players understand that talking to the media is part of their job and are professional about it.

After about 15 minutes of mingling, I finally made the journey over to speak with Cappie Pondexter, Diana Taurasi, Tangela Smith, and Mercury head coach Corey Gaines. They all had a similar message and tone in their voice which (long story short) consisted of simply playing hard and leaving it all on the floor. There really wasn’t much else they could say that would be ground-breaking; they knew what the Fever was going to bring to the table in Game 5 and the Fever knew what to expect from the Mercury. What more could either team say that hadn’t already been said? As I mentioned, they were getting asked the same questions over and over again so I took a step back and just listened. I watched their body language, their focus, and marveled at their concentration. I used that opportunity to soak everything up — the passion, the intensity, the appreciation, and the joy of playing such a high profile game on the biggest stage imaginable.

Once media availability was over, I wished both teams good luck and stood at center court at US Airways Center for a couple moments. I couldn’t help but think that in just a few hours, the championship team would be crowned at this very spot, putting the finishing touches on the greatest WNBA Finals of all time. It was one of those out-of-body experiences that last just for a few seconds, but you’ll remember for the rest of your life.

This was, by far, my favorite WNBA moment.