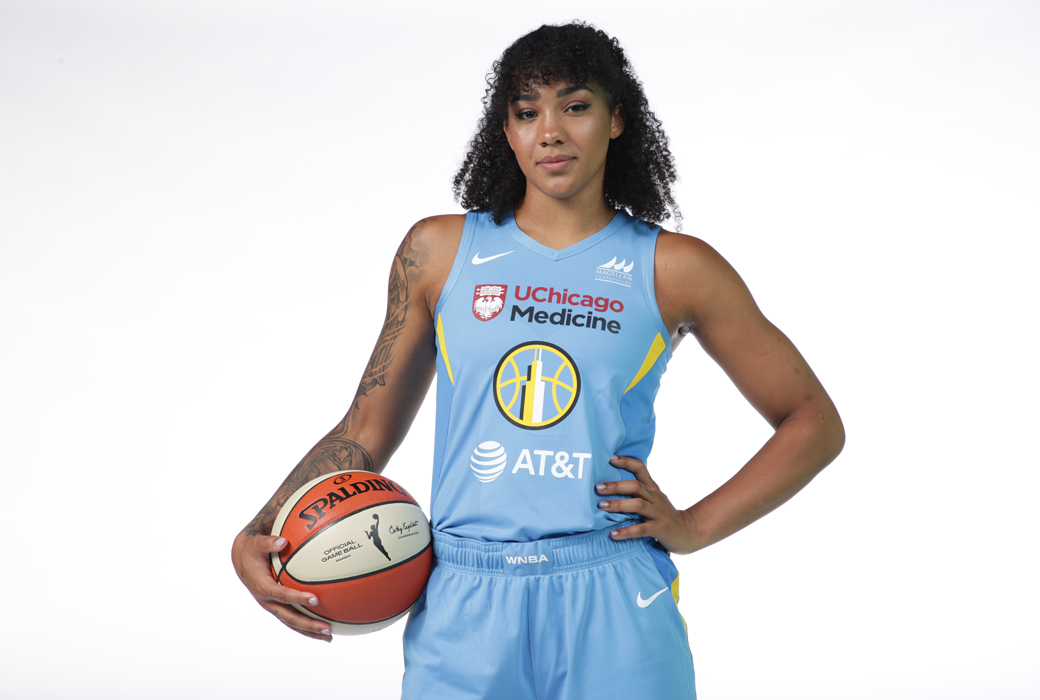 Gabby Williams knows she’s fortunate. As a two-time NCAA champion with UConn and star on the WNBA’s Chicago Sky, she has a public platform to speak out on issues and help bring about real change.

Williams is putting that passion and natural curiosity to good use.

At just 23 years old, Williams—drafted 4th overall by the Sky in the 2018 Draft—is emerging as a star both on the court (she won the Spanish League championship last year) and off the court, speaking out most recently about racial and social justice issues, police brutality and voter rights—causes near and dear to her heart.

“Right now, I’m just trying to stay as involved as best as I can and have my hand in as much as possible,” she says. “I’m doing things like making sure we are putting emphasis on voter rights and making sure no one is disenfranchised. So that’s where my focus is right now.”

When she learned of “More Than A Vote,” the initiative spearheaded by LeBron James and championed by Trae Young, Skylar Diggins-Smith and other prominent Black athletes and entertainers, she was ecstatic.

“That’s exactly what we need,” Williams says of the organization which aims to protect African-Americans’ voting rights. “We took [voting] as a joke back in 2016 and look where we are now as a country. I think people don’t understand the importance of it, but we need to educate people that voting does make a difference. This is the way to make change whether we like it or not.

“People don’t understand we’re not just voting for the president. We’re also voting for our district attorneys, our mayors, our governors, our sheriffs…If we had a different district attorney in Colorado, then Elijah McClain’s case would be opened right now,” she adds, referring to the 23-year-old Black massage therapist from Aurora, CO, who was killed after an encounter with the police while walking home on August 24, 2019.

“The WNBA is the perfect example of what intersectionality is. We’re dealing with Black issues, female issues, LGBTQIA issues and things like that, so I feel like we’re the most motivated and have the biggest advantage of coming together, especially now that we’re in this bubble,” Williams says of the League’s protected space in Bradenton, FL, where the 2020 season is being played.

“We can mobilize as a unit, as a group and it’s a very, very safe space in the WNBA because we deal with so many different types of discrimination. I think that allows us to bond,” she continues. “Everyone has been discriminated against in some kind of way. I just want to make sure that I am doing my part in educating my teammates and my fellow WNBA players and letting them know we can all help each other out and share our resources.”

Williams, a French-American dual citizen, has plans post-basketball to engage in more activism. She’s currently working on an “ally-ship” program in the League, which will connect players with community organizers in their respective cities, and is also linking with representatives from the Obama Foundation about other future plans.

“I’m just taking advantage of all the resources I have. It’s definitely something I want to do in the future.”

Meanwhile, she’s preparing for the WNBA season, staying positive and hoping for change.

“I think we need to stay motivated as we go through this [social unrest] and not get too defeated, because it is really exhausting and traumatizing to go through this right now. I’m just trying to remain positive and trying to celebrate the victories that we are getting out of this.”