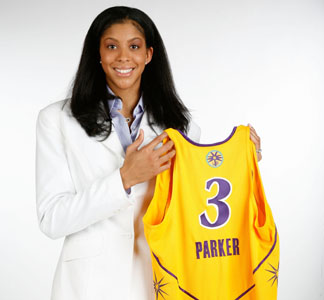 Starting with the 2008 Draft, I’m the new WNBA person here at SLAM, to go along with Adrienne “Goody” Goodson’s columns. Although the story of the day is not my arrival here, I’ll give a brief introduction…

My name is Stephen Litel and based in Minneapolis. I cover the NBA at HOOPSWORLD.com, as well as for the Downtown Journal in the Twin Cities. The 2008 WNBA season will be the third year I’ve covered the Minnesota Lynx, which coincides with Seimone Augustus’ rookie season. Not a bad time to jump into the mix, huh?

Yes, believe it or not, I’m a man who enjoys the WNBA. Get over it. This is not going to turn into a place for trollers to post continuously how the league is boring, not as athletic as the male counterparts, etc. It gets old, isn’t true and, to be blunt, is the argument of the uninformed. This is the one way I feel like Jim Rome…come strong or don’t come at all.

Moving on, as teams make their way through the Twin Cities to face the Lynx, I’ll interview them and create what I hope will be one of your favorite stops as you make your internet WNBA rounds. Diehards, bookmark SLAMOnline now because I want you to bring your incredible knowledge of the league to this space, as we all continue to support the game, teams and league we love.

Candace Parker. Honestly, you don’t need to say much more after that. She is, without question, the best player in this draft, one of the greatest female basketball players of all-time and is about to take the WNBA by storm. Although the draft is very deep this year and it’s not the most bold of predictions, I’m going on record right now with Parker for Rookie of the Year. Seriously, just put her name on the award now and save yourselves some time.

Parker lead her Tennessee Lady Vols to the National Championship Tuesday night–their second in a row–and is now the first overall pick of the WNBA Draft. If she hadn’t solidified her status as the number one selection before, she did once she separated her shoulder and continued to dominate with one arm. Her performance was legendary and she is preparing to tear it up during the summers for years to come.

So, the 2008 WNBA Draft has concluded. Although a majority of the top players were posts, many of them slid down the draft boards. As many teams chose by need rather than choosing the best player available, reactions to this draft are mixed.

That’s where you come in. What are your thoughts of the players drafted by your team? Which team stood above the rest, completely retooling their roster, and which squad was a draft day dud? Which selections were the most surprising?

As the WNBA season nears, I will tinker with what will actually become the norm in this space. If you have suggestions for what you’d like to help me create here, feel free to comment or email. I look forward to a beautiful relationship with SLAM and to stimulating conversation with the best fans in the world.

—
Stephen Litel covers the Minnesota Timberwolves and the NBA for HOOPSWORLD
and is a HOOPSWORLD Magazine contributor. Litel also covers the WNBA and
Minnesota Lynx on “The Exchange” for Downtown Journal in Minneapolis,
which can be found at www.downtownjournal.com.

Litel may be reached at slitel@hoopsworld.com.