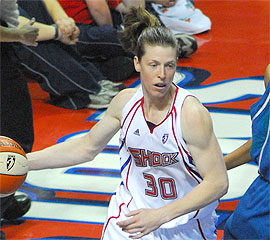 By Adrienne Goodson
Bill Laimbeer is nobody’s fool. The guards in Detroit will stay the same this summer and Katie Smith is on the top of the list. Her stats are off the charts so I’m not gonna go there but I will give you a glimpse into the mind set of an All Pro Olympic All-Star American if there is such a word. This girl is the truth if there is any. “Big Easy” is what I call her. Check it out:

Goody: Right out of college you went into the pros. Players like Tonya Edwards, Valerie Still, Andrea Lloyd, and Nikki McCray helped lead the team to a championship in 1997. Talk about your experience and the All-Star cast you played with on the Columbus Quest.

Katie: We were all a little overlooked when it came down to big names except maybe Nikki….cause she was coming off the Olympics. They were talented, had versatile games(inside/outside) and were crafty vets. On top of all that they were hillarious!!! We worked hard but we always had a sense of humor.

Goody: Brian Agler seems like a basketball wizard. Talk about his influence on your game as a young player.

Katie: He made a huge impact on my defensive game. He made me want to lock people up and make them earn it. We spent hours and hours on defensive drills and to this day I have nightmares:) But it made me want it and I am thankful for that. On the other end he just let you use your talents on offense….shoot the ball, drive, post up. He wanted you to be a basketball player.

Goody: You were fortunate to play in both the ABL and WNBA. Talk about how the folding of the ABL ultimately strengthened the WNBA.

Katie: I loved my experience in the ABL and am thankful that the WNBA was right there to continue my career in the states. I think that the ABL top to bottom was deeper than the WNBA at that time and when the ABL folded all that talented that came over and added to what was already there. It made it a much deeper and competitive league.

Goody: The Minnesota Lynx drafted you in 1999. Talk about how that team allowed for you to sharpen your leadership skills.

Katie: I was still like a vet at that time even though a young vet:) We had to get used to the WNBA schedule and that was different but being in Minnesota was great. The organization was excited to have a team, the fans love women’s basketball and are loyal. We were in the West and we battled every night. We fought to make the playoffs but came up short a lot. But for me you still compete and go out every night and try to find ways to win and I hope that I lead by example. Everyone that played left all they had out there and it was fun to battle with them. Those tough times help you enjoy the successes even more because of the work you put in to get there.

Goody: Most players suffer some type of injury during their career. In 2004 you tore your right meniscus while participating in the Olympic Games in Athens causing you to miss the rest of the season. Talk about your come back from that.

Katie: Yes it is a job hazard when it comes to injuries!! I actually tore my ACL for the second time on my right knee in 04 and did also have some meniscus damage. It was tough…..I was not a spring chicken and having already tore that knee before there were a lot of changes in that knee. The rehab was a little slower and I had a lot of different aches and pains than before and I was just hoping my body would give me a chance to get back out there cause I knew I would do the work I just needed it to heal well. My first season back I pretty much just rolled into training camp after maybe playing a couple pick up games and I personally was pleased by what I did. I competed on the highest level even though I can’t say I was 100%. So after that season I stayed home in the off-season and got my body strong for the next WNBA season.

Goody: For 6 years, you were virtually a one or two man team in Minnesota. In 2005, you were traded to the Detroit Shock where you had great talent surrounding you. Talk about how important it is for a team to have at least 4 all-star caliber players in order to win a championship.

Katie: At this level you need threats. One or two people can put up numbers but it won’t correlate into wins. You have to make the other team worry about everyone so that things open up and that you can make them pay for helping on someone. Also it is a long season and injuries happen and to have a handful of players who can be the man any night makes you that much more difficult to guard. It is fun to play with that talent in Detroit and you can bring your game but know so is everybody else.

Goody: Detroit has great depth. Plenette Pierson and the addition of LaToya Thomas and the fourth pick in the draft (Alexis Hornbuckle) will certainly deepen the bench beyond imagination. Talk about the importance of key players on the roster.

Katie: I think we really improved our depth this year and that is something we struggled with last year. I mean where do I start…….Tweety (Deanna Nolan) One of the best two guards out there…..her athleticism is amazing and on top of that her offensive skill set. She can score but is soooo unselfish and loves to play defense. Cheryl Ford……..A rebounding machine!!! She is a dominating presence inside and she has got her 15′ jumper going too. She loves to compete! She is coming off an injury and I know is chomping at the bit to get out there. Kara Braxton…..can run the floor, block shots, and score. I’m looking for her to be a little more consistent game in and game out but I am so ready for her to cut loose and play! LaToya I am looking forward to playing with and I know she can score and give our team another threat. Plenette Pierson what can you say….she battles every night and has a versatile game where she can take you outside or inside but I love the way she gets after it. And of course, the draft picks I think will come in and be great. As you can tell I am excited about getting started again!!!

Goody: Last year, the playoffs were less than a breeze for Detroit, but you still managed to make it to the finals. Talk about the road back to a championship and the mentality it will take to get there.

Katie: Yeah we came up a little short last year and am looking forward to battling back. I think it is a little easier when you didn’t win it the year before because you have that sour taste in you mouth from it. So the motivation that we have something to prove will hopefully get us ready every night to play and compete. I also think that our depth this year will help us go into the end of the season and the playoffs with a little more energy.

Goody: The WNBA has made great strides over the years and has repeatedly shown its ability to survive the test of time. Talk about the new CBA and how it gives hope to the next generation of female ballers.

Katie: I think that both sides did a great job on the CBA. It is realistic and a lot of what we got was quality of living stuff and also the ability to have more movement in the league. I also think that with them adding new teams and finding the markets that are right for us is all in the growing pains of any business. I think both sides are committed to keeping the league around for a long time so that the world can see the talent that we have.

Goody: You are known to be one of the most “hard working” individuals in the league. Comment on what it takes to be a Katie Smith in this league.

Katie: I do feel like I work hard but it is because I want to do the best job I can for my team. I want to be ready for whatever comes my way. You have to be disciplined in our job because no one is calling and asking are you playing or working out. It is you and how bad do you want it and how good to you want to be. I pride myself on the longevity of my career but not just that but at the high level I have been doing it for so long. It is not easy. But it is rewarding to still be doing something you love and doing it well.

Goody: Comment on Cheryl Reeve and what she brings to the team.

Katie: I love Cheryl Reeve!!!! First she knows her stuff and on top of that she knows how to communicate it to you. I love bouncing things off her or asking what can I focus on today and she sees the little things along with the big picture. She is a calming affect for me all season and I thank her for everything she does. She will get her shot to be a head coach very soon and whoever gets her will be very happy!!:)

This interview was the bomb. Katie Smith has been doing it for years. She is one of my best memories in the WNBA. Playing against her for 10 years was a blessing. She is truly one of the greatest of all time. Clearly, Detroit will contend for the title and without a doubt they will be in the Championship Hunt. Many have predicted the future of 2008 but I’ve got a feeling the fat lady still loves singing in the Motor City.

Stay tuned cause this year is en fuego people…