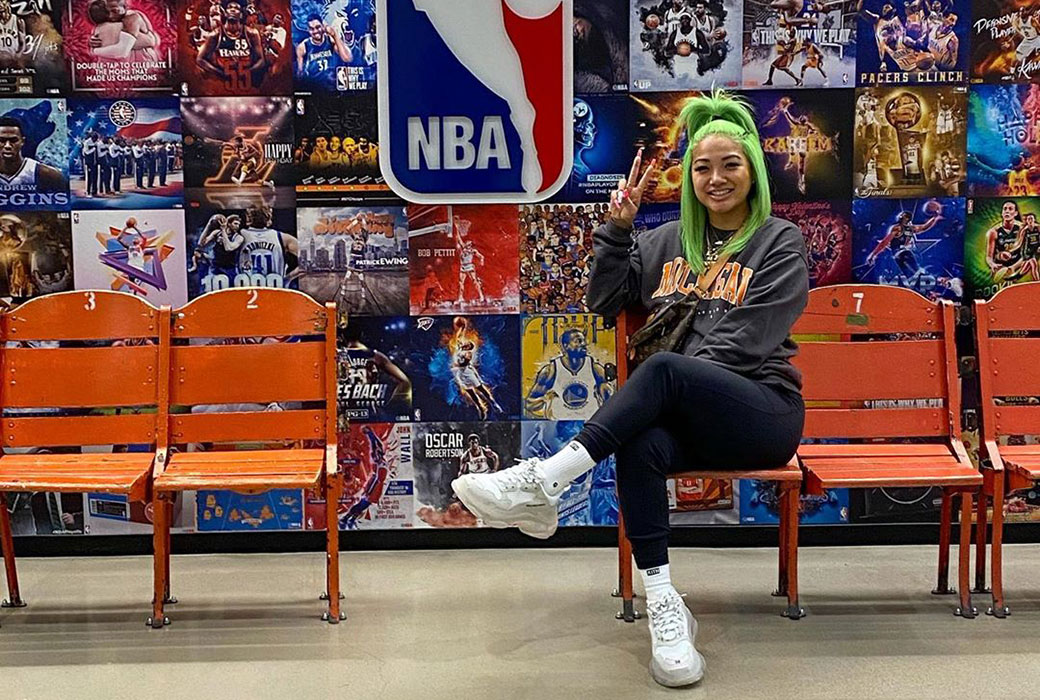 Kirihara’s style started long before she became a social media influencer with nearly 300,000 followers. It started with the mix-matching shoes during her childhood days on the courts of Seattle and as a college player at the University of Hawaii at Hilo. Her psychedelic-colored fashion has followed her all of these years, from red pants to neon hair. She describes herself as a “tomboy” and her style as “loud,” making Kirihara (@infamouskayce on Instagram) one of the most recognizable social media presences across all of sports.

“The goal was to play in the WNBA but that didn’t work out obviously,” Kirihara says. “Growing up I didn’t know I could be doing this. I didn’t know this was a thing at the time.”

Her introduction to the world of professional basketball started freshman year of high school, when Kirihara’s mom told her to get a summer job. Other students bagged groceries at a supermarket. Kirihara rebounded for the Seattle Storm as an official ball girl, a job she would continue throughout high school. She needed to finance her budding shoe collection, that, in high school, grew to over 100 shoes, she told The Shadow League.

After graduating from Hawaii-Hilo with a degree in Communications, Kirihara returned to the Storm as the Equipment Manager and Video Coordinator. There, she oversaw more than a dozen ball kids, while organizing team equipment, videos and statistics.

“That’s how I got my foot in the door with the WNBA,” she says. “I made all of my connections working with the coaching staff and then once I left the W and did my own thing, it was because the connections and the relationships I made while I was working.”

In 2016, Kirihara left the Storm to become the Creative Production Manager at Nordstrom. In the meantime, she kept racking up more and more sneakers, totaling over 200, from Air Force 1s (“I think everybody needs a solid pair of 1s, whatever color your little heart desires”) to Air Max 95s (“It’s a shoe I grew up loving and people always talked crap about them saying, ‘They look like sketchers.’ I’m like, ‘I don’t care.’”)

Her eclectic kicks collection became a foundational part of her success as an influencer. But she also had social media savviness which, she brags, dates back to her MySpace days. Even while working for the Storm, she served as a social media consultant for professional athletes. In 2019, after years of building a following, she decided to make managing her social media page a full-time job.

But pigeonholing Kirihara as a “social media influencer” fails to encapsulate her range of responsibilities.

“There isn’t a specific title [for my job],” Kirihaha says. “Obviously you can ‘umbrella’ influencer, but there’s so much that goes into that.”

For example, during 2019 WNBA All-Star Weekend, Kirihaha acted as a WNBA Kicks host, speaking with everyone from Elena Delle Donne to Kobe Bryant about their shoes. This past March, Kirihaha collaborated with longtime Seattle Seahawk, Marshawn Lynch, and his brand, Beastmode, to create a new clothing collection.

When she graduated from college less than a decade ago, social media influencers didn’t even exist. Now, Kayce Kirihara is getting paid to repost her sneaker collection, dye her hair blue, and interact with professional athletes.

“I have just been blessed,” she says, “that this is something I could call my job.”

Benjamin Simon is a contributor to SLAM. Follow him on Twitter @BenjaminSimon05. Additional reporting by Camille Buxeda.