We chat with photographer Ryan Nicholson, who uses timeless stills to tell the story of Ladies Who Hoop. 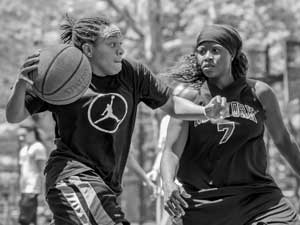 This story begins on the sidelines of Goat Park’s basketball court in New York City. It’s summertime. Former high school and college hooper Ryan Nicholson from Kansas City, MO makes his way there in a pair of jeans and no ball. Instead, Ryan holds a camera. More than a decade after making photography his profession, he realized he hadn’t shot hoops—with a camera that is. He’s got the J down.

In between photographing environmental portraiture for ad agencies, magazines and the like, Ryan seeks out untold or overlooked stories. He’s the type of guy who’ll take pictures of people square dancing or men who’ve been drinking coffee together for decades.

“I’m trying to help tell people’s stories, and for me personally, it’s really rewarding when [the story is about] somebody that normally isn’t given attention to,” he says.

As he soaked in the vibe of Goat Park’s basketball court, the unique story he came for arrived—Ladies Who Hoop claimed a court for themselves. This women-only streetball run was about to begin, and Ryan had his camera ready.

He recently finished a month-long series on his Instagram, in which he posted one photo per day of the Ladies Who Hoop. SLAM talked with Ryan about his project, which can be seen in part in the gallery above and in full on his website.

SLAM: I read you got started with photography because of your dad. Can you talk a little about what aspects drew you in?

Ryan Nicholson: I’d always been around photography with my dad, who worked as a photographer—growing up in a house that had a darkroom in the basement, cameras, going to photoshoots with him, holding reflectors, that sort of thing. But I also saw the ups and downs that career had for him and wanted a bit more of a steady income and consistent work. I graduated with a degree in secondary education and American history and was going to teach and coach basketball…that was going to be the road I went down, and I lived it for about six, almost seven years…[then] I got really burnt out was ready for a change. The last teaching job I had was actually teaching photography at a high school out in Arizona, and it really rekindled my love for the medium. I found that I was the one staying after school, printing in the darkroom, using some of the equipment to get freelance jobs. At the end of that year, I decided if I was ever going to try to make a career as a photographer, this was the time to do it.

SLAM: What inspired you to do this particular series, of the women streetballers?

RN: I played high school and college basketball, but for whatever reason, I never really shot it in the 12-plus years I’ve been working as a photographer. I watched this documentary Doin’ It In the Park, and afterwards saw it had a Facebook page. I went to the Facebook page, and it linked to this Ladies Who Hoop group. I dug down into this wormhole a little bit, stumbled onto this group, and knew I was gonna be visiting New York City in the summer. I sent a message to the curator…and she sent a message right back saying come on out.

There’s a lot of different reasons it interests me. First and foremost, I love basketball. It’s been a big part of my life, and I wanted to finally start shooting it—but I also wanted to shoot it in my own way. One of the things I love about photography is that it’s my window to get out and meet interesting people, and this group was definitely interesting to me. I’m the dad of two young girls…I love projects that allow me to show women in particular, in a manner that is strong and powerful and athletic. So [Ladies Who Hoop] hit the mark on a number of different levels—they’re an interesting group, it’s basketball-related, and it’s women.

SLAM: It seems from the photos there was a broad range of women involved, different age groups and different backgrounds?

RN: One of the things I love about sport is it brings together people from a variety of different backgrounds. I know my life has been enriched by meeting [my former teammates] and getting to know them, having friendships with people who didn’t grow up in the same manner as I did. That was another thing about the piece that was really rewarding to see—that basketball was obviously doing that [for these women] as well.

SLAM: What did you learn from the women that were there, or was there anything that really struck you while watching and photographing them?

RN: There’s a lot of things. I really felt like they played the game the right way. They played with pride. They played hard. They competed against each other. But at the end of every game, they shook hands. There was obviously some sisterhood amongst the girls who play. The thing that I would say I learned from it is if you are doing something you love and enjoy, there are other people out there who love it and enjoy it too. These ladies obviously love basketball. Some of them—I overheard conversations of coming all the way from Brooklyn—made a significant effort to get there and come and play. You would not think there’d be a huge group of women streetball basketball players, but they found each other. I think that’s pretty cool…whatever your little niche is, there’s probably other people out there that are into it. We’ve all got our family, so to speak.

SLAM: Why are the photos in black and white?

RN: Initially, I wanted to run them in color. That was a difficult decision for me, honestly. I went back and forth a number of times. Ultimately I felt like in black and white, you focus more on [the women]. You weren’t as distracted by the color of whatever shirt they were wearing, and it just made it a little bit cleaner and more focused on where I wanted people’s attention to be. One of the things I was hopeful that I could do with the piece is—and this kind of goes back to what I was talking about earlier—create images particularly of women, where they’re strong and powerful in a manner you would normally see men photographed.

SLAM: You mentioned you played some basketball in high school and college. Can you talk a little bit about your experience?

RN: I was really blessed. I played at Raytown South High School—which in Missouri and in the Midwest, particularly during the time I was there—was a powerhouse. My junior year we won the state title, and we had two guys that were Division I players. I was never the star player or all-state or any of those sorts of things, but I was good enough to eventually play at Oklahoma City University. I was there for three years and we were lucky, blessed, talented enough to win the national NAIA Division I title in ‘94 and ‘96. I was a reserve player, blessed to be a part of a really successful college program. That’s a real brief description. I was always a pretty good outside shooter. I always tell people the 3-point shot helped pay for my college education.

SLAM: Very cool. Is there anything else we should know?

RN: It’s one of those things…I didn’t know exactly what I was gonna get going in to [Ladies Who Hoop]. It’s been a fun ride, and I’ll just continue to see what develops. I’m always on the lookout for the next thing I want to go shoot, whether it’s personal work or assignment work. Hopefully, I can continue developing work in this regard, whether it’s specific to this group or not. I do know if I get back to New York and they’re playing, I would go and hang out and shoot them some more, for sure.