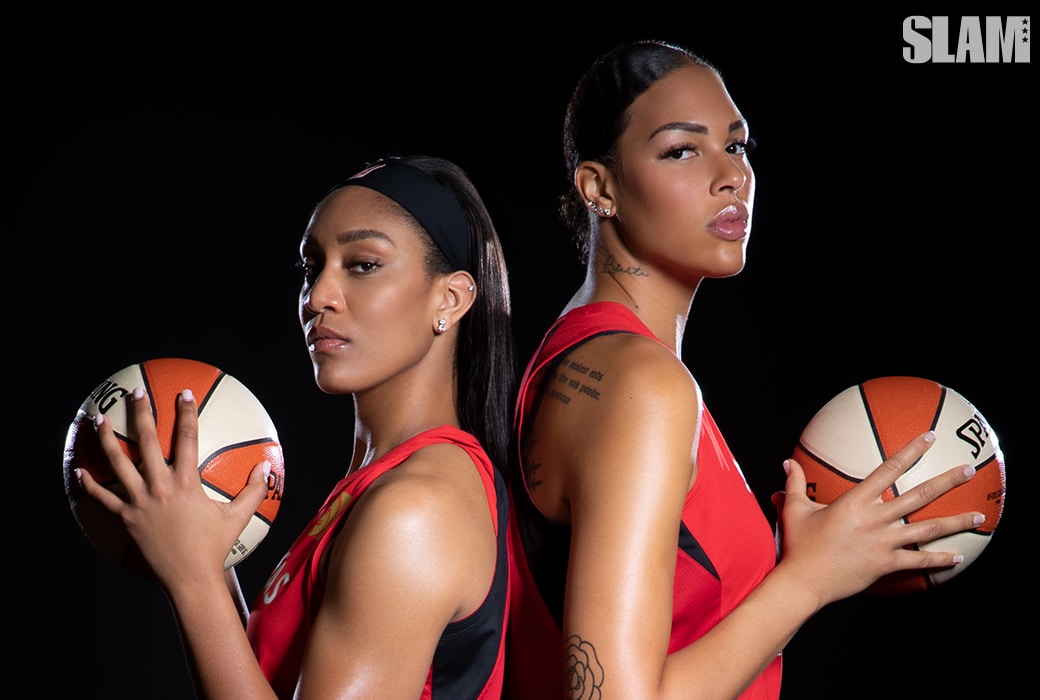 When the Las Vegas Aces acquired All-WNBA center Liz Cambage in a mid-May trade, A’ja Wilson couldn’t help but think about championships. And why not? Wilson, the reigning Rookie of the Year, and Cambage, last season’s MVP runner-up, are impossible to guard on their own—let alone together. The Aces were entering Year 2 of a three-year plan to bring a championship to Vegas. By trading for Cambage, they were able to instantly accelerate their progress on that timeline.

“My initial reaction was, OK we’re winning a championship, that’s it,” Wilson laughs. “That’s the second-year player in me that was just like, Alright, bet, automatically going to the playoffs. But that’s who I am. I’m a competitor.”

Fast-forward one month, Cambage and Wilson are inside UNLV’s Cox Pavilion for their SLAM cover shoot. They’ve played all but six games as teammates at this point, but judging by their chemistry, you’d think they’ve known each other since childhood.

In many regards, Wilson and Cambage are a perfect pairing for their larger-than-life WNBA city: two megawatt personalities, with all-world games to match. It’s no surprise that both players are ultra comfortable in front of the lens. When the playlist hits City Girls’ “Twerk,” Cambage and Wilson momentarily turn up to the music and erupt in laughter.

They’ve both appeared in the pages of SLAM before—dating back to when they were teenagers. Since then, they’ve gone from prodigies to two of the most dominant forces in women’s basketball. Now, they’re about to become just the third and fourth women to grace the cover of SLAM. Cambage and Wilson are not taking the moment for granted.

“It’s insane. I remember SLAM did a little piece on me back in Australia, […] and now I’m on a cover,” Cambage says. “It’s just showing you where the women’s game is going and how much more respect and love for the game there is now.”

The duo keeps things light and fun off the court. They have a natural ability to light up any room, and yet are as approachable as any superstar athlete. Once the whistle blows, though, the Aces stars patrol the court like an EF5 tornado tearing across an open countryside. Fiery competitors, Cambage and Wilson play with their emotions on their sleeve.

“You normally see us on the court, we’re yelling or screaming or really intense,” Wilson says. “But when you really get to know us just, like, from stretching in practice or just hearing us talk, it’s just like, Y’all are crazy. We’re funny. We’re down-to-earth people. I think people don’t really notice that.”

With just her on-court demeanor, Cambage is able to intimidate some opponents before the ball is tipped. Last July, she broke the WNBA’s single-game scoring record when she dropped 53 points against New York. She led the W in scoring (23.0) and finished second in rebounding (9.7) last season. Off the court, the 6-8 Australia native is passionate about music and fashion. She hit the decks at Coachella in April and has plans to DJ a few parties in Las Vegas during All-Star Weekend.

“Liz’s game is just so powerful. It’s very, very hard to stop. Not just only because of her size but because of her demeanor, the way she carries herself on the court,” Wilson says. “She kind of punches you in the face before you even play her, before you go up against her.”

After leading South Carolina to a national championship in 2017, Wilson was named the consensus 2017-18 National Player of the Year and was drafted No. 1 overall by the Aces. In just her first WNBA season, she averaged 20.7 points and 8.0 boards—one of the most statistically dominant rookie seasons ever. Combining quickness, power and skill, she’s built for today’s fast-paced game. A sneaker junkie, Wilson has turned the heat up a notch this season, becoming the first player—NBA or WNBA—to wear the Nike Adapt BB MAG.

“This is her second year, and she plays like a vet. Even her rookie year, it didn’t look anything like a rookie year,” Cambage says. “She’s just so dominant, and she’s just getting started.”

They’re the leaders of a young and talented Vegas team that features the last three (!!) No. 1 picks (Kelsey Plum, Wilson and Jackie Young) and one of the league’s top bucket-getters in three-time All-Star Kayla McBride. It’s no wonder that, after last May’s blockbuster trade, WNBA GMs pegged the Aces as the favorite to win the title.

“We have a lot of weapons that you can’t just focus on one thing. If you focus on one thing, then we’re just going to try to utilize all of our other weapons,” Wilson says. “We’re young, but at the same time, we’re smart. And we have so many different things that we can pick teams apart.”

Despite the high expectations, the Aces needed some time to find their footing early in the season. Wilson and Cambage, who were No. 1 and No. 2 in usage rate last year, are unselfishly learning to play with each other. Cambage is admittedly still learning the teams’ plays. And both sustained injuries while playing overseas and weren’t 100 percent to start the season. But the duo is hardly feeling any pressure. They’ve overcome significant obstacles in their lives that have given them a steely resilience that they’re applying to their profession.

During her junior season with the Gamecocks, Wilson struggled to find the will to play basketball after her grandmother passed away. But she persevered, dedicating the season to the woman who had once told her, “God didn’t put you on this earth to be normal.” The 6-4 forward finished her season by cutting down the nets after the 2017 NCAA national championship game.

“There have been plenty of times where I’ve probably been in a dark place and it was just a struggle for me, and I prayed my way out of it, and now look at me,” Wilson says. “[There] will be times when a shot’s not falling or something’s not going on. But then you look at it and you’re like, OK, how can I still produce for my team?”

Cambage was drafted to the Tulsa Shock as a 19-year-old and endured a rookie season fraught with racism, cruelty from teammates, and seemingly endless losses—including a streak of 20 straight. Every day, she would cry to her mother and agent over the phone. Unhappy with her situation in the WNBA, she would spend four seasons away from the league, eventually overcoming bouts of depression to become a mentor to her younger teammates. She became the role model she never had.

“The hardest of battles make the strongest of warriors. Without my dark days, without my hard times, I wouldn’t be the person I am today, and I wouldn’t be here,” Cambage says. “If I got drafted to a team I love, and everything went my way, and this and that, it would have never made me this strong, dominant player I am today who wants to help rookies and help the younger players and generations coming into the sport. I’m so grateful for all the hard times I’ve been through, and that’s what makes me.”

Last season, Cambage led the Dallas Wings to a playoff berth and, later, her country to a silver-medal finish at the FIBA World Cup. Pushing her body to the limit, Cambage was diagnosed with tendonitis and bursitis in her left Achilles and had to stay off the court for months. In February, she requested a trade from the Wings. Come May, the Aces had already begun training camp and Cambage was still unsure about her future in the league.

Cambage went to bed after having a going-away dinner on May 16, still not knowing when (or if) she would be traded. She woke up at 6 a.m. to find out a deal with the Aces had been finalized. Relieved, she packed up her belongings and flew across the globe to join her new teammates just hours before their first preseason game. Cambage admits that she’s still working her way into top basketball shape and still has plenty of plays to learn, but she’s happy in Vegas. Everything she wanted from a team and franchise earlier in her career, she has now in the Aces.

“From the top to the bottom—from the way that the office is run to the way we’re looked after, to the way we play—it’s the top. It’s the pinnacle,” Cambage says. “It’s where I wish the rest of the WNBA could be as well.”

It’s impossible to ignore the hype surrounding the team this season. LeBron James, Kobe Bryant, Russell Westbrook and Chris Paul have sat courtside at the Mandalay Bay Events Center. Aces players are on posters and marquees all around the city. And with All-Star Weekend heading to Vegas for the first time this summer, the Aces are preparing to host the event the only way they know how: by doubling down.

The Aces are still coming together on the court, which is scary considering that Vegas is second in the league in net rating. With the most dominant frontcourt duo in the league, the Aces could soon be racking up Ws just like many predicted. Could a championship be in the cards this season? Cambage doesn’t see anyone stopping the Aces once they hit their stride.

“They’re going to try to shut us down and double-team us, but we’re just too strong. Look at our guards. Inside-outside presence,” she says. “Once we start getting it together—like when I start knowing the plays—and really just snapping into it quickly and being able to run it straight away on the court, I think we’re going to be unstoppable.”