Does WNBA MVP Maya Moore remind you of another No. 23? Us too. 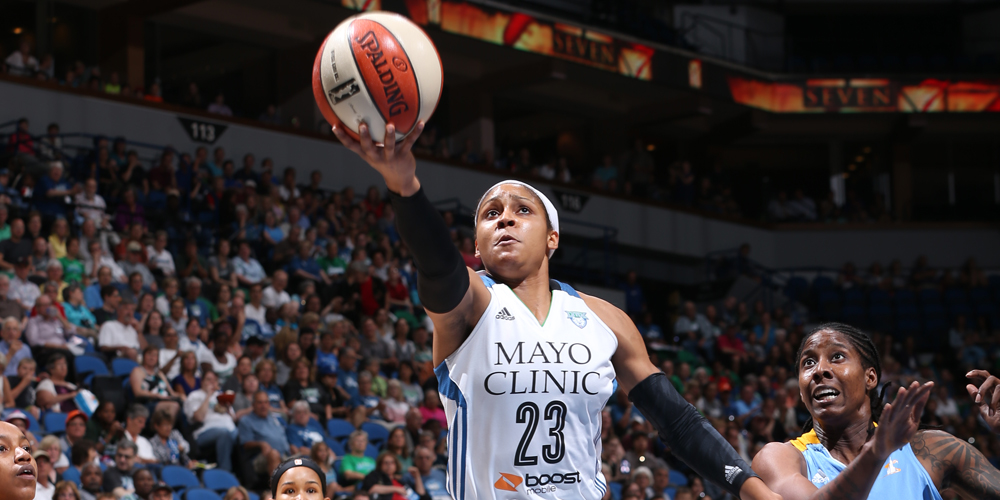 With a second left before halftime, Maya Moore catches the ball and drains a long three. She’s mad. Not the angry, flustered, emotional kind of mad. After all, the fourth-year pro rarely breaks her poker face. Rather, she’s the driven kind of mad. You know, the usable kind that leads to action.

It’s late June, and the visiting Minnesota Lynx had a weak half against the bottom of the pack L.A. Sparks. After she hit that shot to the end the quarter, Moore pounded her fist so hard you’d think she hit a Game 7 overtime buzzer-beater. She looked down at the floor in a private moment to herself, then up at the basket. A collective hush filled Staples Center.

Everyone could feel it—Maya was about to go off after the half. And she did. Moore came out of the locker room and exploded for 10 points in the first four minutes of the third and had 31 after three quarters. By the time the game was over, the Lynx were up by 17.

There’s not much defenders can do when Moore is in that frame of mind. The 2014 WNBA MVP set a league-record for most 30-plus point games this season with 12, breaking the mark of 10 set by Diana Taurasi in 2008. The same Taurasi whose 31 points in a win-or-go-home Lynx-Mercury playoff game ended Moore’s season days before we went to press.

Still, the gifted Moore has reached a point in her career where being in the zone isn’t a short-term experience; it’s a continuous, 40-minute state. Scoring 30 is no longer a novelty, but a normal part of her day.

Moore, the first female basketball player signed to Jordan Brand, has lived up to the hype since she came into the league as the No. 1 overall pick in 2011. After leading UConn to two rings and winning two more with the Lynx, the 2013 Finals MVP raised her game to an entirely new level this season.

Named a team captain for the first time, Moore captured the league’s scoring title with a career-high 23.9 ppg on 48 percent FG, to go along with 8.1 rpg, 3.4 apg and 1.9 spg. By cutting out sweets and building up endurance in the offseason, she’s been able to play the most minutes of her life at 35 a night.

Since torching the Shock with 40 points and the Dream with 48 (second-highest in WNBA history), Moore has proven to be one of the league’s most versatile scorers, dominating wherever she chooses.

With quick agility, she’s constantly cutting and moving without the ball. Sometimes she’s catching the ball on the wing for the three and other times she’s calling for the lob down low. You can find her rocking her defender left, then right, then fading away for a runner off one foot, or attacking the rim with a single dribble. She’s always fighting for position inside to get the offensive board.

It’s hard to put a body on someone whose body doesn’t fit into a neat category of guard or forward; someone who, at 6-feet and 176 pounds, can break you down just as well inside as outside.

“There’s not a player in the league that I can think of, one-on-one, who can effectively stop her,” says Husky-turned-broadcaster Rebecca Lobo.

Moore broke Minnesota’s franchise record for single-season points with 812. She holds the game in her palm, and yet Moore wants more.

“I do feel like I have a really good rhythm, but I’m definitely not satisfied,” she says. “There’s some games where I haven’t been as consistent, at least from the three-point line. There’s still shots that I wish I could get back because I’m missing shots that I usually make.”

This is why Moore’s driving into the territory of the greats—because she has a different yardstick for success. We see makes; she sees misses. We talk about her 40-point games, she talks about poise, growth and team play.

“I’m not driven by numbers,” Moore says. “It’s driven more by how I play the game and how we play the game as a team. There’s so many things that can’t be written down, specifically in striving for excellence individually and as a team.

“The numbers are going to be the numbers at the end of the day, but if we don’t feel like we’ve competed in every aspect that we’re capable of competing in, that’s how I measure how well I’m doing, and that’s the fun of it, you know you’re never done,” she says.

That mindset of never being done is how she’s turned her weaknesses as a rookie into her biggest strengths as a vet this season. Take defense. She now has the lateral speed to cover guards just as well as forwards her own size. Ballhandling? She doesn’t hesitate to take anyone off the dribble anymore. Attacking? She’s getting to the charity stripe more than ever.

And yet by the end of this season, she’ll probably still have a list of things she wants to perfect.

“The great thing about Maya is, much like Michael Jordan when he played, there is such a burning inner drive to be the best, that Maya doesn’t see herself as a player who has peaked, with nothing to learn,” says Lynx coach Cheryl Reeve. “Even though she’s young and accomplished a lot, there’s still more she can do.”

Moore rarely talks about those accomplishments. You try to ask her about herself and she credits her teammates and her coaches. Her dominance is unique; she’s been able to take over games without taking away from her teammates.

Some crumble in the moment and others never get there, but Moore lives for the postseason. From the high school, college, pro, international and Olympic levels, winning is in her blood.

Even President Obama joked last year that there’s a “Maya Moore wing” in the White House, complete with a toothbrush, for her frequent championship visits.

“There’s a lot of great players that are playing in that league, that have never accomplished anything and everybody says are great players,” says Moore’s former college coach, Geno Auriemma, about the WNBA. “This is her fourth year, and all three years her team has been in the Finals. And they’ve won it twice. So not only is she able to be a superstar individually, she’s able to elevate her team to the championship level, and that’s ultimately what defines your greatness.”