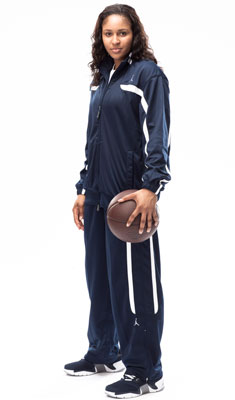 Despite my limited women’s basketball knowledge, I am well aware of who Maya Moore is.

As I walked into a Manhattan hotel to interview Moore, I was admittedly feeling a little anxious. It’s not everyday that you get to meet one of the greatest basketball players in the world, as well as someone who would undoubtedly leave my ego shattered after a game of one-on-one. As we sat down for breakfast, I was immediately impressed by her laid back demeanor, infectious personality and approachability…I mean, this is arguably the best women’s player on the face of the earth, so she would have every right to be a little big headed and dismissive of a lowly writer such as myself. But that wasn’t the case.

Maya’s humility and self awareness were evident. She even cleaned up after herself when she was done with her meal instead of waiting for our server. In the short time I spent with her, it was obvious that she was grounded and knew that she wouldn’t be in the position she is in today without the help, guidance and support of other players, coaches and her inner circle.

Over the past four years, Maya has become someone many young people look up to, but this is nothing new to her. This has been a role she has embraced before she ever reached superstardom, when strong values resonated during her childhood: “I’ve always considered myself a role model. Part of that is from how I grew up. I was an only child, but I grew up with a lot of extended family and young cousins around me so I was always like the big sister. Even when something wasn’t my fault, it was my fault: ‘You should know better.’ You have to set the example for the younger kids, so it’s something that I’ve had naturally from growing up. I knew that I needed something to look up to and I had the WNBA, I had college, I had access to a lot of older players I looked up to. I love being someone for both young girls and boys to look up to.”

Maya’s success has been staggering. In the five months since she closed out her legendary career at UConn, she has been the No. 1 pick in the WNBA Draft, won Rookie of the Year, played a major role on a championship team and became the first female basketball player to sign with the Jordan Brand—feats many athletes spend their entire careers attempting to achieve.

Despite so much personal success, Maya is quick to credit those around her, especially her Minnesota Lynx teammates and coaches, as the keys to her triumphs. “I know how many valuable pieces were already in place when I came to this team,” she says. “I came in right when everything was settled. Our starting center, Taj (McWilliams-Franklin) was a key vet for us, having Seimone (Augustus) healthy, plus all of our bench players were contributing. It was a combination of all of that. Plus, I got to come in and bring my energy and competitiveness and make big plays when I can. I realize the value I brought to my team, but it certainly wasn’t all about me. I think that’s always been the key to my success. I’ve always had great players and competitors around me from the coaching staff down to the last player on the bench.”

If Maya continues on this path, she may go down as one of the most successful basketball players ever, regardless of gender. Let’s not forget that she is only 22 years old and just graduated college in May, so she’s just tapping into her wealth of talent and potential. Granted, she still has a ways to go and is sure to encounter her share of ups and downs throughout her career. But, by signing to JB, she has surrounded herself with some of the greatest athletes in the world, and will no doubt benefit from their years of experience and knowledge.

“It shows me how much potential I still have,” Maya reflected. “Me being so young and just getting started in the pro game to have those types of competitors as part of my family now just makes me excited to learn and to break new barriers in the women’s game and in basketball in general. It’s very humbling but that’s how I’ve always been successful. By surrounding myself with great people and I’m just thankful that I’ve been given another opportunity to be surrounded by the most successful people in sports. I was just talking with my agent the other day, [and] she said, ‘It’s only been five months [since I graduated].’ I’m just excited about the possibilities I have with this brand and their gear, but even more so on the court.”

While some players would be content with a level of success similar to Maya’s, she has no plans of stopping now. It’s incredible that someone who has achieved so much already still has a lengthy career and further success ahead of her. Regarded by many as the greatest women’s player in the world, I took this opportunity to ask about her thoughts on that claim: “I think I have a long way to go,” she said with a smirk. “There’s so many great players out there but I’m definitely striving to be. It’s an exciting time and I’m still so young, just gotta keep getting in the gym and working on my game.”

With a phenomenal overall game, a humble attitude, a strong support group, and now the Jordan Brand behind her, the sky truly is the limit for Maya Moore.