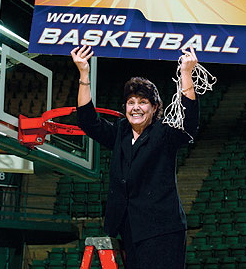 So I was trying to figure out the next coach and school to write about and then realized that I didn’t have to look any further than my own backyard. I mean, why not write about a school that has 3 National Championships (79’ 80’ and 85’), 3 Sun Belt Conference Championships, 16 CAA Championships and 19 NCAA Tournament Appearances. Oh! And it gets better. Not only does it have a wall full of trophies but has also produced 3 Olympians, 7 Kodak All-Americans, 2 Wade Trophy winners, a Naismith National Player of the Year, 9 Conference Players of the Year, 5 Conference MVP’s, and had 13 of its members in the WNBA from 1996 to the present.

Old Dominion University has been doin’ it big for over 30 years. The unique part of this is that Wendy Larry has been a member of this family as a player, graduate assistant, and assistant coach. As the head coach, she has successfully managed to carry on the passion, determination, and winning tradition for over 20 years. Her impressive list of accomplishments entails numerous Coach of the Year Awards, 16 Championship Rings, 500 career wins, and 19 NCAA appearances. The success is long and has a lot of history: history that has changed the lives of many young women all across the world. Old Dominion has had a great impact on women’s basketball. It started on the college level and transcended into the pro’s leaving its mark as it passes through time. I asked Coach Larry to give a little insight into the Lady Monarchs and its winning tradition. Here’s what the native of Bloomingdale, New Jersey had to say:

Goody: How did you perceive O.D.U. as a player? How did it inspire you?

Coach Larry: I thought Old Dominion was a school that had great vision and that was the
result of several young administrators at the time. They believed that there
would come a time for women’s basketball on the national scene. I was
really excited to be a part of that in its growing and developmental stages.
Ironically, that vision has come to pass.

Goody: No one can imagine what’s to come. Did you ever imagine this much when you
became head coach?

Coach Larry: No, I don’t think as a coach you go into every season with an anticipation
of what the outcome will be. I think that when you begin to keep track
you find out real soon that those goals don’t become accomplishments.
It’s a day to day journey and every year is so different that you must set a
different goal each day as a teacher, as you also set goals for the
individuals in the program that year.

Goody: What’s the biggest change to take place in women’s basketball over the years?

Coach Larry: You look at the growth of the game and how exciting the media exposure
is, the attendance, and some of the advanced fundamental skills of the
young players but with that we have some unfortunate drawbacks. I
see us sometimes take on negative and relaxed attitudes in our work
ethic. Several years ago the young player use to be eager to learn during
the early stages and now there’s an expectation that there’s
something in it for them without having to earn it.

Goody: Why do females take longer to commit to a school? What are the factors
involved?

Coach Larry: The difference between the boys and the girls is that girls take into
consideration varied factors and not just basketball per say. They
look at the academics, the campus environment, the weather, housing,
and safety. There are so many circumstances that go into a female
decision versus a male. For the most part, a male would sit in a recruiting
visit and ask, do you play basketball, am I going to get better here or
can I get a good education? He will make his decision based on his
chemistry with the staff and the players.

Goody: You guys are ranked 25th in the nation. Your last appearance was in 2002. What
has been your focus to get back into the elite group of teams?

Coach Larry: First of all you’ve gotta recruit good people and you’ve gotta recruit those
who believe in a passion to work. It’s not just gamers but, people who
believe that everyday they need to continue to get better and not just on
the court but in the classroom as well. In our situation we have to choose
people who are willing to develop themselves, continue to improve and
make themselves better players.

Goody: Old Dominion is in the Colonial Athletic Association where James Madison,
Delaware, Northeastern, and VCU are your biggest competition.
Talk about how important non-conference games are to this program?

Coach Larry: I hate to differentiate between leagues. The CAA is the 8th best league
in women’s basketball and we’ve had three teams make it to the NCAA
in 2007 as well as secure rank in the top 25. This conference has made
great strides. I think that one of the most important pieces in coaching
basketball is how to schedule. You must have an understanding. I think
a lot of coaches are concerned with breaking down a players confidence
with strong non-conference games but my contention has always been
that a non-conference schedule prepares you for what’s to come. In order
to be the best you have to play the best. We have always scheduled with
the idea of competing for a national title and that will never change.

Old Dominion is a university rich in tradition and has always had a passion for excellence since back in the day when the “Fieldhouse” was rocking and the women’s basketball team led the nation in the 70’s and 80’s. In addition to drawing huge crowds, the players became household names. Nancy Lieberman, Anne Donovan, Inge Nissen, Medina Dixon, and Tracy Claxton paved the way for players like Marie Christian, Donna Harrington, Adrienne Goodson, Kelly Lyons, Ticha Penicheiro, Clarisse Machanguana, Nyree Roberts, Mery Andrade and a host of others. They opened the door to greatness for those who dare to enter and only someone who is a part of this legacy can truly understand the pride. The Lady Monarch Pride to be exact.