Quest for the Trophy 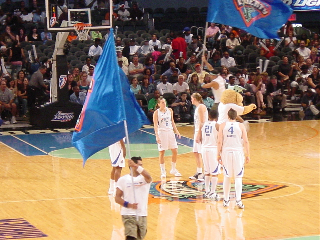 I must say, This weekend was truly hot in the WNBA. My divas were ballin’ from New York City to Sacramento, California. The new faces on the hardwood mixed in with the old made it real interesting. As I said before, New York and Phoenix are the teams that are the most exciting to watch. They simply get it done. Phoenix easily swept through Seattle and now sit and wait for the winner of the San Antonio – Sacramento series. The Mercury worked Seattle over like a bad storm. I told you that Cappy Pondexter and Diana Taurasi scare me. They score in bunches just like last night in their 101- 84 victory. Penny Taylor had 19, Taurasi had 20, Pondexter had 25. Even Coco Miller added 16.

This team has a better possibility to come out of the West than anybody because they average 97.5 points per game in the playoffs. San Antonio is second with 75.5 while Sacramento is third with 73.5. Phoenix averages 22 points more than the team next in line. If San Antonio comes out of their series against Sacramento tonight they will have to come up with some numbers and with Marie Ferdinand marinating on the bench I really can’t see it. She may not be in their plans for next year but they had better get her going this week or its lights out.

The Indiana – Connecticut series is over tonight and I will predict the Fever coming out on top. The last game was a no show for the Sun in that 78 – 59 loss. They had one person in double figures and played eleven people. A team simply cannot win shuffling all of these bodies in and out of the game. No chemistry and no flow is the result. Game One was a lot more respectable especially since it was a triple overtime win but the Sun have got to find seven players who will take the floor and ride out. When you play away from home you have to go into the depths of your soul. I didn’t see that. Tamika Catchings had 15 and 13 with a bad foot and she’s just getting warm after 6 weeks out. Anna De Forge is averaging 28.5 points against Connecticut in this series. It’s time for someone to show some pride and lock her down. Defense really needs to be the priority and not who will be the next rising star in the lockerroom. Oh! and how does Tamika Cathings get overlooked as the Defensive player of the year. I guess she will be Player Of the Year. I mean look at her numbers on the comeback. Who’s fooling who? They should give this award to the player on the ballot that is still standing when it’s all said and done.

The most exciting series right now is definitely New York and Detroit. It has been a battle from day one. New York shocked Detroit on Friday in the Big Apple. They spanked em’ 73 – 51 in front of an appreciative crowd. Stephon Marbury sat up close and center enjoying the game as much as everyone else. He really does support the WNBA and we love it. On the other hand, Detroit was not too happy with themselves after the game and the locker was filled with the tension that only a loss can bring but they showed up for Sunday’s game ready to play. They won 76 – 73 out-rebounding the Liberty 41-29 and had five people in double figures including Cheryl Ford who was questionable for the playoffs. I like that Detroit coaching staff a lot. Bill Laimbeer, Rick Mahorn and Cheryl Reeve are a class act for real.

Half of my prediction is true so far. Phoenix is in the Western Conference Finals and now San Antonio has got to get a win tonight to fulfill the prophecy. As for the East we shall see. Indiana is preparing for a victory and could be the first team in the Eastern Conference Finals but who they will play is up to Detroit and New York. Stay Tuned my good people…….