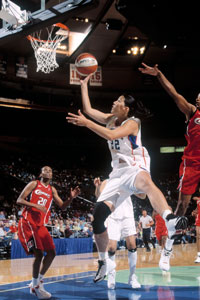 Lindsey Yamasaki’s path to the Academy of Art University in San Francisco athletic department is peculiar. First she steps into an elevator in the school’s lobby and gently coaxes it to ascend. When she steps on to the sixth floor, there are offices on her right and left. Yamasaki instead chooses a door in front of her that leads to the roof.

Outside, San Francisco skyscrapers tower and pigeons and gulls lazily stretch their wings in the sun. Yamasaki crosses the roof with long confident strides, entering a door on the opposite side. On her right is the athletic department.

Inside, Dr. Jamie Williams, the school’s athletic director, is sitting at a table with a male basketball recruit. Dr. Williams is jovial, an instant friend to anyone he meets. A smile stretches across his face upon seeing Yamasaki enter and he points the recruit in her direction. “And this,” he says with pride, leaping to his feet and pausing for dramatic effect. “This is the amazing Lindsey Yamasaki, our womens’ basketball coach.”

Losing is never easy, especially when you’ve lived a lifetime of winning. In high school, Lindsey Yamasaki won four state championships and three consecutive USA Today national championships in 1995, 1996 and 1997. From there she went on to Stanford University, one of the elite womens’ basketball programs. She ended her playing career after a four-year stint in the WNBA.

Now she is the third-year coach for the Academy of Art Urban Knights,

a program in its third year of existence. A program Yamasaki is crafting like one of her players might assemble a sculpture. But losing is a growing pain for any new program and Yamasaki is feeling those woes.

“I’m ready [to win] now and I think the girls are, too,” she says. “We have to get these players to believe in what we’re doing. First and foremost we’re a family and a team. I do feel our players love the program, love each other, love the school. The next thing we need to do is start getting some wins.”

The Urban Knights are 2-6 eight games into the ‘10-11 season. But heading into the holiday break Yamasaki may have seen a turning point where her players take ownership of their team, take responsibility for pushing the program to the next level. After losing an overtime battle to Humboldt State University, her team came back the next day and defeated Cal State East Bay 66-56. “I knew how defeated [the team] felt,” she says of the overtime loss. “I could see it in their eyes. They were angry and decided they were going to go take the win. I need to see more of that.”

Yamasaki points to her two seniors—both international players—as the team’s cornerstones. Australian forward Jessica Nolan (10.5 ppg, 10.3 rpg) brings a Euro-style game to the team. “She has the feel for basketball,” Yamasaki says. “She has the vision. She is comfortable with the ball. She’s very good at reading and understanding flow. Not to mention she’s a great scorer and has been a great rebounder for us. She’s really fun to watch.”

Verity Peets (11.5 ppg, 7.3 rpg), a forward from Stockport, England, has provided the team a boost from the bench. “Her biggest thing is confidence,” Yamasaki says. “We decided to bring her in as a sixth man because we felt like there was less pressure on her and she has flourished. She just attacks. She’s been excellent for us offensively. We’re working with her on shutting people down because physically she’s a beast.”

Yamasaki is equally excited about the contributions from the program’s heirs: juniors Nicole DeRosier (10.6 ppg)—a guard she calls “a stone cold shooter”—and Devin London (11.1 ppg), a point guard Yamasaki feels doesn’t realize how good she can be. “She can shoot. She can take it to the rim. She can pass,” says Yamasaki. “It’s just a matter of kicking it into high gear. She’s done that the last couple games and has taken responsibility on both ends.”

Through her first two seasons as coach the Urban Knights are 16-37, a far cry from the legacies Yamasaki has been a part of. But each year the team shows progress, and the coach feels the culture needed to win is in place. No university is going to give an art school a victory, she says. The team will have to take the win fro

m their opponents. “I think [the team] is ready,” she says. “It’s just a matter of drilling it into them that they are capable [of winning] and they deserve it and it’s their time.”

The path to coaching

When Lindsey Yamasaki retired from the WNBA after being cut by the Seattle Storm during training camp in 2006, she told a friend, “I don’t ever want to be involved with basketball again.” But after years of being an athlete, Yamasaki struggled to adjust to life away from sports. “I felt like someone who had just left college,” she remembers. “I was so ill-prepared for the real world.”