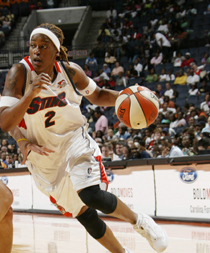 Yes, Sheri Sam is the Fever’s newest star and yes, she has established herself among the top scorers in the league’s history but there is so much more. Sheri was also one of the best players to come from the American Basketball League shortly after it ceased operations in 1999.

I wanted to talk about the things that make her unique, the things that set her apart, and so here it is: In the eleven years of her pro career, Sheri has played for seven teams. Three are now defunct, but through it all, she managed to accomplish All-Star status and a WNBA Championship ring with the Seattle Storm in 2004. It was a long road but well worth the journey. As we laughed about our recent memories of the Charlotte Sting so many questions came about but most of all, answers to what the heart of a champion really is. Here it goes:

Goody: How has your mentality changed coming off the bench on such
a deep team?

Sheri: It’s definitely an adjustment because I’ve never come off the
bench before in the WNBA, but when I get in the game it’s all
about playing basketball. I have spoken to people who come
off the bench and are successful to get a better perspective
and it’s just a mentality. I watch the game and see what needs
to be done. It’s an adjustment, but when it all comes down to
it, winning is the most important thing.

Goody: How would you compare Indiana this year to the Storm the
year you won the championship?

Sheri: That’s a good one. I’ve thought about that and we have a
similar team. We have a great bench and a great group of
girls. Everyone is comfortable with their role and want the
same things. We have a selfless star in Tameka Catchings.
Once you have that in your top player it makes it easier for
the supporting cast.

Goody: You have been blessed with the opportunity to play with
Jennifer Azzi in the ABL, Sue Bird in Seattle, Dawn Staley in
Charlotte, and now Tully Bevilaqua in Indiana. Briefly talk about
each one.

Sheri: I’ve been blessed to play with some great point guards and
I gotta go a bit further to mention Debbie Black and Sonja
Henning. I played with Jen Azzi in San Jose when I was fresh
outta college. She was very accepting of me and taught me
how to prepare for the game mentally and physically. Sue Bird
is a young player but at the same time very gifted. I was kinda
tutoring her but she knows the game and will be regarded as
one of the great players in the league when its all said and
done. Then you have Tully, and man is she the prototype player
who does what needs to be done whether its diving on the
floor, taking a charge, or just playing hard. She leads by
example doing whatever it takes to win like Debbie Black.
Debbie was tough, she taught me how to prepare for
the game mentally and to be a leader. I haven’t even
mentioned Dawn Staley and though my time with her in
Charlotte was brief I learned a lot. I watched how she would
handle each situation differently. She was so professional
and took care of her teammates. I’ve learned so much from
several Hall Of Famers and I’m very thankful for that.

Goody: How have you handled all of the changes and dispersal of
several teams like Miami, Orlando, Charlotte, Cleveland,
and Utah.

Sheri: Its been tough. I have played for six teams and three of them
no longer exist. The ABL was huge for me and the start off my
career. It was like a family over there and when it folded I was
like “Whoa!” I really thought I had found a home in Miami in
the WNBA. I had some of the best moments of my career down
there and to think it could happen again was not on my mind,
but I was blessed to be able to still move on and fortunate
enough to be a major contributor to the success of all of the
teams I played for.

Goody: What do you feel you can bring to this young Indiana team?

Sheri: Oh! Just my experience, overall competitiveness, and my will to
win. I stay after them and pick them up when things get hard.
I’ve always wanted to be a leader and I fit that role here in
Indiana. I’m at a point in my career where I feel like I can
share a lot with the young players and help us get to the next
level, get a championship.

Goody: What do you want to do when it’s all said and done?

Sheri: I want to give back. There’s a lot of athletes in my hometown
Lafayette, Louisiana who don’t have the resources or haven’t
seen what they can become through a sport. I want to start
a program called “Training For Success” which will supply the
avenues and resources to help them realize their dreams.
There is plenty of opportunity, but if the way isn’t presented
to them how will they ever know? This is definitely one thing I
will do for the youngsters where I grew up, but that’s after
another championship, as we laugh.

Thank you to all of my WNBA fans who posed questions and made
this article possible. One love to my peoples. Only God knows how
the 2007 WNBA season is gonna end but I have a gut feeling that
the Indiana Fever and the fat lady will sing a few bars when its all
said and done. I’m just saying. I’m just saying……