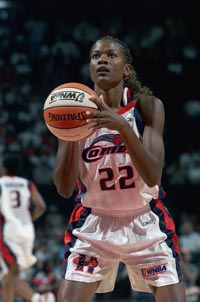 I suppose you could say I’m an anomaly. I’m a guy, I have two full arm-sleeves of tattoos, I’ve played basketball at a high level, and I write about the WNBA for SLAM Magazine and SLAMonline. As shocking and bold as some people think it is, I support the league and want it to thrive; I think its significance in society is both largely undervalued and under-appreciated.

But I’ve said all this before. Here, here, and here.

So how do I respond to articles that liken the WNBA succeeding to a cell phone walking to the refrigerator and grabbing a Yoo-hoo? Better yet, should I respond?

Haters like Jeff Pearlman of SI.com have made their case before so his article in SI.com today is nothing original, nothing new. You could substitute the writer’s byline with dozens of others who have said the same exact thing over and over again. Maybe not to the extent of comparing the WNBA succeeding to “dogs speaking fluent Spanish” like Pearlman does, but it’s happened before. And it’s tired. And ignorant. And, unfortunately, not surprising.

But wait! Pearlman even got a quote from SLAM writer, Russ Bengtson! Validity = enhanced, right?

Maybe the most ironic part to me is that he chose to write this a mere 36 hours before Game 7 of the NBA Finals. Why? What is the point of that? I didn’t write an article on how horribl

e the AFL is the day before the Super Bowl. The fact remains he knowingly wrote and posted this when he did. This leads me to assume his thought process was as follows…

Man, the NBA Finals have been great this year. What a fantastic match-up between such storied rivals. This makes me think of how much the WNBA sucks. I should write an article about how worthless I think it is. Oh, and I’ll get a quote from a writer at SLAM for credibility.

If you knew nothing about the league, Pearlman presents a solid case not to watch it. Here’s a shocker – he says Tamika Catchings will never be Carmelo Anthony (which is a poor comparison anyway). He compares the likeliness of the WNBA succeeding to dogs speaking fluent Spanish and penguins playing Mahjong. Yes, it’s as narcissistic and arrogant as it reads.

But we’ve all heard it before.

Bashing the WNBA generates pageviews. People who don’t want the league to thrive will read it and laugh at the punch lines (even if they’re not funny, as is the case with Pearlman). Others who support the league will read it and become incensed. It’s a win-win situation for the writer. After all, I’m writing this response to Pearlman which will give him more views on his SI.com page, right? Even more ironic, Pearlman uses a quote from Debbie Schlussel who is about as biased and ignorant as they come in terms of WNBA detractors.

If I’m honest, it’s a lose-lose situation for writers like myself who cover the WNBA. If I respond, I’m generating more hits to his page and will probably come off as defensive or that I can’t take a joke. If I choose to ignore it, it’s almost like I’m accepting the misogynistic views like I’m okay with it.

I could let Pearlman know that compared to the NBA in its first couple of decades the WNBA is leaps and bounds ahead. I could cite the growing media presence at WNBA games and on the web but he would just throw out how infantile the numbers seem to the NBA. I could reference the attendance numbers in the last couple years as great signs for future league growth. He’d still respond with a laugh. What if I told him the WNBA is actually more profitable than the NBA? Would he believe me? Maybe I could go for a more humanistic approach and state how much the WNBA does for their surrounding communities or the example they set for young women. He’d shake that off and tell me it doesn’t matter.

Even as I’m writing this, I’ve went back and forth whether or not to publish it. I’ll probably receive more hate mail (I get about 15 a week) calling me an “idiot” (amongst other words I can’t repeat) for supporting the WNBA. The comments on this post will probably be filled with people agreeing with Pearlman and me attempting to defend my stance. In the end, it will give him the publicity he wants and the web traffic he needs.

On the other hand, if I don’t publish or respond, will articles like Pearlman’s ever stop? Should I just keep doing what I’m doing and cover the league religiously? Will that help?

I don’t have the answer. What I do know, however, is how unbelievably sorry I am for my niece that there are people like Pearlman still bringing her down as she pursues her basketball career. And I’ll keep encouraging and supporting her. I’ll continue to let her know she can achieve what she sets her mind to in spite of all the negativity surrounding her; and I’ll be there every step of the way no matter what.

I suppose that’s all I can do.