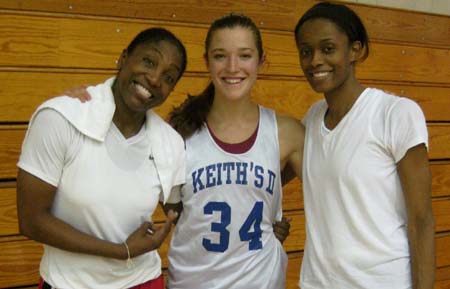 Last week I played in a pickup game with Teresa Edwards, the most decorated basketball player in Olympic history, and Swin Cash, a player with the WNBA’s Seattle Storm who narrowly missed participating in her second Games this year.

As a researcher for NBC Olympics at the New York headquarters, I’d listened to Teresa and Swin call basketball games for the past three weeks or so. Teresa spent a lot of time in the research room at our 30 Rock headquarters, talking hoop and telling stories from her playing days. She played her college ball at the University of Georgia, and went on to compete in five Olympics, earning four gold medals and a single pesky bronze—more medals than any other player in Olympic history.

But few typical sports fans have heard of her.

She was over the hill by the time the WNBA formed, and played just two seasons with the Minnesota Lynx. The bulk of her playing has been international. Over the course of nine years, she played professionally in Italy, Japan, Spain, and France, but never benefited from the comparatively exorbitant salaries and celebrity status that current stars Sue Bird, Diana Taurasi, Becky Hammon and others can find playing in Europe today. Following the Atlanta Games, Teresa helped found the American Basketball League, where she served as a player-coach for three years before the league disbanded.

In short, Teresa never made it. But neither has any female U.S. basketball player.

For the Dream Team Reincarnated, so-called “redemption” came quite easily. But nothing came easily (and no one seemed to notice if it did) for Teresa Edwards and the other women of her generation. There’s no such thing as redemption if you never got yours in the first place.

The morning of the pickup game, fresh off of a twelve-hour overnight shift at 30 Rock, I went uptown to the Harlem House of Hoop to buy some shoes.

Manhattan’s sneaker temple holds the personal shoe of just about every U.S. men’s basketball player, along with a series of platinum silver-painted figures decked out in Team USA jerseys. I watched some younger boys stare up at the silver ‘Bron and his sculpted triceps. His elevated position made him look like some kind of demigod, soaring above the consumer-mortals in his red white and blue Soldier IIs.

The salesmen laughed when I asked about Taurasi’s new Nikes.

“Nah, no women’s shoes here, not really. But we got LeBrons, Kidd’s Air Zooms, CPs, Kobes, Melos, Wade 3s, and, of course, the brand new Jordans.”

I wandered into a side showroom and cautiously approached the far wall, where a soft, incandescent light glowed from behind the shelves. As I glanced over the selection, already intimidated by the price tags, the new Nike Hyperdunk caught my eye. The company calls it the “lightest and strongest basketball shoe” ever made. One-hundred-and-ten dollars of Vectran fibers and NASA-engineered Lunar Foam that, according to the company, all comes together to “represent the future.”

I remembered that about half of the U.S. women’s team was wearing the same synthetic material in Beijing. But I guess it wasn’t a women’s shoe. The House of Hoop doesn’t carry women’s shoes.

I looked a few rows over and spotted the Air Zooms BB model. I picked it up and stroked the soft perforated black felt and thought about Jason Kidd and Steve Nash, two NBA players who both wear those shoes for a whole mess of money. Neither J-Kidd or Kid Canada were in the store, but the their personal plastic was there to represent both their exceptional talents, and the respect we fans have for them.

Plus, my too-big toes were cramping up and the new cloth was boring some nasty blisters into my ankles. F*ck these shoes, I thought, realizing that it was too late to return them. And for a second, sucking air in that no-name gym with that no-name Teresa Edwards leisurely draining threes in my eye every other trip up the court, I also thought, F*ck Jason Kidd.

Of course, that anger is misdirected. I know this. I know that none of them—Jason Kidd or the Redeem Team or the House of Hoop or Nike—none of them owe me, or Teresa Edwards or Swin Cash, a single thing. That team’s Road to Redemption has little to do with what we owe to the forgotten generation of female ballers.

Taurasi may have her own shoes, but I don’t think the House of Hoop, or any of us really, care about her sneaks. Not enough to break them in.

I’m working on breaking-in those Kidd shoes, with the help of some pre-wrap and some athletic tape, but I’ve still got these scabs hanging around. I hope they turn into scars eventually. A few battle wounds to remind me of that game with Teresa Edwards, and the games we’ll never get with the others—our long-lost, Lunar Foam-less, still ballin’ lady ballers.

Emma Carmichael is a member of the women’s basketball team at Vassar College in Poughkeepsie, New York. She can be reached here.