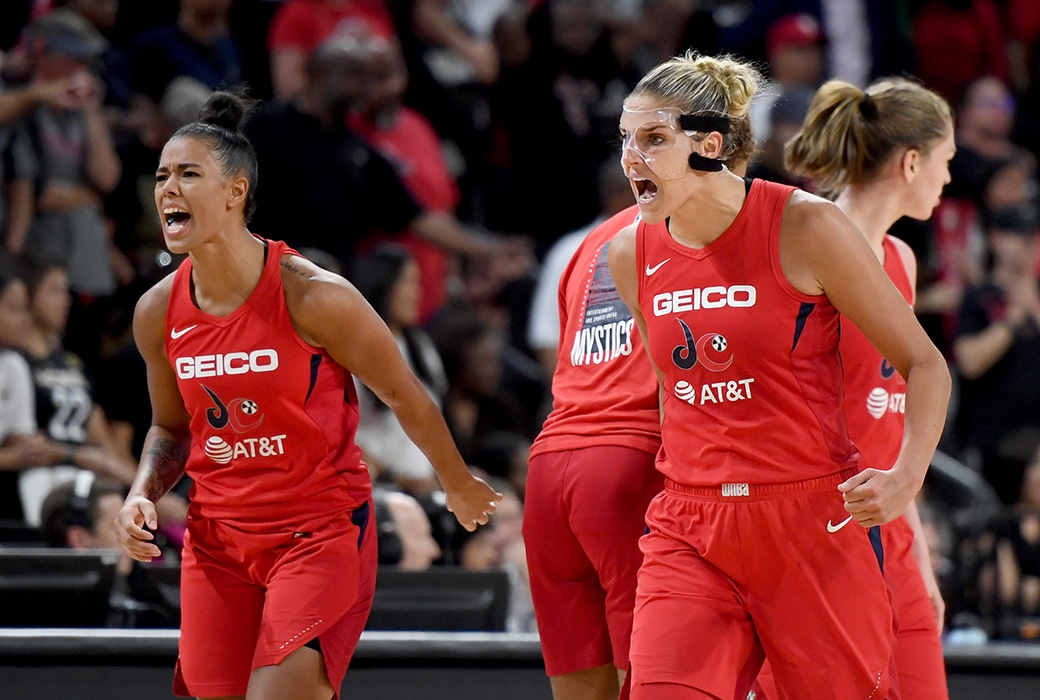 In case you haven’t been paying attention, the Washington Mystics are really good right now. Finishing the 2019 WNBA regular season as the top seed with a franchise-best 26-8 record, the Mystics have left opponents baffled with unstoppable ball movement and sharp shooting. Not to mention the team’s most dangerous weapon, Elena Delle Donne, just won her second MVP award in a historic season. But the memory of last season’s pain is still fresh in the minds of the players.

This time last year, the Mystics had just gotten swept in the 2018 Finals by the Seattle Storm.

“[Seattle] just handled us in so many ways,” Delle Donne says. “So it was kind of like a challenge. How do we get to that level next season? How do we find a way to improve so we can compete at that sort of level? And it motivated us to all kind of go get better in the offseason, work on [our] individual selves and come back hungry.”

After the loss, the phrase, “run it back,” was born. Since then, it has become so much more. Printed on t-shirts, plastered onto locker room walls and consistently running through everyone’s minds, “run it back” was adopted as a mantra that carried the team through the season and into the playoffs.

At the beginning of training camp in May, Mystics head coach Mike Thibault refused to let the players forget. He even replayed a video of the Storm celebrating the title on the floor of the Entertainment & Sports Arena.

“We were lowkey kind of hurt, but it pissed us off in a good way,” guard Ariel Atkins says. “To see somebody celebrating on your home court in front of your fans like this is a tough way to go out.”

And it worked. This season, the team showed out, winning a league-record 13 games by a margin of at least 20 points and averaging a league-leading 83.9 points per game. The Mystics have also focused more on team play, finishing the regular season with the league’s best assist record—just one year after posting the second-worst record. With unstoppable players at every position, even the Mystics’ bench is a force to be reckoned with. Players like Emma Meesseman, Tianna Hawkins and Ariel Atkins have stepped up considerably this season, seeing increased time on the floor and making the most of it.

“Everybody has stepped their game up, so it’s hard to just pick one person,” Delle Donne says. “Aerial Powers stepped up big time for us, especially with Kristi [Toliver] being out. She’s had to come in and play some huge minutes. And then obviously having Emma back has been huge. She’s one of the most efficient offensive players that this game has.”

Younger players have also had an impact on the court. In her first year in the league, Atkins was named to the All-Rookie Team and the All-Defensive Second Team. Now in her second year, the 5-8 guard is in the starting lineup and credits her teammates and coaches for helping her continue to grow as a player.

“I’m playing with Elena Delle Donne, Kristi Toliver, Natasha Cloud, LaToya Sanders, Tianna Hawkins,” Atkins says. “I got people in the gym that push me every day. I’m coached by Mike Thibault and Marianne Stanley. I’m pushed every day and I don’t have a choice but to get better by walking in this gym every day if I want to be better.”

That support follows the team off the court as well, and is critical to the family culture the Mystics have built this season. When Natasha Cloud decided to speak out against gun violence in the U.S., her teammates supported her every step of the way.

The team’s chemistry and connection is stronger than ever, in part due to the response to last year’s Finals loss. Instead of crumbling, team leaders like Delle Donne have spoken up and motivated the team to work harder and make smarter plays. But the players make sure that everyone’s voice is heard, not just the veterans.

“Even for somebody like me to be like, Hey, don’t forget to set that back screen, and for them to just take it and be like, ‘OK,'” Atkins says. “They don’t think that they know everything. So for me coming in, knowing that I’m going to be a lifelong learner, you can never finish learning this game.”

Despite all of the success in the regular season, the team has not lost sight of the goal—to bring a basketball championship to D.C. for the first time in 41 years.

“That’s what you dream of from the time that you’re little is not only getting to the WNBA, but winning a WNBA championship,” Cloud says. “I think for me personally, too, I want to win a championship for myself and for this team and this organization. But I really want to win one for Elena.”

After defeating the Las Vegas Aces 3-1 in the 2019 WNBA semifinals, the Mystics are in prime position to win the first championship in franchise history.