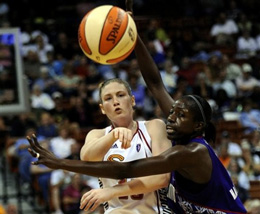 You’ve heard the story – Lindsay Whalen, the beloved Minnesota native, is coming home to play for the Lynx.

What you haven’t heard, is how energized she is.

Understandably, it’s been a whirlwind off-season for the former Sun star and it’s tricky for the reality of her new situation to set in while playing overseas in the Czech Republic. Plus, by nature, Whalen displays a low-key, grounded personality and certainly isn’t one to let fame, recognition, or success influence her.

But don’t let her cool, calm and collected presence fool you — Lindsay is thrilled to return to Minnesota.

“I’m really excited for the opportunity to come back home,” said Whalen. “You never really know if something like that is going to happen. I loved my time in Connecticut but I’m excited for the cha

llenge of coming back home to mesh with all the talent in Minnesota.”

It’s no secret that Whalen is a hometown hero; she brought newfound pride and recognition to the Golden Gopher program during their historic Final Four run in 2004. Hell, she’s the greatest women’s basketball player in Gopher history. Ever since being selected by the Connecticut Sun, Minnesota fans and followers have felt like a little piece of their heart has been missing for the previous six years.

Immediately, Whalen’s return lifts the spirits of Lynx fans; not solely because it propels them into championship contention, but because Minnesota is just…where she belongs. There are some athlete’s that just look wrong in another uniform; not because of anything they did, but because they are so connected to a city or state. Remember Karl Malone on the Lakers…didn’t that just look weird?

“My goal is to just take it one step at a time,” said Whalen. “I’m going to come into training camp healthy and in top shape and just be the best teammate I can be. It is going to be exciting to play with all the amazing talent there.”

To be fair, Whalen loved her time in Connecticut. She had some phenomenal success there; the Sun made the playoffs from 2004-2008 and Whalen was an enormous reason why. There was never a complaint after the 2004 draft tha

t she didn’t end up in Minny – those things happen and you just roll with the punches. Would it have been nice? Sure. But Lindsay, like the professional she is, made the absolute best of her situation.

“I enjoyed playing in Connecticut,” Whalen said. “It was a great time and we did some good things there. It was never something I really thought about, coming back home. I mean, it’s always kind of in the back of your mind, but you never think it is going to happen.”

Under the guidance of new head coach Cheryl Reeve, Whalen will do whatever this Lynx team needs her to do. Chances are she’ll be more of a facilitator and distributor with the sheer firepower they have; Whalen is a lot like Steve Nash in that they both have a key sense of when to take over a game, turn up their offensive output or let their teammates shoulder the load. Though, Whalen hasn’t played on a roster that features the amount of talent the 2010 Lynx have…

“It’s really about what the team needs,” Whalen said of her role on the Lynx. “I’m going to come in with an open mind and do whatever coach Reeve tells me. I think my role will be to come in as a leader and be a great teammate. Really, just to play hard and gel with the team.”

Whalen brings a quiet confidence to the Lynx and provides a steadiness that many of the younger players can turn to in pressure situations. Lindsay has always been one to effectively produce in the clutch, and that type of ability will be invaluable for a team that hasn’t made the playoffs in a number of years.

Quite simply, Whalen provides much needed stability and consistency.

It will be inter

esting to see Reeve’s mark on this Lynx team, and especially how it differs from Jennifer Gillom’s fast-paced approach last year. Reeve brings a disciplined approach from her time in Detroit and has repeatedly stated her desire for the team to improve defensively. Though, harnessing and enhancing the influx of talent on the Lynx to its best capacity will probably be her biggest challenge. Even so, it’s impossible to ignore the intangible impact a player like Whalen provides.

“I’ve received a few emails and texts from players,” Whalen said regarding her new teammates. “Seimone [Augustus] texted me a picture with her in a Saints jersey and I sent one back with me in a [Brett] Favre jersey. We stay in touch as much as we can on Facebook and Twitter. Honestly, it hasn’t really sunk in that I’ll be back yet.”

If nothing else, Whalen gives Lynx fans hope and anticipation for the future. Perhaps never before has a player’s return to her home state been so renowned and celebrated in the WNBA. Like Whalen said, the ultimate success of her homecoming will depend on the integration and assimilation of all their talent.

All basketball talk aside, the excitement is palpable in Minnesota and fans are overjoyed for the return of their lovable, hometown hero.

It’s just where she belongs. 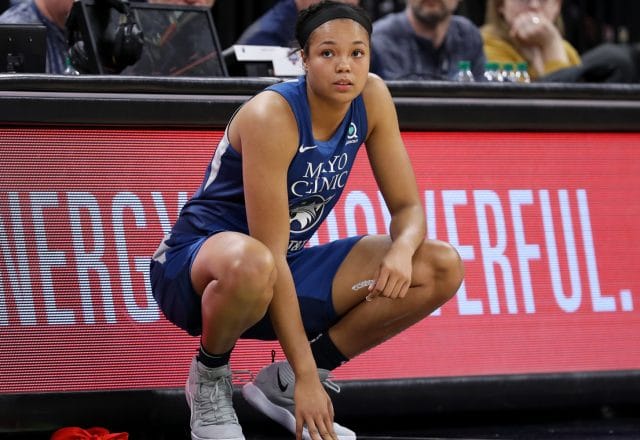