What We Can All Learn From Mike Thibault 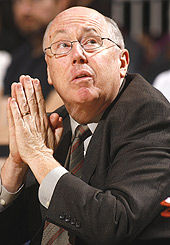 Initially, I was hesitant to ask Connecticut Sun coach Mike Thibault about his tragic family history with Cystic Fibrosis.

Not because I didn’t care, but simply out of respect and sensitivity.

“I’m not sure how to frame the question without seeming like an ignorant jerk,” I kept thinking, cynically.

After all, how do you ask someone who has had five siblings (yes, five) pass away from the vicious disease to talk about it? To relive it? Discussing any death of a family member is obviously difficult but having five siblings pass away? I can’t imagine…

Knowing the type of person Thibault is, I asked my question as sincere as I could.

“Mike,” I began. “I understand that Cystic Fibrosis has been a huge part of your life for many, many years. Can you elaborate on how it has affected you and your family?”

Thibault’s subsequent reply is something we, as human beings, can all learn from.

Cystic Fibrosis (CF) is a disease passed down through generations that causes thick mucus to build up in the lungs, digestive tract, and other areas of the body. One of the most frequently occurring chronic lung diseases in children and young adults, CF is a serious, life-threatening disorder.

Because the mucus builds up in the breathing passages of the lungs, it can cause serious breathing and digestive problems as well as negatively affecting the reproductive system. Coughing, fatigue, shortness of breath, recurring episodes of pneumonia, and lack of appetite are some of the most commonly occurring symptoms. Treatments include antibiotics, inhaled medicines, enzyme therapy, vaccines, oxygen therapy, and even complete lung transplants. Today, most children are diagnosed early on (before the age of two) and can live fairly healthy lives. The average life span for those afflicted by CF is nearly 37 years which is a dramatic increase over the past 30 years. Still, it’s a scary reality for anyone afflicted.

For Thibault, he can’t really remember a time when CF wasn’t a part of his everyday life.

“I’m the oldest of nine,” Thibault said of his family. “I’ve had four sisters and a brother pass from it. I have two sisters and a brother who are surviving and none of them have CF. My sister was the second born, the first to get CF, and she died at the age of five. I was about seven at the time. It caught almost every other kid from there on.”

Being the oldest, Thibault developed a genuine, natural sense of responsibility and obligation to help his parents take care of his siblings. Back in the 50’s and 60’s when Thibault was growing up, there had been very little research done on CF; there was no concept in the medical field that CF could be a generational disease. The mental, physical, and financial toll it took on Thibault and his parents was both strenuous and demanding.

“Life expectancy is much greater today,” Thibault said. “As time went on, the treatments have improved. Again, I had a sister die at five but then I had another sister live until 21. There are a lot of medications people can take today that will help, especially if you’re diagnosed early on. The development and funding for research is the biggest thing and progress is definitely being made.”

Thibault remembers helping his parents administer breathing and chest percussion treatments to his siblings on a daily basis to help them cough up as much mucus as possible for better air intake. This was everyday life for Thibault and his parents. Other than school and work, there really wasn’t much time for anything else.

“It’s like anything else in life,” says a humble Thibault when asked how it affected him directly. “When you’re going through it, especially when you’re younger, you don’t really think about. It’s just what you do. It’s just what is. Now, being older, I can’t imagine how my parents went through that every single day. But growing up, it’s just what you did – you had a sick brother or sister that you helped out. We were a big family so you got through it together.”

The only time Thibault remembers CF affecting him directly was when he played in a baseball or basketball game and his parents weren’t able to attend because they were taking care of his brothers and sisters. But when Thibault talks about it, there’s no remaining hurt or hard feelings; he realizes his parents couldn’t be everywhere at once and, due to his sympathy and compassion, he’d rather them be with his siblings.

“I always felt bad for them,” Thibault says as his voice becomes somber. “Both my parents and my brothers and sisters. I understood that my parents obviously wanted to be at the games but just couldn’t. That was their life, besides work. As I got older and ready to start my own family, having seen what my parents went through, I had a much greater appreciation for life when it is ‘normal.’”

Twenty-three years have passed since someone in Thibault’s family has been diagnosed with CF. But the reality and magnitude of the possibility is still there. Thibault is a carrier of CF but in order to pass it down to your children you need both parents to have a defective CF gene (his wife, Nanci, is not a carrier). Thibault says that CF is no longer something he and his family worries about on a daily basis, but they certainly are aware of it.

“I’m grateful that my kids are healthy,” says Thibault matter of factly. “My son, Eric, is a carrier but we don’t think my daughter, Carly, is. Today, my attachment to it is more with local events that I can be involved with. I don’t have the day-to-day contact like I had growing up. My wife is as involved as anybody. She’s helped chair up the teams that do walks to raise money, volunteer, help with mailings, things like that. She has been really great about it. When we got married, there were still a couple of kids in my family that still had it and she developed a connection with them.”

Back to the very first question I asked Thibault: Can you elaborate on how it has affected you and your family?

His honest, straightforward reply caught me off guard…in a good way.

“It helped me realize that I never have anything to complain about. Nothing. Whatever I have going on in my life can’t be all that bad.”

Thibault’s glass-half-full take on life, especially considering his childhood combined with the daunting world we live in today, is nothing short of remarkable.