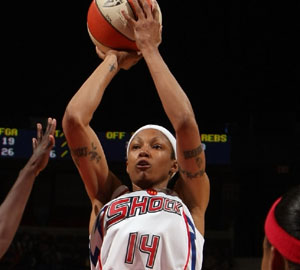 Whoa… preseason was bananas, just look around on WNBA.com, USA Today or any other sports forum and you will notice. The “Expect Great” campaign with Tamika Catchings, Cheryl Ford, and Candace Parker are constantly being played during the NBA playoffs and every newspaper from the Hartford Courant to ESPN.com are trying to predict the 2008 season. So I feel compelled to speak and give my non-political predictions.

Top of the East:

1. Detroit – is loaded and returns all of their guns. Deanna Nolan, Katie Smith, Cheryl Ford, Kara Braxton and Plenette Pierson all return as well as the addition of National Champion Alexis Hornbuckle to man the point. The bench is deeper than deep with Sheri Sam, Latoya Thomas, Tasha Humphrey and sleeper Tyresa Smith from out of Delaware. Bill and Company has put together another bomb squad. You’d better believe it.

2. New York – are a bunch of athletically gifted females and I must add that they’re quick as mustangs at the guard spot. Loree Moore, Ashley Battle, Shemeka Christon and newly acquired Essence Carson will definitely spell trouble for any defense. Jen McCarville didn’t have a problem keeping up last year and she certainly has plans for 2008. Can u say, A-L-K-A S-E-L-T-Z-E-R… A few teams will surely be upset by the Liberty this season.

3. Chicago – has returned all of their core players. Sophomore Armintie Price, Jia Perkins, Candace Dupree, Chasity Melvin, and #1 Draft Pick Sylvia Fowles guarantee to be tough but the lack of depth and inexperience will be sure to catch up in the playoffs.

4. Atlanta – Is the sleeper. They have experience and youth mixed together. This new franchise consists of : Betty Lennox, Iziane Castro Marques (who plays exactly like Leandro Barbosa from Brazil), Ivory Latta, Chantelle Anderson, Katie Feenstra, and Erica De Souza (another Brazillian). The unique thing is that Coach Meadors can play Latta when she needs to run or Kristin Haynie when she needs to set the tempo. Look out for this team they can surprise a few.

Top of the West:

1. Seattle – has a lot of big names this season. Lauren Jackson, Yolanda Griffith, Sue Bird, Sheryl Swoopes, and Swin Cash. If the Maestro Brian Agler can strum all the minds and conduct all of this individual talent, the orchestra may play nicely in Seattle. The storm just may be over. This one will be fun to watch.

2. Los Angeles – will be tough once again but remember they have to fit a few pieces together. The ideal line-up would be Temeka Johnson, Marie Ferdinand-Harris, Delisha Milton-Jones, Candace Parker, and Lisa Leslie. If they catch fire then that west coast prediction is over but they will have to go through Seattle.

3. San Antonio – has everyone coming back except Brian Agler. Veteran Helen Darling, Becky Hammon, Vickie Johnson, Sophia Young, and Ruth Riley along with a healthy Erin Buescher should make some noise out west. Hopefully, Edwige Lawson and Ann Wauters will give them a boost from the bench.

4. Phoenix – should be able to hold down the fort until the return of Penny Taylor. They are still fully loaded with Cappie Pondexter, Kelly Miller, Diana Taurasi, Kelly Mazzante, and Tangela Smith. My only concern is who will be that sixth-woman to emerge and contribute immediately. They will battle with Sacramento for this final spot.

These predictions I have made are only predictions. Injuries and trades can change things up immediately. The other teams in the league that I didn’t mention (Connecticut, Indiana, Washington, Houston, and Minnesota) all have the same record in the beginning and can wipe out my predictions but for now we’ll just wait and see.

Until next time stay peace but most of all stay tuned…