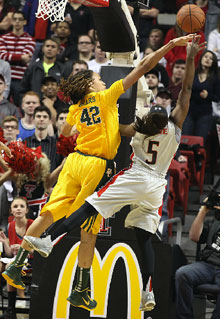 “When Brittney came four years ago I told everybody, You better buy tickets. You’ll never see anything like her again,” Baylor coach Kim Mulkey said.

It’s hard to think of a young player to have the impact on the college game like some of the Goliaths in women’s college basketball. The greats like Diana Taurasi, Rebecca Lobo or Cynthia Cooper, are put so high of a plateau it’s hard to think anyone can be as dominant as they once were. Whether you want to admit it or not, Brittney Griner has changed the landscape of women’s college basketball.

Griner may be the most exciting player to watch since Candace Parker at Tennessee. What makes Griner special is her dominance on both sides of the floor. Last week, she became the NCAA’s all-time leader in blocks. She followed that up with a 40-point performance, making her the Big-12 all-time leader scorer. To put icing on the cake, she threw down another two-handed jam, extending her all-time dunk record to 12.

I hope you’re wrong Coach Mulkey, because I love where women’s basketball is going because of players like Griner.

Baylor center Britney Griner now is in the record books as the all-time leading shot blocker. Against Oklahoma, the 6-8 center swatted 8 shots to break the record, which was held by former St. Mary’s player Louella Tomlinson. Even more impressive, is that while achieving this feat, Griner has only fouled out twice in her career. I guess breaking the all-time block record wasn’t enough for Griner, who followed up the next game with a 40-point performance, which cemented her place as the all-time leading scorer in Big 12 history.

The Huskies went seven minutes without a bucket against Villanova, and still won by 33. Either there was a huge lead going into that drought, or there was some amazing defense on display during that time period to hold up such a lead. The Huskies are one of the most dynamic teams on both sides of the floor, and balance will be a key if they will be able to bring home another Championship this year. UConn looks to continue to dominate conference play before a mid-season slugfest with Baylor in the two weeks.

Skylar Diggins plays some of her best ball on the biggest stages. Last game against Tennessee she led her team to another tough road victory, 77-67. Diggins was on fire in the contest, posting a career high 33 points against the No. 9 Lady Vols. The Fighting Irish remain undefeated in conference play, and will look to continue that trend against Cincinnati and Villanova this week.

The Blue Devils continue to dominate the ACC with their 34th straight victory against conference foes. Duke was relentless on defense last game against Boston College, forcing 15 turnovers. “Duke’s hands were so good,” said Boston College coach Erik Johnson. ”They got deflections everywhere. Our drive-and-dish game, our ability to create shots for others, was clearly disrupted.” Duke will have that winning streak tested this week against rival UNC.

The Wildcats were held 30 points under their average in a loss against No. 18 South Carolina, 55-50. Despite the fact Kentucky shot under 33 percent from the floor, they were still winning the game before a 16-4 run late by the Gamecocks. The Wildcats seemed to have learned from mistakes in their following game, with a 73-60 victory against LSU. Reigning SEC Player of the Year A’dia Mathies led the way with 15 points and 5 rebounds in the contest.

The Cardinal continues to rebound from their loss to California with back-to-back wins last week. Stanford got the win against No. 20 Colorado, but suffered a scare when All-American Chiney Ogwumike collided with a Colorado player in the game. Chiney came up hobbling and left the game to get her ankle taped, but returned to action later in the contest. Stanford coach Tara VanDerveer said she just tweaked the ankle and will be fine.

The Golden Bears continue to sweep through the Pac-12 with a victory against Utah, 71-54. Layshia Clarendon had 23 points in the contest. Reshanda Gray was on a tear for the Bears with 19 points before leaving in the second half with a hamstring injury. California will have to find a way to replace her energy down low if she is forced to miss time.

Even though the Vols were able to remain undefeated in conference play beating Vanderbilt, they suffered a small setback against No. 2-ranked Notre Dame, 77-67. Tennessee was able to take away the interior presence of the Fighting Irish by keeping Natalie Achonwa on the bench most of the game, but was unable to slow down Skylar Diggins. The senior point guard navigated too easily against Tennessee, as she scored 33 points in the contest. Diggins’ performance spoiled what was otherwise a good night that was dedicated to Pat Summit. Former players Candace Parker and Tamika Catchings were on the sidelines to show support for their former coach who is battling early onset dementia.

The Lions pulled off a strong road win in Columbus, 71-56. Despite being down 38-27 at half, Penn State came out the gates swinging in the second half with a 43-19 scoring edge. Maggie Lucas and Alex Bentley combined for 34 points in the contest. Penn State will face their first big in-conference matchup against 14th-ranked Purdue this week.

The Terps made sure there was no question on who was the better team between them and UNC in the 85-59 rout in their rematch last week. Maryland is unbeaten since their last loss against North Carolina on January 3. Reigning ACC Player of the Year Alyssa Thomas fell two assists shy of a triple-double with 17 points, 10 rebounds and 8 assists in the contest. Tianna Hawkins continues to open eyes as well with her stellar play with 25 points and 8 rebounds in the game.

The senior guard was able to force overtime with a three-pointer with 16 seconds left, against No. 23 Iowa State. Her late-game heroics continued in overtime as she scored 7 of her team’s 13 points while leading them to victory. Angel finished the game with 24 points, 10 assists, 5 steals and 5 rebounds.

This week belonged to Griner, as she shattered the record books with her big performances. The 6-8 center was dominant in both of her games last week, the last game against Texas Tech Britney had 40 points, 15 rebounds and 7 blocks.

GAME OF THE WEEK: Duke vs North Carolina

This game is for all the bragging rights in Carolina. Duke needs this win badly if they want to secure a No. 1 seed in the NCAA Tournament. Outside of California, the Blue Devils haven’t beaten any other ranked opponents, which is very alarming. North Carolina will look to build upon a solid campaign and protect their home court in the game.