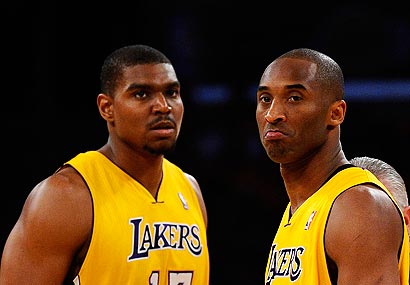 If anyone should know how tough it is to play alongside Kobe Bryant, it would be Andrew Bynum. The injured big man offered his thoughts on what Dwight Howard can expect as Kobe’s teammate, which Bryant didn’t necessarily disagree with. Per the OC Register and LA Daily News: “On Sunday he missed the first chance to play against the Lakers, but he offered some analysis of his former team. ‘They’re just struggling,’ Bynum said. ‘They’ve got injuries, and they aren’t posting the ball. So that’s tough, too.’ Bynum said the only Laker he still talks to now is Pau Gasol, which jibes with Bynum’s take that the Lakers need to use post-up offense more — as Gasol and Dwight Howard have indicated. Bynum also questioned the Lakers’ ‘commitment to defense’ and their bench depth. ‘Obviously the talent is there to win a championship — from the starters’ point of view anyway,’ Bynum said. Bynum also said: ‘Dwight’s a great player, but he’s going to have to get accustomed to playing with Kobe (Bryant) and not touching the ball every single play.’ Bynum noted that it does provide more opportunities for him now being away from Bryant, even though ‘it helped me tremendously’ early in his career that Bryant’s presence prevented opponents from double-teaming Bynum. ‘Later, I thought I was able to get the ball more and do more things with the ball,’ he said, ‘so I could definitely see how at the end it could stunt growth.’ […] Bryant agreed. ‘When you’re playing with me, you obviously have to sacrifice something,’ he said. ‘Same thing with me and Shaq. We offset each other.'”