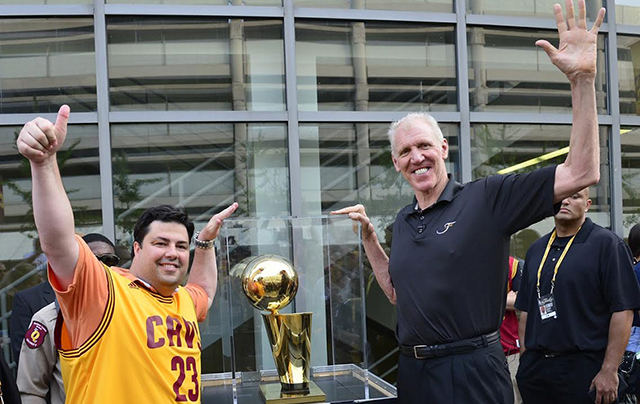 LeBron James said following the Game 5 loss in Oakland that he still feels confident despite the 3-2 series deficit because he’s the best player in the world. Even though his Cleveland Cavaliers have now dropped two straight to the Golden State Warriors, nobody is disputing that claim.

Heading into Game 6 on Tuesday, James has registered two triple-doubles while totaling 183 points. During the first three games of the series, no player had ever scored more than the 123 he put on the board. While averaging 37, 12 and 9 through five games, he’s positioned himself to win the MVP award even if the Cavaliers fall short of the title. If he does, he’ll become the first player of a losing team to win a Finals MVP since Jerry West did so in 1969.

For perspective on James’ overall performance, and how it ranks in NBA Finals History, we caught up with the legendary Hall of Famer Bill Walton. Walton was in Cleveland for Game 4 on behalf of Fan Duel, taking in the action with NBA Fantasy Playoffs contest winner Mark Rhoades of Indian Trail, North Carolina. Through Fan Duel, Rhoades won a trip to the Finals and a chance to hang with Walton throughout the night.

“LeBron has never played better,” Walton told SLAM. “He is playing at the level and the style and the control and the impact of some of my favorite players ever—Bill Russell, Magic Johnson and Steve Nash. And the greatest thing about basketball is the ability of the team to come together, no matter who the team is. LeBron, his skill package, his physical fitness level, the vision of how to play, to pull the whole team together, to inspire all these guys who nobody wanted, what he has done is inspire the whole city. He’s inspiring the whole community along the way, and really changed the dynamics of the series psychologically, emotionally and personally.”

In the wake of losing both Kyrie Irving and Kevin Love, what Walton was truly impressed by is James’ ability to lead on the NBA’s greatest stage despite the obvious adversity his team has been faced with.

“The stats are meaningless, even though they’re off the charts,” Walton added. “What he’s done is control the whole game. He’s controlling every other player with everything he does. The way that he starts the games, he plays so hard from the very opening possession. What he did in terms of setting that tone in Game 3, he was the fastest player on the court. The hardest working player on the court from the opening tap. He was committed, he was determined, he was driven to lead this team to victory no matter what it took. That type of play drives the other guys.

“What great players do, is they make everybody else believe. When you walk the streets of Cleveland, when you fly into this city, when our plane touched down and the flight attendant said welcome to Cleveland, the plane burst into applause. When I came out of the airport, there’s just Cavs memorabilia everywhere. When I walked to the Q from the hotel, to see all the fans, they believe because of him. It’s overwhelming, the enthusiasm and the excitement. When the Cavs came in people said they had no chance, and they’ve continued to compete and believe each time out. It’s just been a real thing of beauty.”

Bill Walton earned NBA Finals MVP honors himself in 1977 when he led the Portland Trail Blazers to an upset win over the Philadelphia 76ers. In the Western Conference Finals that year, he went head-to-head with Kareem Abdul-Jabbar in a four-game sweep of the Los Angeles Lakers. That season, Walton also led the NBA in rebounds per game as well as blocked shots. He would go on to win another NBA Championship as a member of the Boston Celtics in 1986.