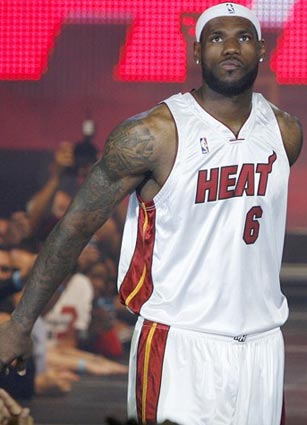 This morning I read a story about Facebook. The story cites a recent survey by something called the American Customer Satisfaction Index; among the survey’s findings are that Facebook’s public approval numbers are comparable to those of cable companies and airlines, ranking Facebook among the least publicly approved companies among humans who respond to calls or emails from companies that conduct surveys.

Also this morning, I read a story about Apple. The story opens with references to the fact that Apple has a new phone with an antenna that doesn’t work, or something, and also the coverage for this phone isn’t very good, and plus they’re arrogant. It seems people don’t like Apple very much right now.

The actual point of the story is to highlight Apple’s third-quarter earnings: Over the past three months, the company made $3.25 billion.

I’ve tried to stop reading stories about LeBron James, but most of the ones I’ve read in the past couple of weeks — as well, in part, as the one I wrote — have focused on how unpopular LeBron James has become. The main thing that has made him unpopular is that TV show he was on week before last.

The one that was the third most-watched show on cable this year.

Popularity is a funny word.

Facebook is terribly unpopular, and yet everyone is on it. “Apple is hugely unpopular” is a phrase my Mac keyboard just enabled me to type. LeBron is unpopular, but damned if we’re not all still talking about him.

Branding is another funny word.

You know who has a brand? Michael. His sells shoes with his silhouette on them. Also underwear, and a popular thirst-quencher. Magic has a brand, too. His has sold lots of stuff, but now mostly sells predatory loans to poor people. It also rents shitty furniture to poor people, both because poor people can’t always buy stuff, and because Magic is versatile.

LeBron learned a lot from these guys. Some of it he has replicated, and some of it he has not. Among the things LeBron has not done that Michael and/or Magic have done are a) drafting Kwame Brown and b) hosting The Magic Hour.

But he did choose to star in The Decision, which might fairly be compared to hiring Kwame Brown to host a late-night talk show.

Among the things LeBron hasn’t done that Michael and Magic have that he’d actually really like to do… well, there’s just the one, isn’t there? He hasn’t led a team to an NBA championship, and now, the prevailing logic says, he never will. Oh, he might win a title or two or seven, but he’ll never be the clear-cut man on such a team, and to the media, and to serious basketball fans like us, that’s important. That matters.

(It apparently matters to Michael and Magic, too. I’m not under the impression these guys held press conferences to announce their thoughts on the subject, so I have no problem with them responding when asked about LeBron’s move. But here, inspired by some Twitter exchanges last night and this morning, is my beef: The MJs didn’t offer “opinions” on LeBron’s move — they offered judgment. When Jordan says there’s “no way” he would’ve called Bird or Magic to team up, and when Magic says “that’s not what we were about,” it’s judgment on a situation they cannot relate to. They can’t relate to being seven years into a career with an undermanned team that has no reasonable hope for substantial improvement, even while the teams around them are able to strengthen their rosters. They were never in a comparable situation for a comparable amount of time. They don’t have to like it, and they’re free to say so, but for guys so famously committed to winning to proclaim they were above such a move is meaningless bullshit neither of them can ever prove.

Also, they both played on the Dream Team, and I don’t remember them apologizing for that.

It’s been fun the past couple weeks to hammer not only LeBron but his “team,” and most of it has certainly seemed deserved. But more and more, I’m wondering if they actually got it right. I’m wondering if they’re the only ones taking the long view. And I’m wondering if our clattering little club forgets who and what we are. We are not ESPN, certainly. We are not in charge of the history books, at least not the ones anyone but us will read. We are people who judge for ourselves and each other, but we lack any real influence or control; we only influence each other, and we don’t control shit.

I’m wondering if LeBron and his people don’t completely get this. I’m wondering if, as many of us expect, they’ll stack a half dozen chips over the next eight or nine years, and simply by winning (and maybe averaging that triple-double some of us are half-expecting) and staying out of any actual trouble — you know, breaking laws and shit, as opposed to just offending our collective sporting morals — LeBron will stand in 10 years as exactly what he most wants to be: the biggest brand (and wealthiest man) in global basketball, and one of the best players in the history of the game.

Because he was probably never going to catch Jordan anyway — because no one is ever likely to — “one of” will have to be enough.

And for those of us who will do our damnedest to remember everything that “happened” this summer, we will do well also to remember who we are: powerless. We’re a silly little bunch of hardcore fans, and the marketing partners pay us no mind. We hate the brand but consume the product. We hate Facebook and Apple, and now we all hate LeBron.

How’s that going for us, anyway?