Bynum Wants Yao in Round 2 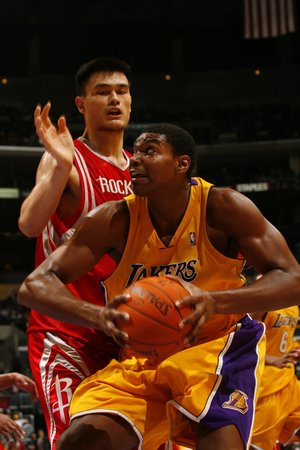 Typically, NBA players refuse to tell reporters which opponent they’d like to go up against in the postseason. To which the Lakers’ Andrew Bynum says, to hell with all that!

Bynum, currently enjoying a few days off with his teammates prior to the start of Round Two, has a rooting interest in the Rockets/Blazers series. He wants Houston to win, so that he can go mano-e-mano with Yao Ming.

The Press-Enterprise jotted down Bynum’s wishes for the next round:

Andrew Bynum had just mentioned for the third time how excited he is to face Houston’s Yao Ming in the second round when someone pointed out the Rockets still must win one more game to ensure that clash.

“Yes, but that’s who I’m thinking we’re going to play,” Bynum said, matter-of-factly. “They have two games to win one.”

“It makes me very hungry,” Bynum said. “I can’t wait to go out there against a challenging player like Yao Ming. I know I’m going to play better just because it’s a big guy I’m going to go up against.”

You know, that’s a lot of confidence for a dude who averaged a measly five points and three boards in the previous series (in which, by the way, he didn’t face anyone even remotely as imposing or good as Yao, and could barely get off the bench some games.)

Be careful what you wish for, Andrew, you might just get it.