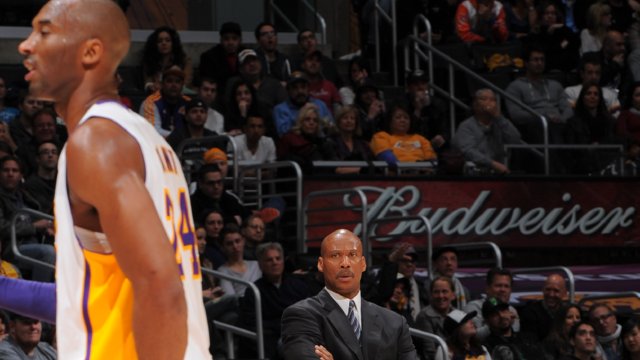 Scott is realistic, however, about the mileage and wear and tear on Kobe’s battered body. He wants to limit the Black Mamba’s minutes, and Scott says he’s not afraid to occasionally pull Kobe out of the lineup. Per 89.3 KPCC:

“Yeah, Kobe’s his own man. We know how hard he works; we know how driven he is. But I think he’s at the point too where he’s so much more mature, and he understands that he only has a few more miles left on that body, you know, maybe two, maybe three years. And I think he’s probably more acceptable to accept the fact that you can’t practice every day. There might be some games where you can’t play this game or that game. But that’s all to be determined. We have to sit down before training camp and go over some things because I can’t have him going twice a day in training camp. That’s what the young guys are supposed to do. He’s been here long enough and understands his game better than anybody here, what it takes to win. I got to use that knowledge that he has as well. I’m going to treat him like he’s an assistant coach as well as a player.”

[…] “So let me bring up a scenario here. Say there’s a game on the East Coast, went into double-overtime, and Kobe played a lot of those minutes. And then you’ve got a game the very next night. You notice that maybe he’s not moving around so good, is it going to be easy for you to tell Kobe Bryant, ‘We’re going to have to limit your minutes tonight. Maybe you take a night off?’”

“Yeah it’s going to be easy, but it’s going to be hard to probably have that happen! [Laughs] But again, he’s so competitive, he wants to win, and I do too. But I don’t want to win at the expense of having my one of my guys get hurt. And sometimes, like I said, we’re going to sit down, me and my trainer have already sat down, already started talking about the amount of minutes Kobe should probably play, going into this season. And I have to stand fast on that. I have to make sure that when he’s up to those minutes, that’s it, no matter what the game situation is, as much as I want to win, as much as he wants to win, I’m not going to sacrifice his health to try to win games.”