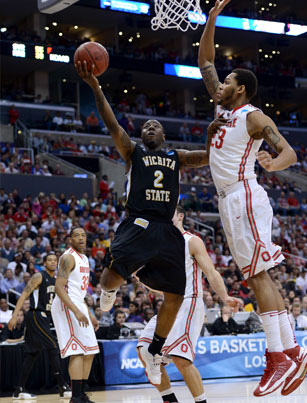 So here we are, folks, the penultimate posting of the Week in Review. And what a Tournament we’ve had—a Cinderella tale from Florida Gulf Coast, an unlikely member of the final foursome, the Wichita State Shockers, and three storied programs, accustomed to winning big games and hanging banners, on their way to the Georgia Dome in Atlanta.

Just like last week, I’ll focus primarily on the Saturday-Sunday contests—the Elite Eight. To wrap things up, I’ll throw in my two cents on the Final Four with a brief preview.

And in case you’re wondering, only one team on my coffee-stained paper bracket survived all this madness and ascended to the Final Four: the Michigan Wolverines, the single Big Ten representative still alive. Way to go Blue. Without you, my bracket is a total bust.

Is it time to start taking the Shockers seriously? When they knocked off Gonzaga, I figured the Zags just played a bad game. When they beat La Salle, I thought the Explorers simply weren’t that good. But after Wichita bested Ohio State, a loaded Big Ten crew that by all means looked like a Final Four team, well, we should probably give the Shockers some credit, shouldn’t we?

Bulldogged point guard Malcolm Armstead scored 14 points for the Shockers, Cleanthony Early had 12 points and 7 rebounds, and Wichita State held the Buckeyes to just 31 percent shooting on Saturday in Los Angeles. Midway through the second half, building on their tenacious rebounding and Armstead’s side-winding drives to the rim, the Shockers racked up a 20-point lead and were in complete command.

OSU rallied, though, as good teams do, pulling to within three points. Wichita State’s Tekele Cotton knocked down a three-pointer late and Fred Van Vleet scored with about one minute left to seal the deal for the Shockers. At haftime, according to the AP and other outlets, Wichita coach Gregg Marshall told his boys to want it more and “play angry,” and that’s what they did. The Buckeyes got 23 points from Deshaun Thomas and 19 from LaQuinton Ross (15 of those in the second frame) but never established the free-flowing offensive rhythm they’ve displayed throughout the Tournament. Everything was hard against the Shockers; Wichita State’s defense was characteristically tough, holding Buckeyes PG Aaron Craft—one of the top guards in the country—to just nine points on 2-12 shooting.

“I don’t think we’re Cinderella at all,” Marshall told the AP. “Cinderellas usually are done by this stage. If you get to this point, you can win the whole thing. You beat a No. 1 seed and a No. 2 seed—I don’t think Cinderella just found one glass slipper. I think she found four.”

Of course, Wichita State joyfully celebrated as it cut down the nets in L.A. The Shockers haven’t been to the Final Four since 1965. They’ll face top overall seed Louisville on Saturday.

No team has been more dominant than Syracuse over the last two weeks. The Orange dispatched top-seeded Indiana on Thursday, frustrating the Hoosiers to no end. High-scoring Indiana, with all that talent spread across the floor, could only score 50 points against the defensive-minded Orange (Cody Zeller didn’t get a clean look all night).

Two days later Syracuse did the same thing to Marquette, a familiar Big East foe, employing Jim Boeheim’s patented 2-3 zone and entangling the talented Eagles. Back on Feb. 25, during the home stretch of the Big East regular season, Marquette defeated ‘Cuse 74-71 in Milwaukee. This time around, playing on a neutral court in Washington, DC, the Eagles couldn’t break 40 against that swarming, long-limbed lobster trap of a zone.

“They beat us from start to finish,” Marquette coach Buzz Williams told reporters. We collectively tried everything we knew to try. It is the zone, and it is the players in the zone.”

Marquette shot 12-53 from the field. That’s just 22.6 percent! And the Eagles only hit three of the 24 three-pointers they fired. Knock down 10 of those three’s and maybe this turns into a ballgame. Syracuse only shot 38 percent from the field—it was a defensive battle all around—but James Southerland scored a game-high 16 points, CJ Fair added 13 and the Orange are heading to the Final Four. They’ll play Michigan on Saturday.

The story of this game was the gruesome injury to Louisville guard Kevin Ware, who broke his leg playing defense late in the first half. Closing out on a jump shot, Ware leapt into the air. His lower right leg shattered on the landing, the bone protruding from his skin.

“I literally almost threw up,” Louisville coach Rick Pitino told the AP. “Then I just wanted to get a towel to get it over that. But all the players came over and saw it.” The Louisville bench recoiled at the sight. Players dropped to the floor, as if they too were injured. Cardinals point guard Russ Smith wept for his teammate, and Pitino fought back tears. On the Duke sideline the Blue Devils looked shaken. Mike Krzyzewski stood still and somber.

The game was paused for about 10 minutes as doctors attended to Ware. Lying flat on the floor, he called his teammates over and told them to win the game, that he would be OK—an act that says a lot about this young man’s courage and selflessness. Applause roared from the crowd as Ware left the building on a stretcher.

At that point, Louisville had a choice: Succumb to the horror of the moment, or regain composure and play its best game in honor of Kevin Ware. After a few ragged plays, the Cardinals calmed down and chose the latter option.

They went on a 13-2 run in the second half and clamped down on defense. Louiville’s press was tenacious, per usual, and Russ Smith was spectacular. He and Peyton Siva led the Cardinals with 23 and 16 points, respectively, while tough inside man Gorgui Dieng put up 14 points and 11 rebounds. Mason Plumlee scored 17 points for Duke and Seth Curry knocked down a couple of three-pointers, but it wasn’t enough to overcome an inspired Louisville effort.

“When Kevin went down, it was devastating for all of us,” Siva told reporters. “We just came together and Kevin Ware really was the reason why we pulled this game out.”

On paper, the Cardinals are seemingly the Final Four favorite, even without Ware (who is doing well and should make a full recovery, reports say). They press like nobody else in the country—Smith and Siva have quick hands, nimble feet, and they’re lightning in the open floor. Louisville recorded 10 steals and forced 12 turnovers against Duke, a team that is extremely well coached and is rarely careless with the ball. The Cardinals play a tight zone defense, too, even if it’s not quite at the Syracuse level.

Wow, look at that final. The Wolverines whipped the Gators by 20 points on Sunday at Cowboys Stadium, behind 22 points from sharpshooting freshman Nik Stauskas and 15 from dynamic point guard Trey Burke. Michigan, which needed a heroic three-point heave from Burke to force overtime against Kansas in the Elite Eight, raced ahead early in the game and never paused to look back; by halftime the Wolverines were up by 17 points.

Florida made a little run early in the second half, but Michigan shrugged it off with some key shot-making and extended the lead to 20 points with 10 minutes left in the game.

“Seeing it all come together, I don’t what to say,’” Wolverines coach John Beilein told the AP. “I’m a little bit speechless.” Michigan hasn’t been to the Final Four since the days of the Fab Five.

Burke, Tim Hardaway Jr. and Glenn Robinson III have rightly received most of the attention this season, but some other guys stepped up against Florida. Stauskas couldn’t miss—he was 6-6 from three-point range and 7-8 from the field. His corner jumpers were falling so cleanly they didn’t even touch the rim. Freshman Mitch McGary, who was 5-8 from the field with 11 points, made some spectacular plays for the Wolverines, including a spinning behind-the-back save on a ball that was headed out of bounds. He’s got size (6-10, 250), great hands and surprisingly nimble footwork. Plus, as ESPN’s Tony Kornheiser put it, presumably in reference to McGary’s ruggedness, the big frosh “looks like he lives in the woods.”

Florida beat everybody’s favorite story, Florida Gulf Coast, on Friday 62-50. The Gators knocked down shots and controlled the fast-breaking Eagles that night. Michigan, though, controlled the Gators, who again fell short in the Elite Eight. Florida’s Kenny Boynton and Will Yeguete scored 13 points each versus the Wolverines.

With his team reeling after Kevin Ware’s awful injury, Russ helped carry the Cardinals to the Final Four. He scored 23 points, two steals and two rebounds as Louisville dropped Duke 85-63.

Synopsis: You gotta respect the Shockers, who defend as well as anybody and boast a skilled roster. But Louisville is the No. 1 overall seed for several reasons: Rick Pitino is a great coach; the press is suffocating and forces non-ball handlers (Mason Plumlee, for example) to handle the ball; Smith and Siva are electric; Dieng is playing at a very high level; and the Cardinals play stifling defense, particularly on the perimeter. The Cardinals are also playing for a higher purpose, their fallen teammate Kevin Ware. I think Louisville will frustrate the Shockers guards, even though Malcolm Armstead can handle pressure from just about any other team in the country. The Cardinals’ talent and defense will win the day.

In my opinion, this matchup boils down to Michigan’s guards vs The Zone. Syracuse struggles to score at times, and I think Michigan wins a shootout. If Trey Burke, Tim Hardaway and company can penetrate the 2-3, get into those soft spots near the free-throw line and in the paint, and avoid the trapping double-teams that Syracuse does so well, then the offense will open up and the Wolverines will put up some points. If the Orange play defense like they did against Marquette, however, it’s going to be a long night for Michigan. Michael Carter-Williams is key to the ‘Cuse offense; he’s been playing good aggressive basketball, and at 6-6 he can really see the floor. Definitely a guy to watch on Saturday. On the Wolverines side, Mitch McGary’s size can give Syracuse trouble (Marquette didn’t have a big man of comparable skill) and Nik Stauskas, when he’s hot, is a true zone-buster from behind the arc. Close game, but I think Michigan wins it.

Honestly, as much as I love Michigan and the Big Ten, I don’t think anybody will beat Louisville this season. Pitino gets another chip.

In other tourney news, my beloved Iowa Hawkeyes have reached the NIT final in Madison Square Garden! I’m amped, obviously, even though the NIT has lost a smidge of its former luster (maybe more than a smidge). But lo! There the Hawks stand, victors over Maryland on Tuesday, one of two teams remaining in the once-prestigious National Invitational. Watch Iowa play Baylor on Thursday night. You’ll like it.