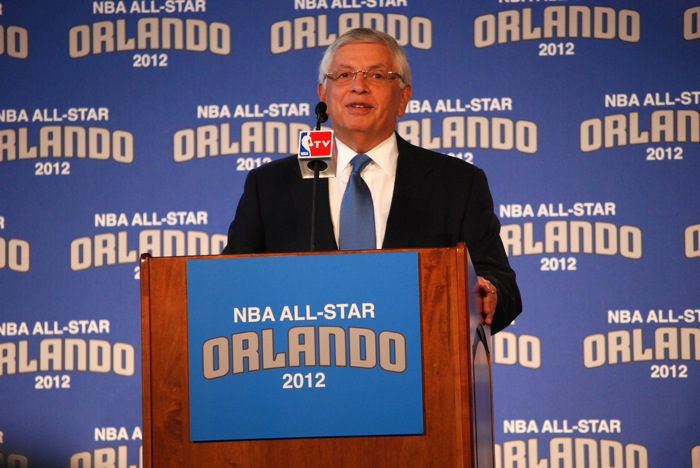 Commissioner David Stern refuses to talk about the 6-11 elephant in the room.

After officially kicking off the NBA All-Star Weekend festivities in Orlando, Stern joked about Jeremy Lin, discussed the fate of New Orleans and Sacramento and pointed out that the Sunshine State actually “offers a lot of sunshine.”

But when it came to the obvious storyline that is on the tip of everyone’s tongue, Stern wanted to keep the focus off of the future of Orlando Magic center Dwight Howard and keep it on the weekend’s events and what they plan on doing with NBA Cares and NBA Fit.

“I have no thoughts at all,” he said. “My brain is empty on this subject. I’m not going to allow this line of questioning to ruin the fact that Orlando is a spectacular city, having a wonderful All-Star Weekend. So I don’t want to feed into a heightened sense of deprivation because Orlando is anything but deprived.”

Stern stood before a crowd of young elementary and middle school students draped in red, yellow, blue, green and black NBA Fit shirts on the Jam Session court talking about the 25 different community events planned, including the All-Star Day of Service promoting health and wellness.

“We have a responsibility to encourage fans of all ages to exercise, be fit and be healthy,” he said.

He said he just wanted the fans at Jam Session that didn’t don’t have access to the main events to enjoy the sights and sounds of the NBA, and keep their minds off the subject of Dwight’s future.

“We just want them to have a good time and appreciate our game. We’ve got great players and believe it or not, Dwight Howard is not the only player in the league,” Stern said. “I’m so old I remember when Wilt Chamberlin wanted to change teams. It wasn’t invented here.”

But Howard’s impending free agency and desire to leave the host city could be overshadowed by a New York Knick you may have heard of. Flying down to Orlando probably wasn’t on Jeremy Lin’s schedule just three weeks ago. But he’s gone from near obscurity to hosting his own All-Star party and playing in the Rising Stars Challenge—something Stern wasn’t fully supportive of.

“I was overruled by ‘Commissioner Kenny Smith,’” Stern joked. “He can do anything he wants to. Backed up by Charles and Shaq, you think I’m going to play around with that power structure?”

But he didn’t joke about the effect of Linsanity on the NBA (of course, there had to be a Lin pun thrown in).

“It’s fair to say no player has created the interest and frenzy in this short period of time in any sport that I’m aware of like Jeremy Lin has,” he said

Lin’s late addition to the Rising Stars Challenge is just one of the many events planned in Orlando for the weekend. Orlando is buzzing with celebrities, overflowing with parties and congested with traffic.