David West on Leaving the Pacers: ‘I Just Want to Win’ 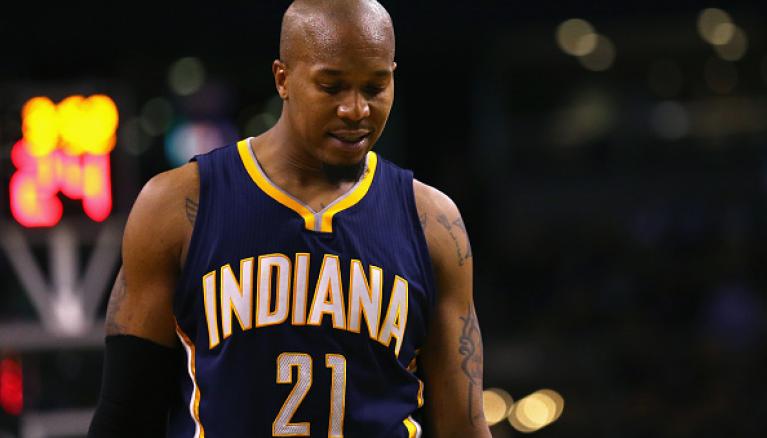 Free agent veteran forward David West is on his way out of Indiana, and he’s less than pleased with the job done by team president Larry Bird to build a title-contender.

Thanx Indy for giving me a chance…Thanx for the support over the last 4 years…Luv is Luv….

Basically West opted out because he didn't feel the Pacers could compete for a title this year or in the near future. Wants to win now.

West, 34, says he’s in win-now mode with his career winding down, and doesn’t feel the Pacers have what it takes to compete. Reportedly, West is targeting the Golden State Warriors and San Antonio Spurs in free agency this summer.

The big fella thinks Bird and company threw embattled center Roy Hibbert “under the bus” when their disappointing season came to an end.

“At this point in my career, I just want to win,” West said Wednesday night. “I’m just not sure the Pacers are in title contention right now. I’m going into my 13th season. I’ll be 35 soon. When I got to Indiana, there was hope of getting there and we played at a really high level for a couple of years. But I just don’t know if the team is in the position to win right now and I didn’t know if I’d have that opportunity to win a title if I’d stayed with the Pacers.”

“At this point in my career, it’s all about winning, and again, I don’t want to be in a position where we’re just fighting to make the playoffs, I want to be in a spot where we can legitimately taste the finals,” West said. […] Then there was this: You remember the post-season postmortem when Larry Bird all but begged Roy Hibbert to opt out of the final year of his contract? West was watching. West was listening. And West was seething. He thought it was a low-class move by the organization to, in his words, “throw Roy under the bus.”

“That’s one thing where I wish they would have handled better was the situation with Roy,” West said. “I’ll be honest with you, that bothered me a little bit, and I told Roy that. I’m the type of guy who feels like we’re all in this fight together and I’m not designed in that way to put it all on one guy. That did rub me the wrong way. That threw me off. I started reading some of that stuff, I started thinking, ‘Whoaa.’ I just didn’t feel good about that. I told Roy that it bothered me, that he’s still my teammate. […] You know, obviously Roy wants to play, he knows he’s unpopular right now, but we talked and he’s going to be a professional. He’s always been a professional. He’s had his ups and downs but he’s always been a pro and been diligent about his work. He’s working to get better. He’s going to fight. He’s not going to be one of those guys who’s going to become a locker room issue. But that was not the straw that broke the camel’s back. I just watched those finals, and I thought, ‘Man, I’ve got to give myself a chance.’ That’s the reason I made this decision.”