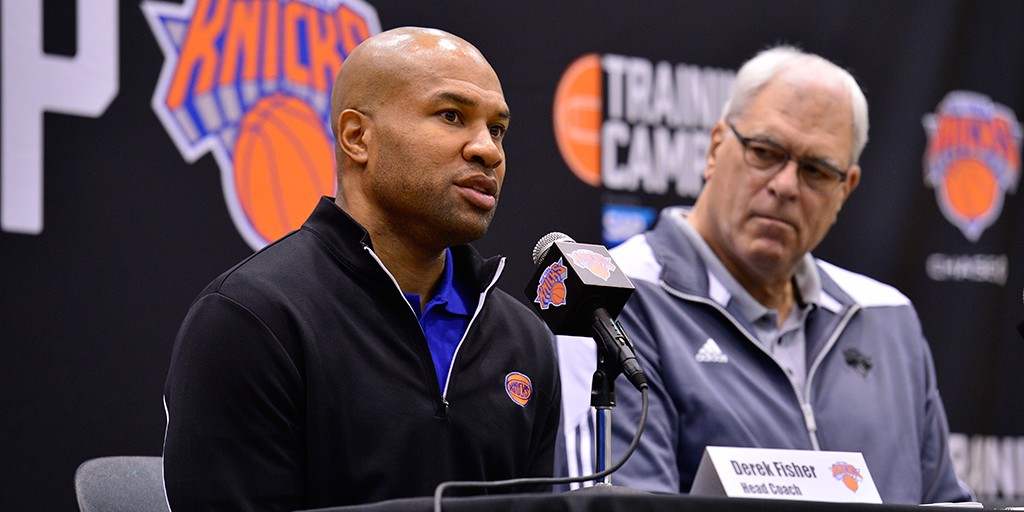 Derek Fisher has made it known that he wants to get back into the League either as a player or a coach and recently appeared on The Vertical Podcast With Woj to talk about his time with the Knicks and what went wrong.

Fisher was fired by the Knicks just a season and a half into his four-year deal and posted a 40-96 record. In the interview with Woj, Fisher was asked about Jackson’s insistence to run the triangle offense and Fisher said that he “wasn’t necessarily executing his wishes” in the way he coached:

“I didn’t come into it thinking Phil was going to demand that this is the only way that as the coach you can play with this team,” Fisher said. “Did I have a sense that would be something we spent a lot of time talking about and maybe trying to make work and implement? For sure. But my impressions were that he was still going to give me the room to explore and figure out how to coach this team myself. Not meaning I can just freely do anything I wanted. But at the same time, I wasn’t necessarily executing his wishes. I think he really did intend for me to learn how to do things on my own.”

“After talking a little bit, I wasn’t adverse to running the triangle, but I thought there were some things based on the way the game is played today compared to when we played and when we were running it and being successful, thanks to Phil’s brilliance, but also thanks to Kobe, Shaq and Pau Gasol and a lot of great players, I thought there were some things we could do to take advantage of not only our personnel, but also the way teams defend in the NBA that I wanted to do differently. At times we were ok and saw eye-to-eye and at times we didn’t.”

Of course, the lasting legacy of Fisher’s tenure with the Knicks was his now infamous altercation with Matt Barnes. Fisher admits that he was not proud of himself for putting himself in a position where he “became the focal point:”

“Looking back, I don’t regret going to see my kids on Sunday. But I shouldn’t have put myself in a position where what happened that Saturday night happened,” Fisher said. “As a coach, if a player had come to me and said, ‘I want to spend the day with my kids’ − as long as he was back to practice on Monday, I would’ve supported that. Then if I had read about something happening to him Saturday night, I would’ve been disappointed as well. Looking back at it from that perspective, I hate that I put myself in a position where I became the focal point.”