Despite Being a Heavy Favorite, The Cavaliers Have Some of Cheapest 2017 NBA Playoff Tickets

The cost to see an NBA Finals game last year was amongst the most expensive finals tickets ever. With a series average of $1,596, it marked the beginning of an extraordinarily expensive run of major sports championship tickets that culminated with the most expensive World Series TicketIQ has tracked in eight years. Over the next two months, the road to the 2017 finals will likely go through Cleveland and Golden State. For fans who missed out last season, the good news is that prices for Cavaliers and Warriors playoff tickets are cheaper than they’ve been over their recent run of playoff success.

The cheapest ticket to see the Cavaliers face off against the Pacers in Cleveland for Game 1 was $27, which makes it the 5th least expensive opening round ticket in the 2017 NBA playoffs. At 19/5 odds to win the NBA title, the Cavaliers are the favorite in the Eastern Conference to reach the NBA finals. At 250/1 odds, the Memphis Grizzlies are the second longest shot to win the finals, however, the cheapest ticket to see a first round game at the FedEx Forum is $22, just $5 less than in Cleveland. For fans that are looking to see Lebron further his place as the greatest of all time, it’s a deal almost too good to pass up. 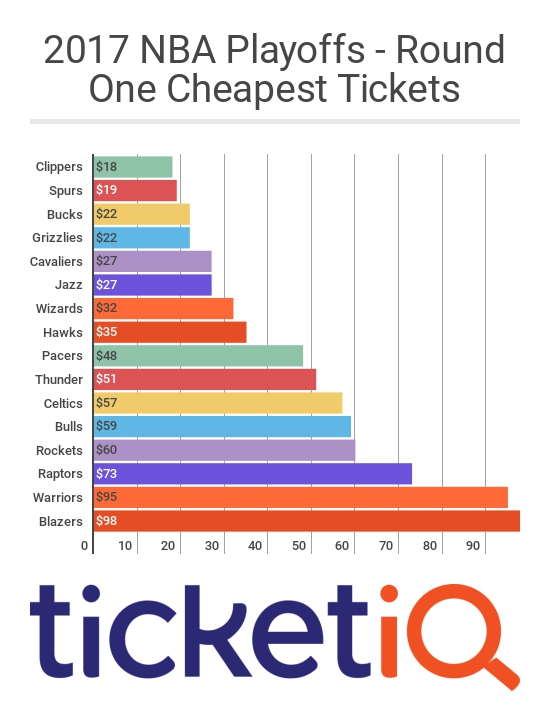 With the cheapest tickets for a round one game at Oracle Arena going for $95, Warriors fans, on the other hand, are paying more than any fans expect the Portland Trail Blazers. At 300/1 odds to win the NBA championship, the Blazers are the longest shot in this year’s post-season tournament. Prices in Portland, however, are more the result of a very small resale market than that are of high demand. For Warriors fans, prices for round one tickets this season are down over 30 percent from last year, despite being the favorites to win the NBA Finals.

While much of the coverage of the ticket market focuses on the extraordinarily expensive events, for the 2017 NBA playoffs, every team has ticket available under $100 for the first round. For the NHL playoffs, only half of the teams competing for Lord Stanley’s cup have tickets available under $100for their first round series. While affordability is a them, the team with the cheapest ticket for a first round series is also one of the favorites to go deep in the playoffs. $18 will get you a ticket to see the Spurs take on the Grizzlies in the first round at AT&T center. After food and a couple beers, tickets will end up being the cheapest part of the night, which is unusual for any playoff game.

If the Warriors are able to return to the Finals, there’s a chance that they’d have to face off against the Thunder and MVP-favorite Russell Westbrook. If that happens, prices in Oklahoma City could reach historic highs. If that were to happen, it would be amongst the most hyped Western conference finals ever with Kevin Durant coming home for as many as three games. In the meantime, Thunder fans don’t seem to have lost their playoff enthusiasm, and they’re paying more for tickets on the secondary market this post-season than last year.