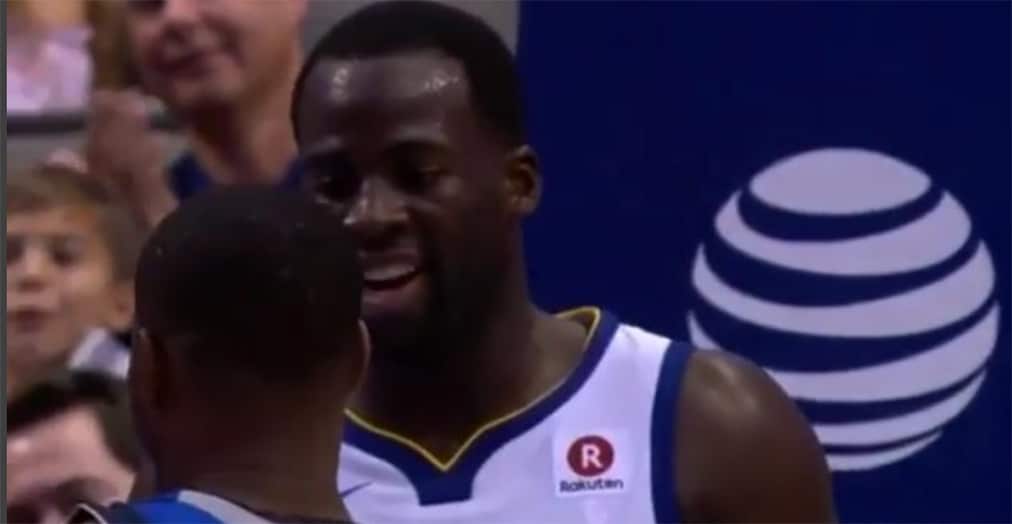 The Warriors put the hurt on the Mavericks last night, coming away with a 133-103 win. The game was over pretty quickly but Draymond Green made sure to keep the things interesting.

In the third quarter, Mavs rookie point guard Dennis Smith Jr drove baseline and tried to rise up over Green. Green fouled him at the rim and immediately started talking trash.

Watch the video below:

Afterwards, Smith spoke to ESPN about what happened:

“I don’t know what he was talking about. He can’t say nothing. He fouled me. It doesn’t even make sense.

“I was just laughing at him. He’s rambling on about nothing. It ain’t like he blocked it. He’s just rambling, and I laughed at him.”

“I’m not doing it just to let people know I’m not backing down. I’m just not backing down from nobody. That’s just how I am. All that extra stuff, I don’t really dabble with all that. That’s about it. I just handle myself accordingly.”

Green, via ESPN, also went on to say postgame, “Yeah, that s— ain’t happening. This ain’t summer league, bro. Not just gonna dunk on nobody. Better luck next time. Never. That ain’t happening. Come on, dude.”

Draymond finished with 10 points, 8 assists and 7 rebounds while Smith had 10 points on 3-11 shooting. These two teams meet up again on December 14.