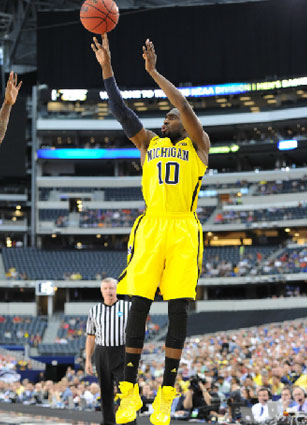 It’s 68 degrees and sunny in Atlanta today. That may not be headline-making news from where you’re sitting, but in the A, that’s huge—especially lately. No joke, it has rained on and off just about every day for the last six or seven weeks. It has not been a good look for playin’ tennis, rockin’ new kicks or doin’ much of anything outside. But leave it to the Final Four coming into town to clear out the clouds.

But the irony of it all is that with the great weather comes a flood of people into the city. Some estimates have the population going up about 100,000 this weekend. While most folks are here to root for Wichita State, Syracuse, Michigan and Louisville, downtown is looking like Freaknik ’93 because of concerts (My Morning Jacket, Ludacris, Sting) and fan events, too. At this very moment, I’m working my way through the glut of revelers to the Georgia Dome. When I find my spot and get a decent wi-fi connection, I’ll be back to be your courtside eyes for the night…

…Okay, finally made it to the upper press box. I would have been here about 30 minutes ago, but literally no one  knew where my section was. Very, very odd. But hey, all’s well that ends in section U1, seat 84, right?

-Underrated Atlanta R&B singer Avery Sunshine, with the help of the Ebenezer Baptist Church choir, just murked the national anthem. Sure hopes this helps put a lil’ light on her career. The lady can sing.

-Not sure how well it’s translating on the tube, but Wichita State’s crowd is a throaty bunch. They have a decibel or two on Louisville right now.

-The Cardinals are averaging 80.2 points over their last five games. Ummm, they’re on pace for 0 right now.

-During the break, the Georgia Tech men’s basketball team comes out to receive a ceremonial basketball for being the host school. It’s a shame that’s the closest the Jackets have been to the Final Four since 2004.

-Kinda poignant that Russ Smith would score Louisville’s first points. The young man is coming off a season where he scored the second-most points in Cardinals history (718).

-At the 11-10 break in the score, the Mary Hardin-Baylor and Amherst teams come onto the floor. They’re playing in the Division III title game at neighboring Philips Arena tomorrow. The squads look around at the crowded Dome like little kids at Disney World. They pull out cameras and smile widely. It’s cool that the NCAA decided to give them a taste of the spotlight this year.

-The jumbotron flashes to a courtside Kevin Ware at the tail end of a timeout. He gets a respectable amount of applause, but I don’t think a lot of people were really looking up at the time to fully acknowledge the dude.

-I know that the VCUs and Butlers of the world have cooled our excitement about smaller schools making it to the Final Four, but you gotta give these Wichita State Shockers some credit. They are holding it down out here. If you overlook the 28% from the field, they’re looking like a confident team on the floor.

-If my totally unscientific calculations are correct, about 65-70% of folks polled on different sports sites said that Louisville would win tonight’s game. In between bites of chicken wings and nachos, I can hear that other 30% giving a collective “I told ya, homie” at the break.

-Because of the Tournament’s 75th anniversary, it’s acknowledging the greatest team and moment in tournament history at halftime. Both are two of the most obvious selections you can imagine: Bobby Knight’s undefeated 1976 Indiana Hoosiers and this shot from some guy at Duke.

-Starting to hear some Boooos from Louisville’s fan section at the 38-31 timeout. That’s the first sign that a group is getting a tad nervous.

-And with Cleanthony Early’s last three (15 pts for the game), we’re starting to see Syracuse fans cheering for the Shockers.

-Louisville’s Luke Hancock is not only giving solid production in the game (11 pts, 4 boards) but he’s being quite the cheerleader on the sidelines, getting the crowd pumped with his hand motions in the air.

-Before that Harlem Globetrotters-like dribbling exhibition from Wichita State’s Malcolm Armstead, you almost would have forgotten he was out there. If the dude was putting up even half the numbers he usually does, this one might be Wrap City.

-Okay, so the jumbotron pans back to Ware on the sidelines. Much better response from the crowd this time around.

-It’s a good thing we’re only about a 5-minute drive from Grady Memorial Hospital because Rick Pitino almost had a heart attack with Early’s three-point play.

-There are over 5 minutes left in the 58-56 affair and Louisville already has more points this half than it did in the first one.

-The Cards’ full-court press might be getting a little too close for the Shockers’ comfort. They’re gonna will themselves to a half-court violation in a second.

-The Luuuuuuke! chants are loud with a rebound, but they get downright ridiculous with Hancock’s trey to give the Cards a 65-60 lead with 1:58 on the clock.

-Raise your hand if you had the final minutes going down as the Cleanthony Early vs. Luke Hancock show… mom, put your hands down!

-The tension is so thick in the building that even Ware is standing now. Cameras pan to the kid and the building erupts. Whatever screws were still in place certainly unhinged with Smith’s first made free throw.

-All righty, Cardinals Nation, that was a close one. 72-68, Louisville. Helluva performance from Wichita State and Mr. Early. With so many freshman on that roster, this won’t be the last time we hear from them on the national stage… But alas, it’s Louisville heading to its first national title game since ’86. Somewhere LaBradford Smith and “Never Nervous” Pervis Ellison are smiling.

-The other day ESPN’s Andy Katz predicted the Louisville vs. Wichita State contest would be like a JV game compared to the Michigan vs. Syracuse varsity affair. Well, Mr. Katz, if that was a JV game, I’m not sure what I was playing back at North Atlanta High School in 1992. The Wolverines and Orange have some big sneaks to fill in about 27 minutes…

-Game 2 is moments from tipping. If the Michigan Wolverines are half as mean as Glenn “Big Dog” Robinson just looked on the jumbotron, they’ll be fine.

-If we’re predicting the game based off crowd wattage, the final score will be something like Michigan 86, Syracuse 61.

-I know it’s a nostalgic thought –Not to mention a breach of contract with adidas– but how ill would it have been had the Wolverines come out wearing black ankle socks and these vintage Nike joints?

-The Wolverines might have the loudest fans, but these Orange, especially C.J. Fair (9 pts), don’t seem the least bit worried about crowd noise. 14-14 with a little under 11 minutes left in the half.

-During that last break, some Syracuse fan was shouting at CBS’ Greg Gumbel about something. Gumbel played along for a while. The dude threw his Orange jacket towards Gumbel. He threw it back. The dude threw an orange foam finger next. Gumbel threw it back. Not sure what else he had to toss to get security’s attention.

-If you told Michigan coach John Beilein that he would be winning the game 28-21 with 4 minutes left in the first and his star Trey Burke would be scoreless, he would have said you were nuts.

-One quick note from the earlier game. Peyton Siva managed just 9 points on 1-of-9 shooting in the win. When asked if playing in the cavernous Dome affected his shot, he laughed and said, “I couldn’t really see. It was too far away.”

-Burke’s first points come on a crowd-rocking three with 58 seconds left in the half. Ahhhh, I see what the National Player of the Year was doing; just giving his co-stars time to shine before coming through with a meaningful shot to close out things. Michigan, 36-25.

-For our halftime entertainment, we meet the the Tournament’s 75th anniversary team. All the folks you’d expect to make the 15-man squad -Bill Russell, Kareem Abdul-Jabbar, Oscar Robertson- are announced. Former Kansas star Danny Manning gets a nice round of applause from the Wichita State contingent. Ohio State legend Jerry Lucas gets a mix of cheers and jeers from the unforgiving Michigan faithful. Duke immortal Christian Laettner gets showered in boos from everybody not in an usher uniform.

(Excuse the delay in updates. There appears to be some internet issues in the press box. I’ve never quite understood why this happens so often. At the top of the venue’s checklist before a big event should always read, “Have enough bandwith for the press box.”)

-Much like in the first match-up, the teams have a bit more hop in their legs for the second half. If the Orange don’t put a dent in the scoreboard, it won’t be because of Rakeem Christmas’ hustle and C.J. Fair’s offensive muscle (20 pts).

-For all the activity that’s happening on Cuse’s side of the court, they’re still on the wrong side of the score. Fair has them within six though, 45-39.

-A huge roar comes from the Wolverines section. I don’t see anything at first glance, but when I squint, I see Michigan football star Denard Robinson in the sea of maize.

-The official attendance for tonight’s action: 75,350. I wonder if Lawrence “Poetry in” Moten is one of them…

-Atlanta mayor Kasim Reid hits the jumbotron. Not a single clap in the house. Damn, the man has to be somewhat responsible for the evening’s festivities, right?

-Okay, Michigan, you have one -count’em, one!- timeout left. You all have a history of losing track of those kinds of things.

-James Southerland with the emphatic dunk to bring the Orange within four, 53-49. He almost doubles up the highlights with a quick steal.

-The score in the building goes to 59-51 after the Brandon Triche and-1 attempt. The Syracuse followers immediately point to the scoreboard in a huff and have the tally changed to the proper 57-53.

-Triche fouls out. Michael Carter-Williams is already on the bench. 19 seconds without your starting backcourt probably feels like 19 hours right now.

-61-56 final. A literal sea of complimentary seat cushions hurls through the air. Not sure if it’s from happy Michigan fans or pissed-off Syracuse ones. Either way, we have the showdown most folks seemingly wanted for Monday: Louisville vs. Michigan.